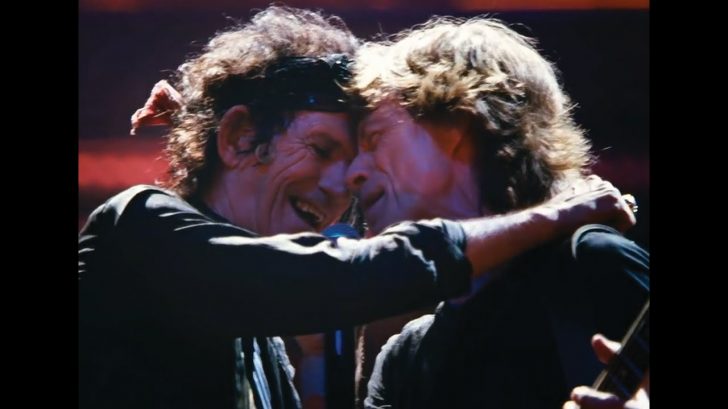 They big duo of the most important rock band of all time, they have traveled the whole world together singing songs that are anthems for their millions of followers, they have thoroughly enjoyed what is the most absolute success, but still thus, between them things have not always gone as well as might be expected. And it is that Mick Jagger and Keith Richards star in one of the most curious relationships in history.

Their relationship goes back a long way, long before The Rolling Stones consolidated themselves as the powerful band that was and is that they grew up together in the same town in southeastern English.

Life made them stay together and come together creating one of the most iconic bands in history, but nothing and nobody made their relationship an easy road. Despite what could have been expected of it, Mick Jagger and Keith Richards became two true “Intimate Enemies”.

They were six years old when Mick Jagger and Keith Richards became classmates at Dartford Elementary School. This is how their friendship relationship would begin, which would grow over the years. After their first years in their hometown, the two would move to London together ready to start their musical career. Together they shared a flat with what would later become another of The Rolling Stones founders, Brian Jones.

Since the formation of the band, The Rolling Stones brought audiences and critics together and little by little they became one of the most influential bands in history. Some of his songs are among the best songs in the history of music and laid the foundations of contemporary rock. In addition, it is one of the few musical groups that can boast of having such a long and lasting career. Even so, they did not always have good times and experienced periods of crisis, some of them caused by the bad relationship between Jagger and Richards.

Apparently, in the 80’s Mick Jagger refused to do a promotional tour of the album “Dirty Work” due to the relationship he had with his partner and embarked on a solo tour. And is that some members of The Rolling Stones combined their work with the band with their solo careers. It was also in the 80s when Keith Richards gave Mick Jagger a nickname that would end up deteriorating their relationship.

Keith Richards gave Mick Jagger a nickname that would end up deteriorating their relationship. Brenda Jagger, that’s how Richards began to call his partner and supposed friend after discovering the name of a British writer. Thus began a time when Keith Richards used that name for Mick Jagger in a provocative way, knowing that the singer did not like it. Keith Richards even made public comments referring to “Brenda” leaving the media stunned.

Although the bad relationship between them was more than evident, the group continued to give concerts all over the world. The music seemed to calm the differences between them and decade after decade the Rolling Stones continued their career, that yes, visibly deteriorated. And is that time does not pass in vain and less for rockers as they were (and still are) the Rolling.

The Publication of “Life”

This whole story got murkier than ever when Keith Richards’s autobiography “Life” was published in 2010. In it the guitarist expanded on his partner with quite hurtful comments. In addition to criticizing his “diva” attitude, Richards assured that his partner had a micropenis and that he was a “maniac and a fanatic of power.”

Following the publication of the book, Mick Jagger wrote a letter to Keith Richards responding to his allegations. Although the letter never reached Richards, people around Jagger published some of its content. In the aforementioned letter, the singer said things such as that his partner “had not written a good song” for almost four decades, criticized his relationship with drugs and even gave details about arrests and accusations of drug trafficking and possession.

50 Years of the Rolling Stones

Surprisingly, The Rolling Stones remained united after this cross accusation and even went further. Keith Richards even hinted that for the money that the new tour would give them Mick Jagger was able to forgive their statements. So the band returned to the stage after having hinted once more that the celebration of their fiftieth anniversary, in 2012, would be the perfect excuse for their final separation.