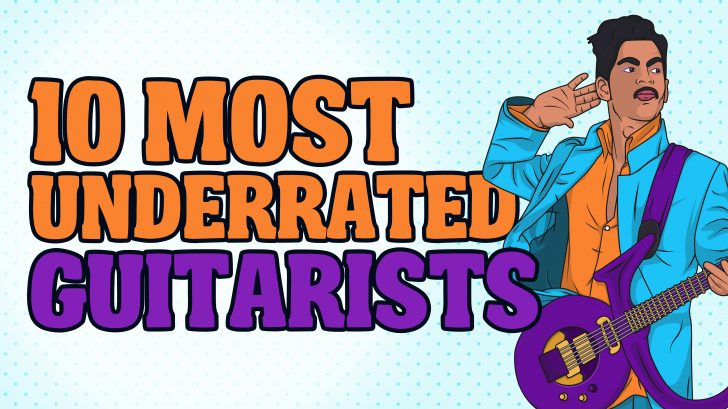 The Way They Get Things Done – They Deserve Even More!

Music has always hit people. Either you’re a blues fan, prog rock, heavy metal, hard rock, punk rock, etc… Some people would prefer slower blues tunes and find the playing on the slower songs more emotive. But for whom do we credit these amazing tunes? Yeah, the guitarist. Without these awesome guitarists, we would never have the sounds that we have so long desired. Most of the amazing guitarist are being overlooked, not being recognized for their amazing works. We are far too caught up with the image in front of us, we simply ignore the people who are responsible behind the scene.

Alex never really got the credit as a guitarist he deserved. Seems like it’s really hard to stand out and shine when you are in a band playing alongside with Geddy Lee and Neil Peart. Alex surely was very creative in his works, none of the any 80’s guys ever wrote on the scale of “2112” or “YYZ”.

Rush has been pretty successful for the past years, everybody talks of how great Geddy’s voice and how virtuoso Neil Peart is, but no one ever talks about how good of a guitar player Alex is. He deserves far more credit.

Billy Howerdel is definitely one of the best guitarist alive when it comes to playing the guitar with feelings. He creates an atmospheric sonic sound than any other guitarist could ever dream of. He’s good and very talented. Although he doesn’t stand out as a flashy guitar player or he never really did some fast shredding, you still got to give him credit for his creativity. Yeah, sure it might not be your style of music, but Billy Howerdel is definitely a great guitarist.

He always plays on the oddest tuning and has the most of the coolest guitar melodies. If you haven’t heard of A Perfect Circle, you should check them out. You probably know the vocalist from Tool band, Maynard James Keenan.

He may not be the best in other people’s opinion, but he certainly was a brilliant guitar player. So why is he never on any top lists that we have seen? Prince definitely got some sweet sound playing going on. The only bad thing is that he lost focus on being a great player because he was so iconic as a musician and a pop singer. But either way, if we are talking about the talent he should be in there. We have to acknowledge him, his versatility speaks so loud.

It seems that his skills will only be acknowledged by other musicians or aspiring musicians who have a better understanding of music.

If you ask a fellow guitarist in your midst if they know who this guy is, they definitely say, “WHO THE HELL IS NUNO BETTENCOURT?” That’s a shame, he really was and still is an incredible guitarist and an amazing musician. Extreme was always been known because of Cherone, people never really had any idea that they had a great guitarist such as Nuno Bettencourt.

He is mostly underrated because ass riders and mainstream hog hats will always toss Slash or Zakk Wyle in a higher rank. As for the playing ability and songwriting skills, he is definitely one of the tops!

As big as Three Dog Night came to be in the 1970’s, you don’t often hear Michael Allsup being included as one of the greats. There isn’t much of an info about him. He was definitely an overlooked bad arse! He had a great tone and great touch. Every guitar player should aspire to be as good as he has been. As one of the instrumentalists in Three Dog Night, he never really got any much of an attention, which is really a shame. I guess, for not really writing their stuff, Three Dog Night was not really taken seriously and perceived as… But that being said, they were a talented band and Michael Allsup deserved to be credited as a great guitarist.

Another great Canadian artist who is considered as underrated. Not only underrated but also an underappreciated guitarist of all time. He deserves to be put on the same pedestal as recognized guitar greats. Maybe, if he were only an American or British, he would have been considered as such. As Triumph being overshadowed by Rush, another trio. They never seemed to get enough credit that they deserved.

If anyone could only get the chance to hear some of his works. So, you should check them out. Rik Emmett really did some great pieces of stuff! Rock, Metal, Jazz, Blues, Celtic, Classical. You name it, he’s done it.

Great guitarist and a man of many talents! Every possible thing you would hear about Steve are inspirational. He pushes himself too hard and it makes you want to do those similar things too. Politics in the music industry has left musicians such as Steve Lukather out of the limelight.

Not considering him on the list of the greats is why every list are lame. Just because he doesn’t have the Rockstar image, he doesn’t get the credit that he deserves. You don’t need to be a fan to recognize people with great talents. Steve Lukather is mostly overlooked in those (useless) lists.

Underrated? Totally! Many well-known guitar players have considered Gary Moore as their influence. He was a phenomenal guitarist, a monstrous one, a bluesman virtuoso, and pretty darn good singer! We should all appreciate a legend like this one. He was certainly a special player who was often overlooked. His vibrato technique are unspeakable and definitely exceptional and his speedy runs really made other guitarists look like amateurs.

The fact that the critics never liked him that much is hurtful. The hell with those critics, the best will always be the best! Gary Moore will always be a true guitar hero!

Lindsey Buckingham is definitely one of the most overlooked guitar player. The only thing that undercuts his image as an amazing guitar slinger was his success as a pop star.

For Fleetwood Mac fans, I guess, they’ve always appreciated him as a great axe slinger. He’s pretty brilliant, not only as a guitar player but as a songwriter too. He deserves to be on the list.  A killer guitar playing mofo and very underrated. One thing for sure, if Lindsey Buckingham never joined Fleetwood Mac, FM would have been just a pimple in rock history. Nuff’ said.

People only know the Queen because of Freddie Mercury. The stage presence of Freddie Mercury overshadowed the existent of Brian May. Although, he never really wanted to be the person that controls the crowd. But he did his job amazingly well, he always put out the best guitar riffs and always show the “feel” performing on stage. He has the most amazing and recognizable tone of all time.

In terms of being underrated, Brian May is very. He is a superb guitar slinger. You will never ever see him topped the list. Rolling Stone only had him at 26 (I think).