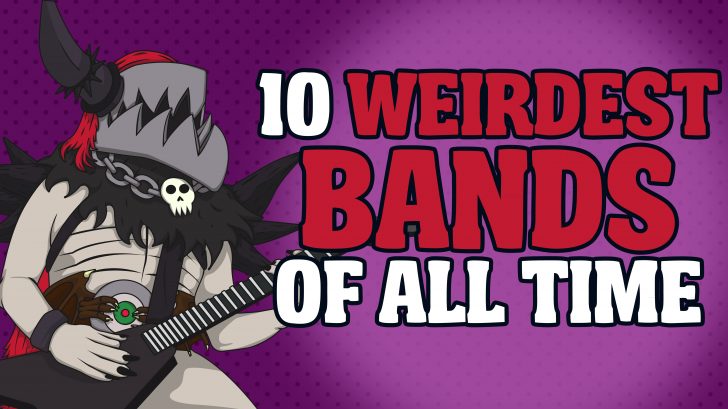 There are bands who are generic and would not take any risk to become successful and then we have the wackos! I don’t know if they intentionally set out to be weird or is it just us who look up to them as weirdos. Most of these bands are great musicians. The things they do proves them to be unusual and that convinces us that they are worthy to be considered weirdly insane (in a good way). So they are weird, so what? At least they are not boring… This being the case, here are the 10 most weirdest bands of all time!

Huuh??? What kind of a name is Butthole Surfers?

It’s a weird rock band formed by Gibby Haynes and guitarist Paul Leary in 1981. The band’s name bothers me a lot. What the hell does it mean? We don’t need a band to be named at this point of weirdness…

Although, Butthole Surfers were kind of a hit back in the day. You just can’t stop to wonder why a psychedelic band turned into a mind-bothering buttholes. But, the good news is some of their music are really good to listened to. Check them out…

We just don’t realize it, but they are the one of the weirdest band!

An American alternative rock band formed in 1984 by Gene Ween and Dean Ween. The weirdness of this band is on another higher level… They are kind of weird but not weird just for the sake of being weird.

The thing about Ween is that there is no any other band could do the same that they do, they play their music in a various way. If you would listen to their music shuffled on your playlist, it makes you wonder that it’s always the same band but sounding differently each song…

The most violent, unforgiving, punky, jazzy and weirdos.

Formed by saxophonist and composer/song writer John Zorn on 1988. In the eyes and ears of many, certainly Naked City are one of the biggest weirdest wacko in the history of music. They are musically insane.

How do you put up a mixed sound and still some relevant in the most awesome way. For the sake of music, Naked City, explores, experiments and at the same time are fun! (Though they sound sometimes pretentious.)

That is to be expected with weezer.

A band formed in Los Angeles in 1992. They are a fun band to listen to, though they have made some weird music and most of them are great. They are consider weird because of how they look, nerdy and freaky.

Great thing about this band is that they can produce some cool stuffs and they are actually good at doing them. Without a doubt that this band are one of the weirdest but also one of our favorites…

What the hell is goin on?

Known for their eclectic style, an experimental rock formed in 1985. If you are familiar with Mike Patton of Faith No More, this was actually his first band. Odd thing about this band is that, their music is mixed up with different elements. They are so weird that devils spat them back out from hell to haunt us.

Well, if not for Mr. Bungle, some of the most successful metal bands would not have ever existed. Korn, Slipknot and Limp Bizkit. They’ve got their crappy music influence from Mr. Bungle…

Give me mac ‘n’ cheese or you are going to hell!

An American Parody heavy metal tribute band formed in 2014. WTF?! How weird a band can get? I don’t know if it is insulting to the great Black Sabbath or this band just love Black Sabbath and McDonalds at the same time.

This is definitely brilliant, the things they think up. Even their bassist is pretty impressive, playing in that kind of get up and still able to nail every notes. That’s friggin awesome…

You won’t believe that a band like this one actually existed!

The band who had been making music since the early 70’s. (Never had any idea that a band like this existed in that era). You will find them weirdly fascinating for their extensive genius catalogue of weird music. The band also successfully attempted to be anonymous over past years.

The Residents have that experimental attitude and sort of subversive, their music are definitely not radio friendly… Wonderful and schizophrenic musician. Nuff said…

Let there be gwar!

“Gwar, often styled as GWAR, is an American heavy metal band formed in Richmond, Virginia in 1984”. Gwar is not for the faint-hearted. This get weirder and weirder! Gwar live shows are definitely famous from spewing fluids of fake blood over the crowd. It makes you really feel that you are in the middle of a war..

And when it comes to weird costumes, no one comes close to them. Calling them humans will get you in to trouble because they are always kind of angry.

Wow! This is guy scary weird!

Brian Hugh Warner was born on January 5, 1969, professionally known as Marilyn Manson. Marilyn Manson was actually a band Manson played with, but he took the name for himself. Tell me if this is not one of the creepiest dude in the planet!

Scarier most of the time but his music are definitely awesome! A mixture of the most famous sex symbolic name, Marilyn Monroe and the famous notorious criminal Charles Manson, what did we get? This guy!

Give us the new album already!!!!

“Tool is an American rock band from Los Angeles, California. Formed in 1990, the group’s line-up includes drummer Danny Carey, guitarist Adam Jones, and vocalist Maynard James Keenan. Justin Chancellor has been the band’s bassist since 1995.” The most genius progressive rock band in the planet! How did an amazing creative band turned out to be weirdos?

Well, for one thing is that on their live performances, the vocalist hide besides the drummer wearing weird costumes and sometimes covered in paint, mostly naked. A bassist who paints himself red and white, the guitarist who shows a lot of weird and creepy pictures and a drummer in a Lakers Jersey every time! Hey! But every music of Tool are masterpiece!!! We can’t wait for a new album to be release!