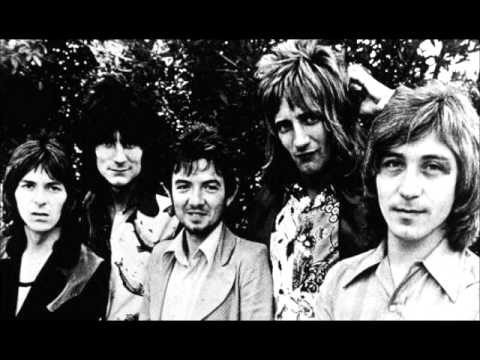 As a band, Faces were short-lived too: barely 5 years. At that time four good studio albums and a live show. Let’s focus on what’s important because here we’ve come to talk about the greatest Faces songs, which were completed with nothing more and nothing less than the huge Rod Stewart and Ronnie Wood.

This ‘Stay With Me’ by Faces is a great song, whatever we get. A song that raises a dead person, that raises the spirits of anyone, and that immediately makes you sing and dance. The most powerful sound of the Faces is found in songs like this, hard rock like the top of a pine tree that dances to Ronnie Wood’s guitar and the ragged voice of a sublime Rod Stewart. Those of you who associate Stewart with pop songs, ballads, or ‘Da Ya Think I’m Sexy’ hit play and let your jaw drop.

Beautiful folk-rock that offers us ‘Oh La La’, a song that also gave its name to the last and already dysfunctional album of the band. With the group broken into two parts, with a Rod Stewart in his tracks after achieving solo fame, and the rest fed up with the singer’s attitude, the album came out in fits and starts. Along the way, this is what is undoubtedly one of the best songs of the Faces and one of my favorites, with the peculiarity of being Ronnie Wood the one who gives the main voice and not Stewart or the secondary Lane.

Faces achieved magnificent halftime in this ‘’, a song that undoubtedly grows thanks to Stewart’s ability to carry out interpretations full of feeling and emotion. All this without removing an iota of merit and award for the excellent instrumental part on which the singer relies. This song opened the second face of his first album ‘First Step’ (1970), and it is hard to believe that it did not gain greater relevance at the time but, of course, you fought for a niche within the rock elite in 1970.

‘Bad N’ Ruin ’is the perfect example of what Rod Stewart could have been if he had not wanted to become the Rod Stewart we know – with all due respect. Los Faces shine with one of their best songs in the form of cañero, playful and salutary rock included in their second album ‘Long Player’ (1971). The boogie touches that would accompany them throughout their careers. And a surprise: this hit was not considered to be a single from the album.

An excellent ballad that could not be left out of this list with the best songs of Faces. There are ten, but the preselection was somewhat longer. This song is pure radio formula, pure FM. Why? Has it all. His calm rhythm, acoustic guitar, Stewart’s voice, a great mix for those classic rock stations. A theme that never fails. And if you hurry me, a perfect song to accompany you on any car trip worth it’s salt. If the wind hits your face, you earn extra points.

If this version of Paul McCartney’s Maybe I’m Amazed has made its way onto this list with Faces songs, it’s because it deserves it. Do not hesitate it for a second. The version that the Faces do is so good that they appropriate the song and make it their own. Yes, the original is very beautiful, but here Rod Stewart, Ronnie Lane, Ronnie Wood, and the company manage to surpass it in this live recording from 1970.

Had Me a Real Good Time

Another undeniable classic of the band. The song is a marvel from start to finish, a delicious boogie rock that makes its almost six minutes of the song very short. On ‘Had Me a Real Good Time’ the Faces were really having a good time and with this song they put the perfect finishing touch on ‘Long Player’. His B-side began. A very party song that will get your ass off the seat, promised. Also, a very Faces sound and vibe.

Almost slum in its sound. With clear and notorious influences from the recent ‘Sticky Fingers’ released by The Rolling Stones, Faces build one of their best songs. Again I am left wondering what they would have been as a group if Rod Stewart had focused his career on the band, if “Maggie May” had been released under the group’s name as planned and rehearsed. ‘Miss Judy’s Farm’ will make you move that ass again as it digs into your guts.

We added another song with a non-Stewart voice to this list of Faces’ best songs. This is Ronnie Lane’s turn, who is accompanied by the frontman of the band making vocal harmonies that sound excellent. A beautiful ballad, magnificent halftime that works great from beginning to end. Going back to ‘Sticky Fingers’ by the Stones, it leaves me with a certain memory of ‘Wild Horses’, I don’t know why. You will tell me if they have a certain resemblance.

Magnificent blues-rock, in ‘Cindy Incidentally’ the Faces draw on pure rock and roll roots to build an excellent song. If even Rod Stewart sounds great and seems to sing with a huge reluctance. That’s how good these guys were. It reached number two on the charts in the UK, becoming their biggest hit in the country. Found on their last album, then they would only release their album live and tour until breaking in 1975, without Ronnie Lane.