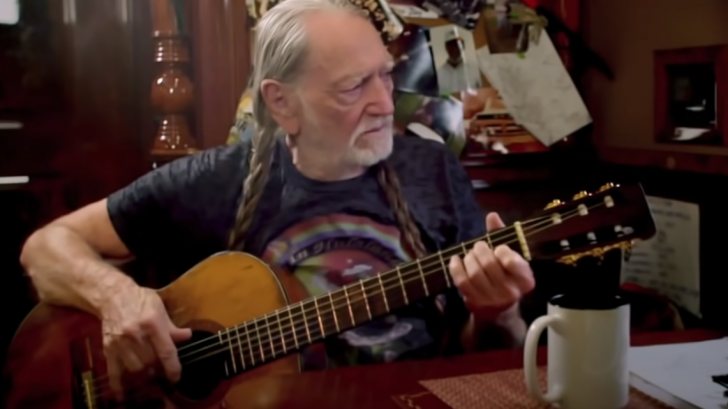 Willie Nelson is one of the most prominent musicians in the world, and not just in the world of country music. Nelson’s talents transcend genre and go far beyond music. Here are 10 Of The Most Insane Willie Nelson Career Stories you may not know about the legendary outlaw country singer.

He wrote his first song at the age of seven

While other children were still struggling to stay within the lines of their coloring books, Nelson was composing music. He recalled the experience of his debut as a composer for Rolling Stone in 2004:

“Back when we used to take music lessons from our grandmother, we’d go through lessons, and if we’d get the lesson right that day she’d take a gold star — a little star, about the size of your finger, with glue on one side — and she’d stick it on the sheet of music, which meant you’d done well.”

“So, I wrote this song with the line, ‘They took a gold star away from me when you left me for another, long ago,’” he explained, then added, “I’d never been left by anybody, so it was kind of funny.”

He used to be a Bible salesman

Before becoming a full-time musician in the mid-1950s, Nelson worked as a cotton picker (a job he began as a child, working alongside his grandmother), a disc jockey, and a bible salesman.

He ran into a burning house (to save his pot)

While living in Nashville, Nelson came home one night to find that his house was burning to the ground. ‘When I got in there, it was burning really good,’ he told People in 1980. “By the time I got there it was burning real good, but I had this pound of Colombian grass inside.” One hundred tapes of songs yet to be recorded were not as lucky as Nelson’s stash; they were lost in the fire. “I wasn’t being brave running in there to get my dope,” he said. “I was trying to keep the firemen from finding it and turning me over to the police.”

In 1972, Nelson paid $14,000 to buy out his contract so he could retire to Austin, Texas. But his withdrawal from the music business did not last long. Especially considering how vibrant the music scene was happening around her in Austin. Within a year, he was back on the charts with the album Shotgun Willie. In the mid-1970s, he scored some of his biggest hits with a trio of albums: Red-Haired Stranger, The Sound in Your Mind, and The Troublemaker.

He has been playing the same guitar for 50 years

Nelson has been playing Trigger, his beloved guitar (which he named after Roy Rogers’ horse), since 1969. ‘I have to take good care of Trigger,’ Nelson told Uncut Magazine in 2014.

He recorded “The IRS Tapes: Who’ll Buy My Memories?” to settle his tax debt

In 1990, the IRS raided Nelson’s home and seized his assets (everything except Trigger) for non-payment of taxes. The $32 million bill, one of the largest in IRS history, was finally negotiated and settled in a creative way: Nelson would record a new album and the IRS would receive at least 15 cents of every dollar earned. The result was the limited edition The IRS Tapes: Who’ll Buy My Memories?, which sold for $19.95 on cassette or CD and was purchased by dialing 1-800-IRS-TAPE.

Wrote ‘On the Road Again’ on a vomit bag

Nelson’s 1980 hit ‘On The Road Again’ was written onboard a plane, in a sick bag. As published in a Q&A published in the UK music publication Uncut, a fan named Natalie Amber of Luton, England asked, “Is it true you wrote down ‘On The Road Again’ on an airline sick bag?” Nelson reportedly replied, “Yeah. I was on an aeroplane [sic] with [producer] Sydney Pollack and Jerry Schatzberg, who was the director of the movie Honeysuckle Rose. They were looking for songs for the movie and they started asking me if I had any idea. I said, ‘I don’t know, what do you want the song to say?’ I think Sydney said, ‘Can it be something about being on the road?’ It just started to click in my head. I said, “You mean like, ‘On the road again, I can’t wait to get on the road again’?” They said, ‘That’s great. What’s the melody?’ I said, ‘I don’t know yet.'”

Former President Jimmy Carter has never hidden his admiration for Willie Nelson. And the two have shared a long friendship. On September 13, 1980, Nelson performed for Carter and guests at the White House, which included a duet of Ray Wylie Hubbard’s ‘Up Against the Wall, Redneck Mother’ with then First Lady Rosalynn Carter. (On several occasions, Nelson has recounted how he then went to the roof of the White House and smoked a joint.) In 2012, the former president got his own chance to share the stage with the legendary musician when the two performed.” Amazing Grace” together in Atlanta.

His album Stardust spent years on the country music charts

Nelson has made little secret of regular marijuana use or his support for its legalization. (His history of marijuana-related arrests certainly backs up those claims.) As more and more states are legalizing the once-banned marijuana, Nelson has put his expertise on the subject to good use and launched his own brand of marijuana: Willie’s Reserve.