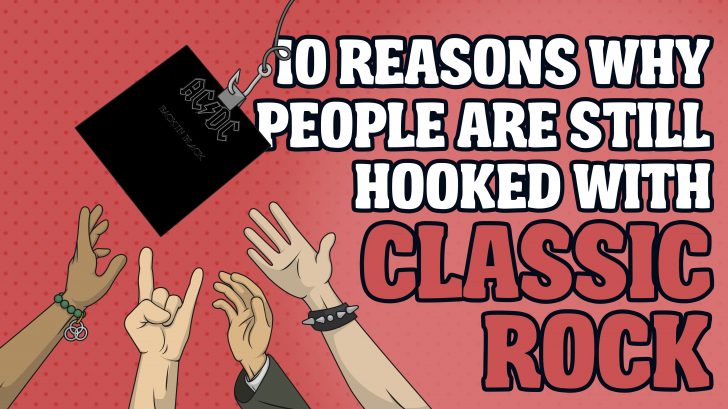 Classic Rock Will Always Be Better

Classic rock is the most authentic type of music, voices are absolutely pure. They had to have real talent to reach the top and become famous. We are all about classic rock, we don’t listen to it just because we want to be edgy or seem like a freaking badass (that’s what pousers do). We loved classic rock for the sake of nostalgia, and as we have thought about it, we’ve now more hooked up to classic rock because of these deeper reasons;

You don’t see most Pop artists today handle the instruments. They mostly hire session musicians or used a lot of tech thingy. Most of their music is completely digital.  They are more likely entertainers than artists. They are some sort of fast food or something that they were made quickly solely for convenience.

But Classic Rock, you will hear the actual instruments being played by actual musicians. That’s what you call real talent and it truly what music is all about.

9. Song Is Written By The Actual Artist

Something that lacks in today’s “ARTISTS.” Artists today don’t write their own materials this is an objective fact.  Some may have written their own stuff, but their lyrics aren’t strong or as well as written as the old stuff. I don’t even think that any of today’s so-called artists can come up with a “Bohemian Rhapsody” or a “Stairway To Heaven,” not even “Hey Jude.”

On the other hand, most of the greatest classic rock artists wrote some of the greatest songs of all time, and each band members had their own inputs. They actually write their music, play it themselves, and actually be great at both. One of those very reasons why we are still hooked up with classic rock.

Autotune is now very often in today’s music scene. It has become their very own instrument. They cheat their way to success. For kids who don’t even know what autotune is, they might falsely idolize pop singers today because they thought they are really belting the high notes easily. The fact is today’s singers just aren’t as talented.

However, in classic rock, there’s no autotune, nothing programmed, sampled or computer generated and all that shits. That’s their voice ONE HUNDRED PERCENT. That’s what we love about them.

I’ll make this one brief, short, and factual.

Led Zeppelin, The Beatles, AC/DC, The Rolling Stones, The Who, Guns N’ Roses, Van Halen, Jimi Hendrix, Eric Clapton, Rush, The Doors, Fleetwood Mac, Janis Joplin, The Eagles, Pink Floyd, Tom Petty, Moody Blues, Aerosmith, Lynyrd Skynyrd, The Kinks, Boston, Grateful Dead, so and so forth, should I go on? These bands that I’ve mentioned are LEGENDS! Today’s kids are not really blessed to have anyone that iconic to look up in the music industry today.

Today’s music is all about the image and money. – That’s something they only cared about.

But musician back then, our very own classic rock artists, that’s something they could give two shits about. That’s what makes them real. They do what they do best, and that’s playing real music. They love music more than themselves, and that’s why we cannot let them go.

Popstars just basically go on stage and do their things. It’s nothing out of the ordinary. They just show up, booty dancing, and “sing.” So simple and easy, it’s nothing to get excited about.

While our Rock Stars, man, they really have to perform and enslave themselves to the grind all night on every tour! They have no sleep and have no privacy. Risking everything, even their health just to give us the most amazing rock show!

The very differences between today’s music and classic rock are the appearances. Every single artist today only does things for appearances, feeling cool and stuff. They even have to choreograph every performance just to look good.

But Rock musicians never really had to deal with this kind of stuff. Everything they do is for music. It was all about the music. This is completely different in today’s scene.

Rock musicians live performances is just a good as they sound in their studio recordings. They make our every penny worth.

Seeing them performed live is not something we have regretted. If going to their shows and say “WOAH” they sounded even better than it did on the album records. These are real musicians! Yeah, you just saw real musicians, not pop turds.

You all can agree with this one, most of the legendary rock bands had actual art for their album covers. You don’t see some overdressed guy or girl on the cover for no freaking reason other than their annoying images.

1. It May be Classic But It Never Gets Old

We are still very hooked up with the classic rock music because it never really gets old. You may say that some song we hear on the radio over and over again may at some point get old, and so every pop star. Not even a single song in their name can last a year.

So classic rock, it may be classic but it will never ever gets old. Rock N’ Roll music will never die. If you’re at your 50’s or 60’s and still listen to your favorite rock bands, you can proudly say that you’ve made it! Pass the legacy to your children, and let Classic Rock keep ROCKING!