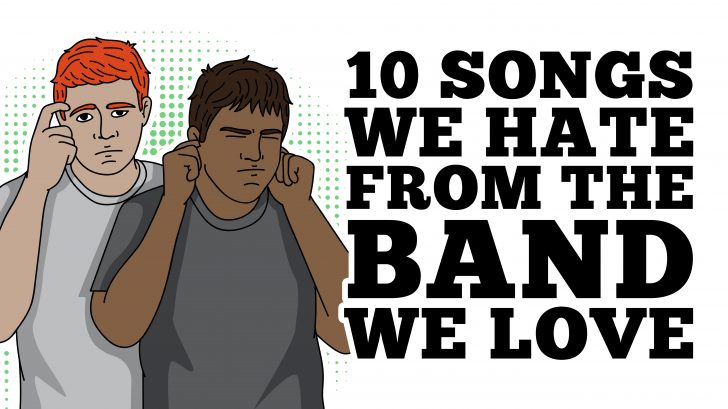 Just Songs We Don’t Want To Hear Ever Again

You know, even the greatest rock bands make mistakes. Sometimes, they go into the studio and it’s just not their finest musical moment. We may treat them as gods but at the core, they’re humans too and their creativity fizzles out over time. There are few bands that managed to release one great song after another but they’re pretty rare. Man, even The Beatles had their “meh” moments.

Maybe it’s partly our fault for expecting way too much. We put them on a pedestal and we want them to churn out materials which should not be less than stellar. We totally understand the feeling of hating songs from our favorite rock acts – it feels like a betrayal. And of course, there’s the grieving process:

Denial – “There’s probably something I’m missing.”
Anger – “Why doesn’t it sound half as good as the others? How could they do this?!”
Bargaining – “Maybe if I listen to it one more time, I might like it.”
Depression – *eating a whole tub of ice cream*
Acceptance – “Yeah they have their bad days, so what?”

We repeated the whole process for every number on this list, by the way. There’s no shame in that.

This is probably what goes on inside Axl Rose’s head when he’s having one of his infamous temper tantrums. You know what, the first time we heard this song, we weren’t sure if someone pulled a prank on us or if somehow, Guns ‘n Roses released it by accident.

We’re so confused and we were left with so many questions – did Axl write this drunk or high? Was this his middle finger to all the haters who still end up listening to their songs? Did an alien take over his body to pretend to be him so they can send this out-of-this-world message to all rock fans?

“I’d been listening to a lot of industrial music and all of a sudden I said, ‘Hey man, let’s do something. Let’s see what happens. Let’s just make it short and sweet and see what we come up with.” – Axl Rose

Axl claims there were mushrooms in the studio when they recorded this. That’s a pretty acceptable excuse.

Sometimes we forget this song is from Queen. The band just had so many epic tracks, it’s hard to believe they’d churn out something that doesn’t sound as majestic as “Bohemian Rhapsody” or intense like “We Are The Champions.” Even their underrated works were magical.

It was written by Roger Taylor and while it broke the top 10 in Canada and Poland, “Calling All Girls” only peaked at #60 in the US.

“But the Beatlesque “Life Is Real (Song for Lennon)” is a sweet, if a bit too literal, tribute and with “Calling All Girls” Queen finally gets synth-driven new wave rock right, resulting in a sharp piece of pop.” – AllMusic’s Stephen Thomas Erlewine

To be fair, their album “Hot Space” isn’t exactly everyone’s cup of tea. And it’s more of an acquired taste even among their fans. Still, it featured “Under Pressure” which is the only reason we bothered we that record.

This song isn’t THAT bad especially if it didn’t come from from Aerosmith. You see, we expected more from them. After all, we already got a taste of their greatness. Case in point: “Dream On,” “Walk this Way” and “Sweet Emotion” which remain staples in classic rock radio stations. These are epic tracks, people. So basically, it’s human nature to want something better after hearing such masterpieces.

If this was an upcoming band’s song, we would’ve liked it. But as we said, at this time, we’ve already put Aerosmith on a pedestal so anything mediocre is unforgivable.

The album itself wasn’t that impressive but on the upside, it promised better days because after years of going their separate ways, Aerosmith and of course, The Toxic Twins were back together.

It’s one of their heaviest songs and it’s also the worst. People are divided when it comes to this track – which is from the highly disappointing “Halfway to Sanity” album. Still, no matter how many times we put it on repeat, it just doesn’t click and all the musical elements don’t work. We do appreciate the band taking risks and experimenting – venturing into uncharted waters.

A for effort, sure, but other than that this is just crap.

“It kills me to say this, but with Richie or whoever on the lam, Dee Dee moonlighting as a punk-rapper, Joey frequenting all-acoustic showcases, and Johnny Johnny, a great band has finally worn down into a day job for night people.” – Music critic Robert Christgau

There’s not much here – nothing memorable or remarkable. It’s not something we thought we’d ever hear from them. It sounds clumsy and it lacks direction. Heavy, okay, but weak nonetheless.

This reminds of you of bar fight scenes in movies, doesn’t it? Anyway, it breaks our heart to include one of the greatest rock acts to ever walk the earth on this list. We associate Led Zeppelin with only the best – as a band and as individual musicians. So we’re kinda bummed to actually find a song we totally hate from their catalogue.

It’s a country song and maybe we’ve just gotten used to their hard rock music which makes us dislike “Hot Dog.” Man, that title alone is pretty embarrassing. It’s fun but that’s all there is to it.

“In Through The Out Door wasn’t the greatest thing in the world, but at least we were trying to vary what we were doing, for our own integrity’s sake. Of all the [Led Zeppelin] records, it’s interesting but a bit sanitised because we hadn’t been in the clamour and chaos for a long time.” – Robert Plant

Yup, “Hot Dog” was from the album “In Through The Out Door” which is clearly not one of their best works.

At first we were like, “Is this intro?” Then we were like, “Oh that’s the whole song.” Yes, we know you can hear our collective disappointment all the way from there. It’s weird and creepy, to say the least. It doesn’t sound anything like Pearl Jam.

If you find the title confusing, wait until you actually listen to the track. We’re making fun of it now but when you play this in the middle of the night, it won’t be so funny anymore. It just gives you the creeps. And when you find out those people talking are mental hospital patients, that would take the whole creep factor to another level.

“I had taped something off the TV when I was maybe 17 or something and I think it was people who had mental problems who were being let out of the hospitals early because the states were taking away funding for mental hospitals. So they were setting these folks out without the necessary care but it was still very intriguing the way their mind worked and what they would say and we experimented and tried to incorporate it into what to date is our most emotional and moving song.” – Eddie Vedder

For the record, we have no idea if Eddie Vedder is joking or not. The song’s also called “Stupid Mop” and you can hear one of the schizophrenic patients rant about it.

Some argue that “St. Anger” is getting way more bashing than it actually deserves. Oh, really? Okay, let’s say it’s not the worst there is, but it’s an absolute snooze fest. The album has a few gems but the title track is surely not one of them.

This is like nails on a chalkboard – grating on your nerves and incredibly irritating. Those who think it’s underrated need to go have their hearing checked out. There’s nothing special about it and Lars Ulrich sounded like he was randomly banging on pots and pans.

“I mean, we thought “St. Anger” was going to be amazing, but it turned out to be more of a statement than METALLICA music that we enjoy playing live. It was more of a purge, just getting that shit out of me, as a catalyst for the next chapter of METALLICA.” – James Hetfield

It’s an atrocity. At one point, we were convinced some aliens took over the bodies and tried to convince us they’re Metallica. But we’re not buying.

Does this sound different and a bit weird? Like there’s something wrong but you can’t put your finger on it? Well it should baffle you, considering this is from the Ian Gillan lineup. It makes you wonder though, a powerhouse team that includes legends like Ian Gillan and Tony Iommi should produce something epic. Right?

Sadly, that wasn’t the case here. It’s not awful but only mediocre at best.

“I think one of the most outrageous [videos] we’ve done was the one with Ian Gillan, was for ‘Trashed.’ Of course, it got banned because it was too lewd.” – Tony Iommi

This was also included in the “Filthy Fifteen” list of the Parents Music Resource Center (PMRC) because according to them, it was glorifying alcohol and drug abuse. You see, we love Deep Purple and Black Sabbath but this song isn’t the ‘collaboration’ we expected from the rock giants Gillan and Iommi.

It’s decent, yes, but certainly not the best. It’s not just “Did You Steal My Money,” because the whole “Face Dances” album isn’t exactly the product of a band at their creative peak. But you know what, it happens. Musicians struggle all the time and you cannot expect even the legendary ones to churn out one excellent hit after another. They’re not miracle workers.

That being said, we hate this song.

“”Did You Steal My Money” (which sounds like a sequel to Empty Glass’ “And I Moved”) seems meant to work as a metaphor – and an interesting one. But it’s so clunkily literal and reticent (with studio fripperies substituting for interpretation) that you can’t figure out what it’s a metaphor for.” – Tom Carson for The Rolling Stone Magazine

It was a tough time for the band because they lost Keith Moon three years before the release of “Face Dances.” And Kenney Jones had big shoes to fill – an impossible task, if we’re honest.

“Revolution 9” scares the bejesus out of us. This “sound collage” is just strange and creepy – talking about it already gives us goosebumps.

The White Album is hands-down brilliant and there aren’t enough superlatives in the dictionary to describe its greatness. It’s like a cup of hot chocolate on a chilly morning. When you play it, it feels like you’re in a safe place. Well that is, until you get to “Revolution 9.”

“Revolution 9 was an unconscious picture of what I actually think will happen when it happens; just like a drawing of a revolution. All the thing was made with loops. I had about 30 loops going, fed them onto one basic track.” – John Lennon

It’s chaotic and messy. It’s the stuff you hear in horror movies when you know something pee-in-your-pants scary will pop up somewhere. It didn’t ruin the whole album, thank god, but we’re more than fine not hearing about it ever again.