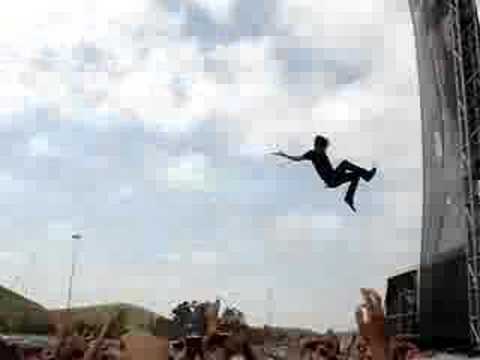 Stage dive has been going for decades and has become an essential part of a great rock and roll show. Below are the 10 Stage Dives That Got People Nervous:

The classic Vedder stunt was captured in 1992 at the Pinkpop festival in Holland. Eddie Vedder out of nowhere decided to climb the rotating TV mast and just from it into the crowd.

Matt Schultz of Cage The Elephant frontman jumps off giant speakers at the Vic Theater show in Chicago. A 20-foot stunt that can be done if you’re crazy enough.

The most remembered stage dive of Iggy Pop where no one in the audience caught him that led Pop to decide that he will no longer do stage dive because of the injuries he obtain during the show.

Sid Wilson is famously known for his death-defying stunts into the pit. The Slipknot DJ famously decided to do a balcony jump into a sea of maggots at the 2008 Mayhem Festival.

After finishing a set at the Jones Beach, N.Y. show, the frontman decided to do a stage dive from the stage to water – swans weren’t impressed by his stunt.

In the video below captured in Sydney, Australia, vocalist Beau Bokan definitely embodied their band’s name, Blessthefall, he Taking the fall! A smart idea?

During his eight-year span with Scary Kids Scaring Kids, keyboardist Pouyan Afkary didn’t just play the keyboard but he did his part doing crazy stuff, taking it to the pit.

At the 2008 Bamboozle Left Festival, Escape the Fate vocalist Craig Mabbit took a big backward leap of faith into the audience from at least 20-feet in the air.

This happened at the peak of Limp Bizkit’s career as the band’s frontman decided to do a huge backward jump from the top of the Hammerstein Ballroom stage.

There is no stage-dive in history that can beat this memorable stunt from Boy Hits Car frontman Craig Rondell. During the bridge of ‘Benkei,’ the frontman reportedly fall 68-feet after soaring onto a mass of speakers at K-Rockathon 10 in Weedsport.