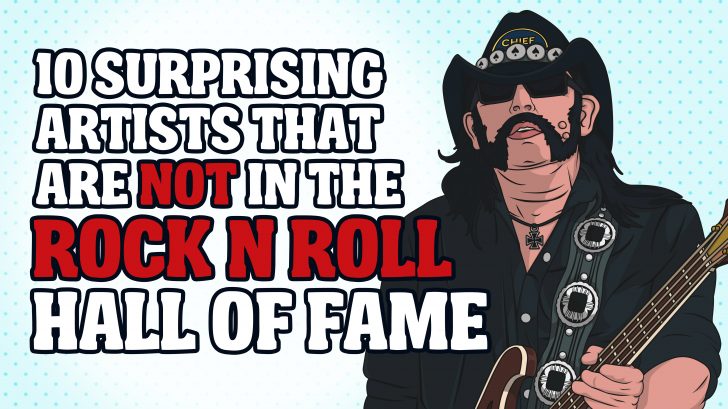 The Worst Snubs In History Of Snubbing

Music will always be the universal language. It brings people together despite the differences, either you are Black, White, Asian, or even Canadian. We take music and our favorite artists seriously. To the extent that we somehow worship them (not in a religious way though). We cling to music for pleasure or struggles in life. It stirs up our deep emotions and even the hidden ones. Music simply has its different aspect towards different people. The artists listed here deserve more. Some of these became our personal heroes or our influences in that matter. We have so many to choose. Yes, there are a lot of bands or artists that deserves this kind of credibility also. We’ve chosen these artists because they have been ignored for the past years… Are we wrong or are we right? Who are your picks? What are your opinions? Until then, here are the 10 surprising artists that are not (yet) inducted as the Rock and Roll Hall of Famers….

An English rock band formed in 1975 by bassist, vocalist and songwriter Ian Fraser “Lemmy” Kilmister. So many have sought for Motor to be inducted in Rock n Roll Hall of Fame. They deserve it, they change the pace of rock and roll.

Sadly, Ian Fraser “Lemmy” Kilmister left us without even being honored as a legendary musician. But in our hearts, as a Motorhead fan, he is surely a Hall of Famer. They belong in Rock and Roll Hall of Fame no matter what the critics says.

It’s really important for music to acknowledge them as such. There’s no way to describe of how rock n roll Lemmy is…

A thrash metal band formed in 1981 by Kerry King and Jeff Hanneman. As a band being included as one of the big four in Heavy Metal, along with Metallica, Megadeth and Anthrax, there is no doubt that they deserve the acknowledgement as being Hall of Famers.

It’s a sure thing that at some point Slayer were never really a mainstream for most people. But for Metalheads, they have the most favorite for years…

It is still a big question why such a band like this one has always been left out for Rock and Roll Hall of Fame. That is very depressing for their fans.

Another heavy metal band formed in London, in 1975 by bassist Steve Harris who is also their primary songwriter. One of the biggest reason why we have to boycott Rock & Roll Hall of Fame. I smell politics in it.

Well, I guess Iron Maiden wouldn’t even care at all. But for us fans? RnRHOF is a TOTAL BS and it is being run by people who doesn’t know a thing what Rock n Roll means.

Iron Maiden surely are eligible to be included than being snub.

Heavy Metal band formed in England, in 1969. Definitely one of the greatest heavy metal band of all time. They deserve more than being a top 5 in your stupid list! Rock and Roll hall of fame has surely become a joke! Including pop and hip hop acts! They are mad! They should be ashamed by not inducting them as Rock n Roll Hall of fames!

How do you even justify that? Saying its “Rock n Roll” then suddenly we see different acts! It should be relevant to rock in the first place! Now, you have chosen hip hops over a Legend! The hell is wrong with you people!

Formed in Settle, in 1984 by singer and rhythm guitarist Chris Cornell (rest in peace). It seems insane not including Sound Garden in the RnRHoF. They have included Pearl Jam so why not Soundgarden?

Chris Cornell have written a lot of good stuffs for Soundgarden and he certainly has the most incredible and beautiful voice in the history of rock! Just because someone has a bigger name doesn’t mean they are any better. Pearl Jam is a great band, but why is it that they are inducted first?

I don’t know anymore, everything is a joke.

A rock band formed in West Sussex in 1976. It is definitely a travesty not including them in RnRHoF. Seems like you have to have the popularity of a sold oud staple singer to be in. If you look closely at their entire career, they are definitely deserving.

They have been definitely overlooked. The Cure is one of the most influential post-punk band. The band surely deserved to be inducted. So it leaves us a question whether they will ever receive that kind of honor.  They provided the blueprint for the generation of gothic bands I.E. The Smashing Pumpkins.

The industrial Rock Band founded in 1988 by Trent Reznor. Nine Inch Nails has become a huge impact on bringing industrial rock to the mainstream. It is a surprising thing not seeing them being inducted in RnRHoF.

It seems like they have been snubbed or robbed of the honor for several times… They deserve to be in there especially Trent Reznor! It’s a no brainer to include them. They will be inducted! Just got to have faith. The only question is when?

“The Smiths were an English rock band formed in Manchester in 1982. The band consisted of vocalist Morrissey, guitarist Johnny Marr, bassist Andy Rourke and drummer Mike Joyce.” One of the most important bands to emerge in the music scene.

The Smiths is really one of those big acts that have been incredibly influential for decades. They are definitely more deserving than the others. It always been a mystery why this band has never been inducted. Well, I guess excluding them just feeds their legend.

A rock band formed in Blackpool, Lancashire in 1967. They are one of the most underrated band and actually deserves to be in the Rock And Roll Hall Of Fame. Have they ever wondered that no one and nobody rocks the flute like Ian Anderson! They are very diversive musicians.

Jethro Tull surely meets all the possible criteria for the admission as Rock And Roll Hall of Famers!

“Dire Straits were a British rock band that formed in Deptford, London, in 1977 by Mark Knopfler his younger brother David Knopfler John Illsley and Pick Withers (drums and percussion).” They have become eligible for inclusion in the Hall for a very long time. Direstrait is one of the only noteworthy entry. And it is really saddening that the Rock and Roll Hall Of Fame has always inducted non rock acts.

It seems like RnR is not for rock music anymore. We all love to see Direstrait in the Rock Hall. As deserving as Jethro Tull, Direstrait should also be inducted!

So who are your picks? Share us your thoughts..