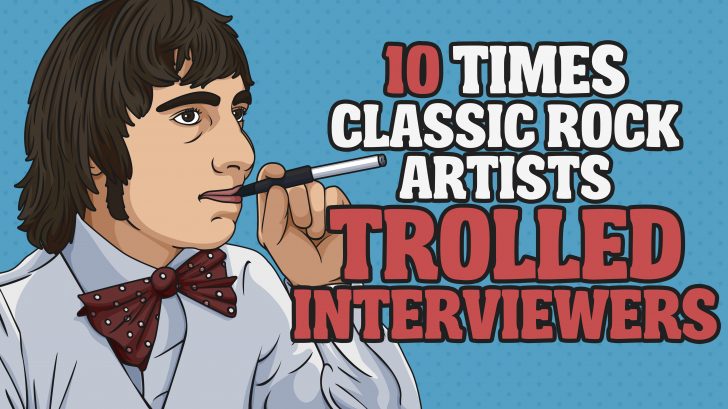 Ranging From Awkward To Funny

Rockstars are notorious for being unpredictable and they’re not exactly huge fans of interviews. And let’s admit it, some interviewers are on the boring and annoying side. So you can’t really blame these guys for having a good time while they’re at it.

They liked to troll even before trolling was a thing. And it made the interviews awkward, cringe-worthy or downright hilarious – you decide.

Only Green Day would dare to mention “boner” on live TV. And the interviewer was trying his best to divert the topic to “Disneyland.”

The longer it goes, the more unbearable it is to watch. Lydon’s dropping sarcastic remarks and looking like he’d rather be anywhere else but on that show.

We dare you not to laugh when one of them says, “We’re not using any more makeup than anyone else here.”

Zakk talking about viagra repeatedly and you can see the female reporter starting to get uncomfortable.

Courtney Love trolling both the interviewer and Madonna is equal parts cringy and hilarious.

The “loomer” or “lurker” won this interview.

“And I’m usually the best dressed.” Yep, he went there.

From the face he makes at the beginning to the way he talks, we’re not so sure if he’s trolling or high or both.

There’s no actual footage for this but one time, Keith Moon was running late for an interview because he was busy drinking at a pub. Being the greatest rockstar troll ever, he asked his chauffeur to buy all the gauze bandages he can find in the nearest drug store. He then told his assistants to wrap him with bandages from head-to-toe. He always had a flair for drama so he “arrived” with a crutch and apologized to the interviewers claiming he came from the hospital after being run over by a bus.

The press was horrified and were ready to cancel the interview but Moon insisted that they continue. In the middle of asking questions, Moon took off the bandages, stood on a table and did a tap dance. No, we’re not even kidding.