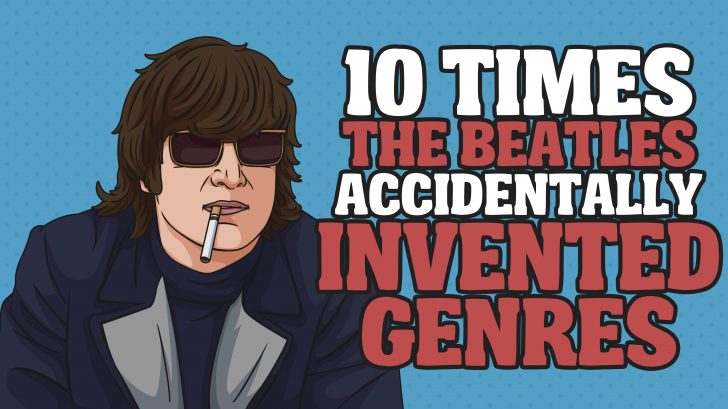 There’s no denying that the Beatles are the most influential and if you think that they are overrated then you’re just dumb and trying to sound cool. They did many things; they turned albums into art forms, the first time rock music ever used was in a Beatles song. They eve revolutionized the recording process. SO, HOW CAN YOU NOT LIKE THE BEATLES?????

I get it if you don’t like the Beatles then you never have to but don’t you ever dismiss their influence, they are THE MOST INFLUENTIAL BAND IN THE HISTORY OF MUSIC – The Most Creative, and Versatile band of all time.

The Beatles never intended to invent these genres, but it happened anyway because they were so creative, genius, and very experimental.

The first hard rocking song, it makes you groove, twist, and of course shout!

Did you hear the opening chord? Well, that’s it there accidentally invented this genre: PURE GENIUS RIGHT THERE!

Folk Rock – I’ll Be Back

One of their best early songs and the chord patterns they were just coming out of nowhere and we still have no clue where they came from. An unprecedented piece of work that created Folk Rock.

Power Pop – She Loves You

Yeah, it’s a pop song but the music is very powerful because it’s the Beatles!

The album cover even says it all, and this is definitely the first electronically advance music in history.

I don’t even have to elaborate this for you, just roll up a blunt and there it goes. And imagine this the Beatles were so stoned that they allowed Ringo to sing a song (no pun intended much respect for Ringo).

It’s mesmerizing, beautiful, and haunting all at the same time – so PROG.

Acid Rock – Lucy In The Sky With Diamonds

Picture yourself on a boat in a river while doing an Acid and listening to this song all at the same time, what do you get? – Acid Rock!

Doom – I Want You

The Basslines are insane, the guitar works are genius, the vocals are extremely gracious, and the drumbeats, SIMPLE BUT HEAVY! Man! Beatles had done it all!