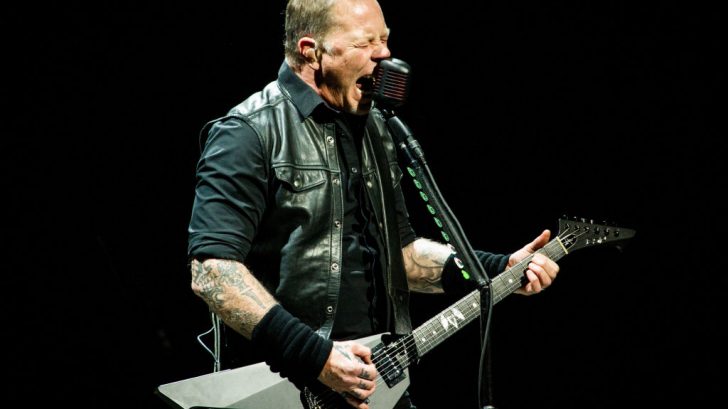 As a rock hero from one of the biggest thrash metal bands of all time — Metallica — James Hetfield has established a harsh and gruff character for the stage that matches the fury of the music. What was possibly much more difficult and bold was when the renowned vocalist admitted to both fans and the general public that he, too, was a fragile human being like everyone else.

Below are the 12 Tragic Stories That Shaped James Hetfield

THE CHRISTIAN SCIENCE BELIEFS OF HIS FAMILY MADE HIM AN OUTSIDER

James Hetfield has stated on several occasions that his parents’ strong Christian Science beliefs caused him to feel like an outsider at school because of their rigorous conviction that spiritual force, not contemporary medicine, heals people (via “Justice for All: The Truth about Metallica”). Growing up in the early 1970s, resulted in a number of unpleasant circumstances that made him the target of mockery from his peers.

VIRGIL AND CYNTHIA HETFIELD’S DIVORCE WAS DIFFICULT FOR THEIR SON

In addition to the seclusion he experienced at school, James Hetfield’s family life was chaotic. When he was 13 years old, his folks, Virgil and Cynthia, divorced (via “Justice for All”). As though the entire scenario wasn’t upsetting already, James was kept in the dark about the split and was caught off guard. As that was all unfolding, he grew enraged by his father’s conduct.

Rather more devastating than his parents’ separation, James Hetfield’s mother died from cancer barely three years after the divorce. In the book “Justice for All,” his bandmate Ron McGovney recounted that dreadful moment and detailed how Hetfield had to go stay with his brother later, moving to a different school.

When discussing the horrific tragedy that occurred in 1993 (via “Justice for All”), the frontman stated, “I saw the bus lying right on him. I saw his legs sticking out. I freaked. The bus driver, I recall, was trying to yank the blanket out from under him to use for other people. I just went, ‘Don’t f****** do that!’ I already wanted to kill the guy. I don’t know if he was drunk or if he hit some ice. All I knew was, he was driving, and Cliff wasn’t alive anymore.”

Metallica came perilously close to losing a second member while onstage in 1992, after previously recently lost one. James Hetfield walked at the incorrect spot on stage at Montreal’s Olympic Stadium when a massive pyrotechnic burst burnt a major portion of his skin.

James Hetfield’s father, Virgil, died of cancer in early 1996, exactly like his mom. His father’s death was certainly heartbreaking since he had begun to spend longer with him. Even though James had been upset at his father for years about his childhood and his mother’s death, visiting Virgil more frequently was easing his feelings.

INJURIES FROM SKATEBOARDING FORCED HIM TO STOP

During his early career, James Hetfield was frequently seen playing around on his skateboard in between gigs. When questioned why he started skating as a passion, the singer answered Thrasher Magazine, “Wanted something to do on tour, because there was a lot of idle time when we’re not doing anything. And I don’t drink as much as I used to, so it mellows me.”

Hetfield would keep stumbling and admitting to twisting his ankle a few times, but it didn’t appear to affect him. This became a concern before a gig in July 1986, unfortunately, when he slipped and injured his wrist, forcing Metallica to postpone the show.

ALCOHOL ADDICTION HAS BEEN EXPERIENCED BY JAMES HETFIELD

It’s terrible that James Hetfield had to skateboard much less because it was a method for him to cope with his drinking. He stated that if he was skateboarding, he was not drinking. Hetfield used alcohol as an excuse for his difficulties for most of his life, from the painful moments he had in high school through the demise of Cliff Burton.

James Hetfield has proceeded to injure himself, most significantly with a back injury in 2000, in addition to being set on fire and suffering different skating injuries. He worsened his persistent back problem while jet-skilling and was required to heal from a herniated disc. According to MTV News, the vocalist was forced to skip certain performances as a consequence, but numerous other rock musicians, including players of System of a Down and Korn, as well as Kid Rock, stood in for him.

TENSIONS WITH BANDMATES HAVE BEEN HIGH DUE TO ANGER MANAGEMENT ISSUES

Fans were given a highly personal peek into what it was like to be a band member when the film “Metallica: Some Kind of Monster” was launched in 2004. One aspect that became clear was that James Hetfield has not always been pleasant to be around due to his unpleasant demeanor at times, given the high degree of stress between the vocalist and drummer Lars Ulrich. Hetfield was blatantly honest in a discussion with the New York Daily News, saying, “I was a rage-aholic. I would build up resentment, then explode.” The singer then added that after his spell in rehab, he only became more difficult to be around. “I had been very passive-aggressive,” he said. “I became aggressive.”

Even after years of triumph and the substantial number he has accomplished with Metallica, insecurity has returned to plague Hetfield due to his advanced age, as shown at a recent show in Brazil. While on stage, the frontman admitted to the audience, “I’ve gotta tell you I wasn’t feeling very good before I came out here. [I was] feeling a little bit insecure, like I’m an old guy, [I] can’t play anymore — all this bulls*** that I tell myself in my head.” But his bandmates helped him through the anxiety, and once again, they all hugged him in front of the cheering crowd.

ENNIO MORRICONE AND MARSHA ZAZULA PASSING WERE MOURNED BY METALLICA

Metallica, and particularly James Hetfield, have suffered the death of two more close friends in recent years. Not only did Ennio Morricone influence the legendary track “The Unforgiven,” but he had also built deep relationships with Hetfield and the rest of the group, thus his death in 2020 was difficult for the vocalist. The vocalist stated in an Instagram post using Metallica’s account, “The day we first played ‘The Ecstasy of Gold’ as our new intro in 1983 it was magic! It has become apart of our blood flow, deep breathing, fist bumping, prayers, and band huddle pre-show ritual ever since. I have sang that melody thousands of times to warm up my throat before hitting the stage. Thank you Ennio for pumping us up, being a big part of our inspiration, and a bonding between band, crew, and fan. I will forever think of you as part of the Metallica family.”

The death of Marsha Zazula in 2021 was particularly heartbreaking for Hetfield because of the importance she had played for the band throughout the years. The frontman issued a statement following her death: (via Metal Injection), “Marsha Z is the Metal Matriarch of the East Coast. She was our mother when I had none. She made great sacrifices for METALLICA to grow. Thank you, Marsha. Love and positive energy to the Zazula family.”