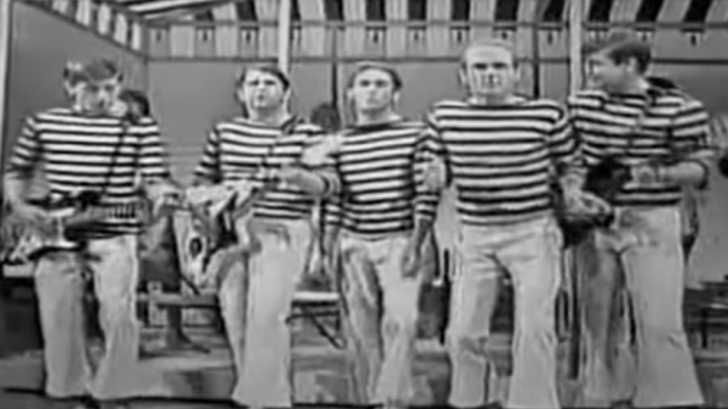 Brian Wilson is the official genius of pop music, his story has it all, successes, depression, drugs, madness… But if Brian Wilson had led a normal and gray life, and we were left without stories to tell, but still Had he made these songs, he would have to continue to be called a genius, one of the few that popular music can claim. Leading the Beach Boys, Wilson wrote, arranged, and produced some of the greatest songs in history. Here are the 15 Beach Boys Songs That Made Them Legends:

If this was the only song written and recorded by Brian Wilson, we would still be talking about him as a genius today. It is incredible that three minutes and thirty-five seconds give so much, a mini symphony, in which so many things happen, in every second, that it seems like a dream. The incredible thing is that this song was composed as he was recording it, adding and removing things in the studio for three months in four different studios, it was normal for his colleagues to have a hard time being able to reproducing its multiple sounds, including the incredible Theremin, in straight. And it is that by this time Wilson was so focused on work in the studio that he had abandoned the tours. The result could not have been better, ‘Pet Sounds’, for many the best album in history, and ‘Good Vibrations’, for many others the best song in history.

1966 was a magical year for Wilson and the Beach Boys, Wilson was able to have time to create his particular masterpiece and focus in the studio to create ‘Pet Sounds’ alongside the best musicians in Los Angeles, Hal Blaine’s Wrecking Crew and Carol Kaye. After giving up touring, and getting his company to let him slow down (the Beach Boys had put out three albums a year from 1963 to 1965), Wilson was able to expand all the orchestral ideas he had begun to develop on the B-side of ‘Today. ‘ and give the world a perfect album like Pet Sounds. Well, within that perfect album there is a song that stands out, a song that can rival ‘Good Vibrations’ as the best of the band (and in history), it is ‘God Only Knows’, a sublime prayer that Brian gave to his brother Carl, possibly the best voice of the group, to make it history. It is the favorite song of Paul McCartney, the only man on the face of the Earth who can rival Wilson when it comes to making the most memorable melodies in history.

When Brian Wilson first heard the Ronettes’ ‘Be My Baby’ on the radio, he had to pull over to the side, turn up the volume and sit for several minutes thinking he had heard the most wonderful music of all time. . Phil Spector, the producer, became his idol and did not hesitate to assimilate many of his techniques until the disciple surpassed the master. But first, he decided to write the Ronettes a song, it was ‘Don’t Worry Baby’ but Spector decided to reject it, his loss was the gain of the Beach Boys who recorded it with Brian’s falsetto in the foreground. They used it as the B-side of ‘I Get Around’, with which it forms one of the best singles of all time. And the fact is that few songs can rival ‘Be My Baby’ but ‘Don’t Worry Baby’ is one of them. Many years later, Ronnie Spector, the lead singer of the Ronettes, indulged in singing a song that had been made with her voice in mind.

The opening track ‘Pet Sounds’ is proof that by 1966 Wilson had outgrown Spector’s Wall of Sound, one of the first times pop approached classical music without losing its essence. Carrying over Brian’s ideas, Tony Asher subverts the first rule of a pop song by opening by saying “wouldn’t it be nice if we were older”. I suppose that if there is such a thing as heaven, this is the music with which you should be received.

Among the many wonders he has composed, the one Brian Wilson himself is most proud of is the incredible introduction to this song, his first approach to classical instruments, with an air of Bach, until ending up with the quintessence of the Beach Boys of surfing, the beach and the girls. The lyrics are pretty stupid but what do you expect someone like Mike Love to write?

‘Smile’ was going to be the culmination of his career and ended up being his downfall. Some think Wilson realized he wasn’t going to be able to top ‘Pet Sounds’, or his bastard son ‘Sgt. Pepper’s, and decided to cut to the chase, but ‘Smile’ is a great album, as Wilson himself demonstrated with his 2004 solo version or the extensive box set of ‘The Smile Sessions’. An album that opens with ‘Hearoes and Villains’ and closes with ‘Good Vibrations’ can only be considered a marvel. Made up of sections like ‘Good Vibrations, it was held in very high regard by Wilson. He thought this was the song that was going to take away from them the car-and-surf-band label, but when it ultimately failed to make the success of ‘Good Vibrations’ something in Brian’s fragile ego snapped.

Brian Wilson was already a wonderful composer, long before he started making pop symphonies, just listen to the glorious ‘I Get Around’ to realize it. This was the band’s first number one and its recording marked the definitive dismissal of the Wilsons’ abusive father as the group’s manager.

The most mythical song of the discarded ‘Smile’. If ‘Heroes and Villains’ and other songs from that project ended up being released on other albums, mainly ‘Smiley Smile’, ‘Surf’s Up’ was left in a box with others. But Brian Wilson had played it at the piano on a TV show hosted by Leonard Bernstein and a lot of people had fallen in love. As Wilson drifted further and further away from the studio (and from reality) there was a lot of pressure to rescue her. Finally, in 1971, Wilson gave his arm to twist, although he resigned from the main voice, again for the benefit of his brother Carl, who at that time was the one who held the reins of the group. For the version that appeared on the album of the same title, many things from the ‘Smile’ recordings were used, although new voices were added. The result is a wonder that accompanies what is probably the best Beach Boys album in the 70s.

‘Help Me Rhonda’ is a perfect example of Wilson improving by leaps and bounds in the studio throughout 1965. The first version of the song to appear was on the splendid ‘The Beach Boys Today!’ satisfied with it, it was a great song, but Brian knew there was still more potential in the song. A month after their first recording Brian got the band back in the studio, with regulars like Hal Blaine and Carol Kaye, upping the tempo a bit and throwing in the fundamental “bow, bow, bow” choruses, by the time they finished Brian had of course he had just recorded the band’s second number one. That’s how it went.

The first Beach Boys song in which Brian appears as a producer, as well as a composer and arranger, is this wonder in which he returns to combine his angelic voices like no other, with Brian acting as a soloist, with Mike Love and his brothers Carl and Dennis on the choirs, showing again that his romantic side is what has given him his best songs.

Is there a song that conveys more summer and good vibes than “Surfin’ U.S.A.” by the Beach Boys? The Californians would prove that they were much more than a surf gang, but even when they put on their bathing suits, they proved to be something very special.

The Beach Boys’ dazzling simplicity was part of what made them such a massive commercial phenomenon in their early days. While The Beatles symbolized something a little riskier, The Beach Boys were the all-American clean-cut group who would trim your grass for a nice glass of lemonade. Songs like ‘In My Room’ helped establish them as the heroes of a new age.

Surf’s Up, released in 1972, may not go down in the history books as one of The Beach Boys’ finest records, but it did feature this utter gem. ‘Til I Die’ is one of the band’s signature songs.

‘I Just Wasn’t Made For These Times,’ released as part of Pet Sounds in 1966, is perhaps one of Wilson’s best and still most neglected compositions. It’s a song that cracked the fourth wall and broke Wilson’s concept of himself to the expectant audience.

That ear comes to the surface once again. It may not be the most sophisticated piece on offer, but it is a testament to Wilson’s musical knowledge that he is so excellent at constructing patterns that can be performed on the balconies of sporting venues all over the planet. While shouts are not considered great, the truth that Wilson’s song has surpassed itself and into a larger realm of culture is an accomplishment in and of itself.