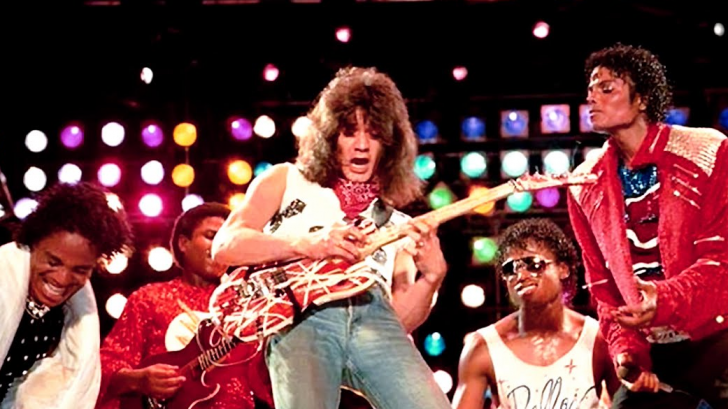 Electric guitars can be a commodity whose value reaches stratospheric figures. Like any other collector’s item, the year they were made, who played with them, their history or their unique character can turn them into real treasures. And there is always a millionaire interested in getting them: sometimes for charitable purposes, other times to recoup the investment when they revalue. Some others for pure collecting, and it is even possible that someone gets to touch them. In any case, these are pieces that keep inside the secrets of the past of music. Although many of us can’t afford them, it can be fun to do a little review of some of the guitars that have been paid really titanic amounts for. Below are the 15 Most Expensive Guitars In Existence:

It is not surprising that one of the guitars that make up this list is the a signed Kramer guitar of one of the guitars that changed history. This was once gifted to the musician’s friend Bryan Cush, brought in $231,250 at Julien’s Auctions two months after the death of EVH. Apparently, Eddie’s son, Wolfgang Van Halen, wasn’t pleased with the auction: “They weren’t stage guitars,” he clarified. “I had nothing to do with this. I don’t EVER plan on selling any of my father’s iconic guitars.”

Used atop London’s Apple Building by George Harrison to play in the movie “Let It Be”, this guitar also played a major role in the recording of the album “Abbey Road”.

As you will see throughout the list, everything that slow hand plays turns into gold, in this particular case, even more so. Commissioned in 1996 by the guitarist to celebrate 50 years of the Fender Company, this guitar is finished in 23 karat gold. A modest guitar, functional above all.

Jimi Hendrix burned two guitars in his history, even though the magnification of this fact made it seem like a much more prevalent custom than it actually was. The first of these was “sacrificed” at the Finsbury Astoria in London and auctioned in 2008. Although many media reported that it was sold for a lower price, the Fame Bureau auction house apparently reported that, with the fees, the amount rose to $560,000. This guitar spent almost 40 years in the garage of the parents of Tony Garland, Jimi Hendrix’s press officer, who took the guitar for a useless thing. Until one day, it was dusted off by Garland’s nephew. Can you imagine being that nephew?

Used by the Beatles between 1966 and 1969, and was used on the “White Album” and the “Revolver” tour. In addition, it was used in numerous video shoots and concerts in the United Kingdom, such as that of the NME.

Only 38 guitars belong to the original 1958 Explorer series. Considered a commercial failure, it underwent a resurgence in the 1970s, a time when the more radical forms were more widely accepted, at which time the guitar was reissued. The guitar we are talking about in particular was originally purchased in 1963 for about $300. However, it was auctioned with a price tag of more than $600,000.

A gift from Stevie Ray’s wife for her 26th birthday. After some adjustments and additional parts (such as a neck gifted by Billy Gibbons of ZZ Top), the guitar was part of many of SRV’s work to the date of his passing.

Clapton sold numerous guitars in order to raise funds to raise the Crossroads Rehabilitation Center. This acoustic guitar was one of them, and it was one of the main instruments of his appearance on “MTV Unplugged.”

Purchased in 1964, this guitar was used throughout Clapton’s career alongside the Yardbirds, Cream, Blind Faith, and John Mayall’s Bluesbreakers, as well as in his solo work.

This guitar was originally intended to replace Lennon’s 1964 Rickenbacker 325, which was damaged at the time. The only differences of this model with its 325 was the finish and the “f” shaped hole.

The leader of The Grateful Dead gave luthier Doug Irwin complete freedom to make a special guitar, which included numerous technical innovations such as a de-activatable effects loop, flexible electronics options, and DiMarzio pickups, making it Garcia’s lead guitar. for the next 11 years.

A classic of Clapton guitars, it tells the story that Eric bought 6 Strat guitars right after switching from Gibson to Fender. Some say he paid $ 100 for each, others $ 300 – be that as it may, it appears that he gave three of them to George Harrison, Pete Townshend, and Steve Winwood. With the remaining three, he chose pieces to build the famous “Blackie”. After years of close relationship with this guitar, it was auctioned to obtain funds to create its own rehabilitation center.

When Dylan took to the stage at the 1965 Newport Folk Festival it was the time of his transition to electric, causing some confusion among longtime fans. This guitar was the star of that somewhat hectic day, which meant that Dylan did not return to the festival until 2002.

Nothing more and nothing less than the runaway guitar. After being used at some important moments in The Beatles’ career, this guitar was lost by the band’s roadie, only to reappear four years later in a San Diego store. Purchased by an individual, oblivious to the identity of the guitar, it was identified again years later, and authenticated by the specialist in the Beatles team Andy Babiuk. The guitar was auctioned for the amount you can read, an amount that was shared with Lennon’s widow, Yoko Ono (who in turn donated it to The Spirit Foundation).

A guitar signed by none other than Eric Clapton, Mick Jagger, Keith Richards, Brian May, Jimmy Page, David Gilmour, Jeff Beck, Pete Townsend, Mark Knopfler, Ray Davis, Liam Gallagher , Ronnie Wood, Tony Iommi, Angus & Malcolm Young, Paul McCartney, Sting, Ritchie Blackmore, Def Leppard, and Bryan Adams. A good collection of reasons for this guitar to be auctioned – at the initiative of Bryan Adams – and raised $ 2.7 million for charity. Everything that was obtained was destined to help the victims of the Tsunami in the Maldives.