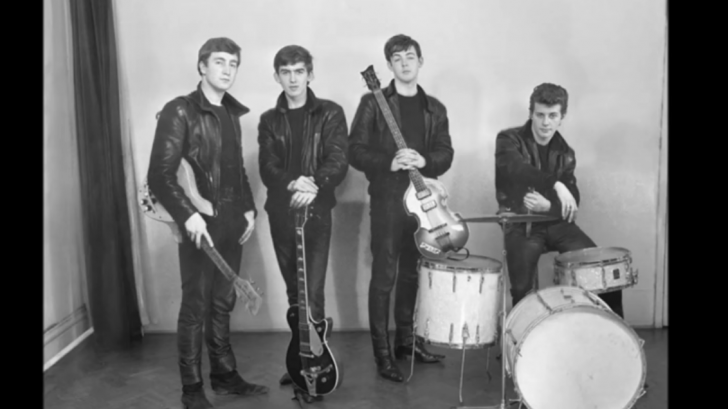 Overcoming the barrier of time and space may be among the greatest challenges facing humanity. But not for what is considered by many to be the greatest band of all time: The Beatles. With 13 studio albums released over eight years – more than 50 years ago – John Lennon, Paul McCartney, George Harrison and Ringo Starr are still a source of musical and behavioral influence for all generations, in the four corners of the world.

We look back at the 15 Songs That Captured The Beatles’ Soul:

Recorded without too much dedication between 1979 and 1980, but spurred on by the brutal crime suffered by Lennon, which led to the rewriting and recording of ‘All Those Years Ago’, we find ourselves before the weakest album in Harrison’s solo career, if not We count his musical dabbles prior to All Things Must Pass. Although lazy doesn’t mean to say bad either, since it can’t be said that this great musician recorded a bad album in his entire career.

‘All Those Years Ago’, to say that it was composed before the assassination of John Lennon in December 1980, but after the fact George changed the lyrics for his final recording in such a way that it remained as a tribute to the figure of Lennon, a grateful acknowledgment of the influence that Harrison received from him (“Living with good and bad / I always looked up to you”), where the best thing is the characteristic guitar sound through which George always pleases us. It should also be noted that the drums are played by Ringo Starr and Paul and Linda McCartney participate in the choirs along with their then partner in Wings, Denny Laine.

Harry Nilsson was a great friend of John Lennon in California where they shared many nights together, especially during John’s “lost weekend”. They even came to blows out of the legendary Troubadour room in Los Angeles after a night full of alcohol. Well, years before Harry became famous, he released this song that had an alternate title of “All For The Beatles.” He decided to publish the song under the pseudonym “Foto-Fi Four”.

‘Too Many People’, where the highlight is a manic for the album, RAM and impressive guitar solo, and ‘3 Legs’, which is nothing more than a devoted rock ‘n’ roll of its classic style, but at least it has a different and intriguing ending where a melody arrives interpreted in a way that recalls ‘Wild Honey Pie’, from the White Album of the Beatles.

The breakup of The Beatles meant the overflow of individual talents. Each of them had plenty of material to tackle solid solo careers. But, among them, it was George Harrison who had the largest amount of treasured material during the last stage of the Liverpool group, of which only a few songs ended up on record.

In that final stage, Harrison was the first to release a solo work (Wonderwall Music in 1968, soundtrack of Joe Massot’s film), which in turn was the premiere of the Apple label, owned by the group. He then followed up with the Electronic Sound experiment where he tinkered with the newly invented Moog synthesizer.

It is probably the best album released by a beatle. In the midst of this momentum, Harrison undertook the August 1971 Concert for Bangladesh, the first benefit concert of its kind, accompanied by many of his musician friends. Exhausted by the experience, George increased his devotion to Hindu spirituality, particularly Krishna through his friendship with A.C. Bhaktivedanta Swami Prabhupad, a kind of mentor who helped him take his spiritual plane more and more seriously.

This process was fully reflected in his new songs, which fleshed out his next studio effort, Living in the Material World, whose packaging also clearly shows that devotional aspect.

‘When We Was Fab’, despite being a tribute to his time in the Beatles and having a good updated psychedelic sound, is weighed down by a chorus that is too simple and repetitive. Although it is worth recognizing the phenomenal bridge that it presents (“And while you’re in this world”), where an atmosphere similar to the legendary ‘I Am The Walrus’ is created.

After the Beatles broke up, John Lennon and Paul McCartney spent a lot of time getting weird. In his angriest phase Lennon recorded “How do You Sleep?”, a harsh criticism of his ex-partner. The song had lines like “The only thing you done was Yesterday” and “A pretty face may last a year or two/ But pretty soon they’ll see what you can do/ The sound you make is music to my ears/ You must have learned something in all those years.” my ears/ You should have learned something in all these years). Aggressive right?

Not many things are known about the relationship between Bob Dylan and the Beatles, there was always an unknown above it. Yes, it is known that he had a close relationship with George Harrison, but it was Lennon who inspired him in this song. Lennon said he didn’t like it when he first heard it, but later admitted “I just didn’t like what I felt like I was feeling, I thought it was a complete parody, you know, but it wasn’t. It was great. He wasn’t playing any tricks on me. . He was just passing through for a moment.”

“Glass Onion” is a song composed by John Lennon in which he laughs at those who were looking for hidden meanings in the lyrics of the fab four. Therefore, he deliberately included references to other songs such as “Strawberry Fields Forever”, “Iam the Walrus”, “Lady Madonna”, “The Fool on the Hill” and “Fixing a Hole”.

The Beatles threw a party for the Monkees when the group was on tour in London. The band always had a good relationship with Ringo and company, so years later they decided to make this song in tribute to the band from Liverpool.

Elton John was another of the artists who had a great relationship with John Lennon, in fact, he was the last person to share the stage with Lennon. It was on Thanksgiving Day in 1974, at New York’s Madison Square Garden with “Whatever Gets You Heart.” Eight years later he dedicated this song to him when his friend John Lennon had died.

It should be noted as novel (not outstanding) the memories he has towards his two deceased former Beatles companions: towards John Lennon, the interpretation of the song he dedicated to him for his death (‘Here Today’); towards George Harrison, a vulgar interpretation of ‘Something’ with the ukulele, Harrison’s favorite instrument, just as he did in the tribute concert that was given to him. As a tribute to his friend there is nothing to object to, but musically it is a way of dismembering a brilliant composition like ‘Something’.

Cher, like Ringo Starr, was one of the biggest icons of the 1960s. Both were known for their part in the music industry and a great sense of humor. However, generally, these two figures are not associated by fans.

Cher launched her solo career with a song called “Ringo, I Love You”, but with the stage name Bonnie Jo Mason. Later, Cher used this name to record vocals on the Wu-Tang clan’s album Once Upon a Time in Shaolin.

The track was released in 1964, and it’s not exactly a classic, however, there is tremendous talent behind the songwriting. According to the book Cher: Strong Enough, Sonny Bono got legendary producer Phil Spector to produce the song. At the time, Cher was just 18 years old.

Starr’s success was so enormous that some singers wrote and sang songs referring to him, as is the case of Penny Valentine’s song “I Want to Kiss Ringo Goodbye” and that of Rolf Harris, which bore the title from “Ringo for President”.

This Californian group is best known in the Rock era for their 1958 single 26 Miles (Santa Catalina) for Capitol Records, which reached second place in popularity in North America. They had relevant activity on the Hit Parade gringo charts from 1956 to 1964, when their last hit was a curious song called A Letter To The Beatles, which reached number 99 on Billboard.

A song that arises in the middle of the legal battle that meant putting an end to The Beatles as a “company”, rather than as a band. This “blues” of “sue me” and “I sue you” is a clear response to what was happening, on the one hand between Paul McCartney facing Ringo, John and George in court.

But, on the other, to what Harrison felt at the time: friends were lost. There’s an “us” in the song and it’s not too hard to get the idea that George was talking about the four of us. It is not a song against McCartney – not at least in the tone of those made by Lennon – but against the situation. George was very smart when it came to these things.