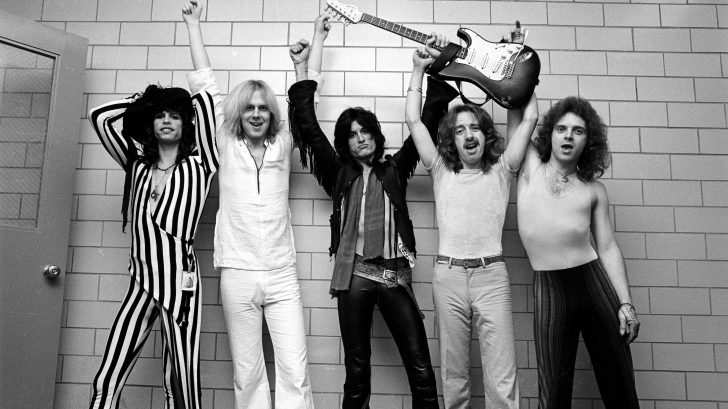 Rock bands like Aerosmith are not many anymore these times. But their legacy is not restricted to music. The excesses and lack of control have given us great stories of which they will be more or less proud.

Of course Aerosmith has a few. We are going to list 15 Wildest and Weirdest Aerosmith Stories that you probably did not know about them and that it is very possible that they will leave you shocked. We have tried to order them by “intensity” from lowest to highest and grouped by themes. We hope you enjoy it.

They Lived Confined in a Small Room

The beginnings are always difficult and for Aerosmith too. In the early days of the band all the members lived in a small apartment in Boston and spent the day eating rice and vegetables and watching “The Three Stooges” while listening to Jeff Beck, Cream and Deep Purple.

When he was 27 years old, he fell in love with Julia Holcomb, a teenager who was just 16 years old. To get rid of some legal problems, he convinced the young woman’s parents to sign the custody of his then-girlfriend. They separated after she had an abortion and she returned to her parents at age 17.

It was a big crisis. It’s a major thing when you’re growing something with a woman, but they convinced us that it would never work out and would ruin our lives. … You go to the doctor and they put the needle in her belly and they squeeze the stuff in and you watch. … I was pretty devastated. In my mind, I’m going, Jesus, what have I done?

Walk This Way – How It Came To Life

During the walks that the members of the band sometimes took, the dialogues they had between them ended up becoming song lyrics. They explain to Tyler how one of these rides got twisted.

Douglas: “When we needed lyrics, we would go out for walks. Being Sunday afternoon, there was absolutely no one on the street. When we got to 42nd Street, ”Young Frankenstein“ was playing in one of those theaters. The whole band went in to see the movie, and when that line came up – ”Walk this way“ – we were all in hysterics. And when we got back to the studio, I started walking around like Marty Feldman.”

Tyler Forgot “You See Me Crying” Was Their Own Song

In 1984, they reunited after a few years away from the stage. The members were so drugged and drunk that during the rehearsal they did not remember the lyrics of the songs, however the one who was worse was Tyler, who did not remember that a song was his.  “You See Me Crying”, from the Toys In The Attic album, started playing, and Tyler told Perry that this song was very good and that they should do a version. Perry replied something like: “but if it’s us, idiot”

It was the first single from their first album, the beginning of everything…

But really the song was written by vocalist Steven Tyler in 1965, when he was 17 years old and Aerosmith didn’t exist. The song was first performed live at the Shaboo Inn in Willimantic, Connecticut in 1969 with Steven’s old band, Chain Reaction.

Steven composed this song dedicated to his father, a student at the prestigious Juilliard School of Classical Music. He always repeated to his son the message of the chorus of the song…Keep dreaming…Steven confessed to having taken the chords and the melody of the pieces of classical music that his father played at home.

Living on the Edge… Another Story of Excesses

Once again drugs mark an important part of the history of rock bands. Young people who found fame suddenly and succumbed to all kinds of vices without any control. Luckily in the case of the guys from Aerosmith, the drug did not take anyone ahead, but it did with many other groups and of course with many other anonymous people.

Such was the amount of abuse to which their bodies were exposed, that vocalist Steven Tyler and guitarist Joe Perry earned the nickname “Toxic Twins”. Tyler’s physical and mental state became truly deranged at times in the late 1970s.

They talk about the scarves that Tyler puts on the microphone stands, not only have the ornamental function or that of providing glamour. It is rumored that they have pockets in which Steven kept, keeps, some other stimulating substance.

They recorded the Pump album on the same dates and in the same studio as Motley Crue’s Doctor Feelgood. According to Nikki Sixx in the Crue biography book, Tyler and he were going jogging and drinking water, they were in the middle of detoxification… in fact they had the same therapist.

Isolated to Detox Without Success

Draw the Line is the band’s fifth album and was recorded in an abandoned convent near New York City, the band lived there while recording the album with the initial intention of detoxifying. But eventually they ended up getting high again shooting guns and driving dangerously between sessions.

Steven Tyler met Paul McCartney in a backstage bathroom at London’s Hammersmith Odeon. Apparently Paul came in and said Hey! Steven Tyler, damn, I love your music!’ And patted him on the back with his free hand. Nervous, he turned around and almost urinated on the Beatle’s leg.

Documentary on NatGEO about Steven Tyler

During the National Geographic Channel documentary series: The Incredible Human Machine, an experiment was conducted in which a team of experts analyzed the inside of Tyler. The purpose was to evaluate how various functions are carried out and performed within the human body, to appreciate the potential and capabilities of our body. In this case, the experiment focused on the tension of the vocal cords, subjected to extreme cases, as a case example, they turned to Aerosmith vocalist Steven Tyler.

The experiment was carried out during a concert in front of thousands of fans of the group. The specialists were behind the scenes monitoring the inside of Steven Tyler’s throat, measuring the data and detailing the observations in real time, thanks to new technologies.

The results surprised several of the experts, as the analysis showed that Tyler’s vocal cords collide with each other more than half a million times during a concert alone.

Liv Tyler, the famous leading actress of the saga “The Lord of the Rings” and the blockbuster film, “Armageddon”, was born in Portland, United States, and throughout her childhood she believed that she was the daughter of the union between Bebe Buell, a famous former Playboy bunny and groupie , and Todd Rundgren, rock star of the 70s. At the age of 14, he learned that his biological father was none other than Steven Tyler, the singer of Aerosmith.

Steven Tyler Started Taking Drugs At The Age of 16

There is practically no drug that Tyler has not tried, according to what he published in his autobiography. He started at the age of 16 with grass, and continued with acids, coke and alcohol. Such addictions led to hepatitis C and several visits to detox clinics.