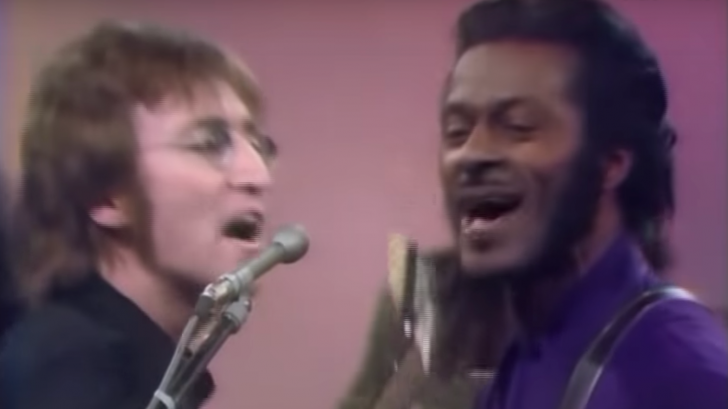 No One Saw That Coming… Not Even Chuck!

Yoko Ono is that diva friend you have who hates it when someone upstages her. She doesn’t like to be left behind and even more so, she can’t stand JUST being in the background. And the proof is right here, ladies and gentlemen. Normally, if music legends like John Lennon and Chuck Berry are performing together, you’d be more than content to play along with them. But obviously, Yoko Ono somehow thought she deserved to share the spotlight with them.

And what you’re about to see is equal parts embarrassing and horrifying for all parties involved, including the audience. It makes us cringe so hard we’d probably wish the earth would swallow us whole if we were even there.

So here’s a quick backstory. John Lennon and Yoko were invited on February 1972 to take over The Mike Douglas Show for an entire week. One of the guests was Chuck Berry and of course, he performed with John.

“[Berry] was writing good lyrics and intelligent lyrics in the 1950s when people were singing ‘Oh baby, I love you so.’ It was people like him that influenced our generation to try and make sense out of the songs rather than just sing ‘do wah diddy.'” – John Lennon

For reasons unknown to us (we’re filing this under “Things We Will Never Understand And Forever Baffle Us”), Yoko Ono decided to join them mid-song. And when we say JOIN, we actually meant she started making bizarre sounds. Is she screaming? Are those bird calls? Or is she chanting some ancient curses?

We actually don’t know. But what cracks us up is Chuck Berry’s reaction as he tries not to break character even as his beloved classic song was being ripped apart.

Why did she do it? Apparently, it’s her thing. One time, she did that particular weird scream too when John played with Eric Clapton and another when John jammed alongside Frank Zappa. Oh good thing Chuck isn’t the only one who’s traumatized.