Assertions like this do not stop pointing out that the Liverpool native had a more than a fruitful musical career that could have gone further had it not been truncated by his tragic murder in 1980.

John Lennon formed together with Paul McCartney the most unforgettable tandem in popular music. Together they enlarged the legend of the Beatles, the most influential band of all time. But Lennon was much more than a Beatle, and this is demonstrated by his successful solo career between 1970 and 1980. He was a unique and unrepeatable composer, although he was also involved in numerous controversies. Below are the 20 Iconic Moments From John Lennon’s Life:

The First Meeting Of John Lennon and Paul McCartney

On July 6, 1957, John Lennon and Paul McCartney spoke for the first time, before becoming the songwriting duo that revolutionized the music industry. The two young men met at the Woolton Church Parish Fete, where The Quarry Men, John’s first group, was going to play, who was 16 years old, while Paul was 15.

As John and the Quarry Men were preparing for their performance, McCartney appeared backstage, intending to impress Lennon, and played the famous Eddie Cochran’s’ Twenty Flight Rock ‘and also played’ Be-Bop-A-Lula. ‘by Gene Vincent, one of the first singles of that new style called Rock N’ Roll.

When the band was christened The Beatles in 1961, they traveled to Hamburg, Germany, on what was a chaotic tour, but it undoubtedly made them stronger and prepared for what was to come. Upon returning to their native Liverpool, the quartet began to play every day at The Cavern Club, where their popularity grew daily.

On November 9, 1961, after seeing the band’s name in Mersey Beat magazine and on Liverpool posters, the owner of a record and musical instrument store named Brian Epstein became curious. In Epstein’s biography, written by Derek Taylor, he notes: “I was immediately struck by their music, their rhythm and their sense of humor on stage, and even later, when I met them, I was again struck by their personal charm. And that was where it really started ”.

Finally, on December 10, he suggested becoming the manager of the band after meeting with John Lennon. The group signed a five-year management contract on January 24, 1962.

John Lennon Wanted To Become A Member Of The Monty Python

Beyond his own music, Lennon had his personal tastes. For him, the best album of all time was the namesake of The B-52’s from 1979 (especially the song Rock Lobster) and on more than one occasion he even mentioned that he would have liked more to be a member of The Monty Python than of The Beatles. In addition, although he was socialist and pacifist, the singer and guitarist enjoyed a bit of capitalism by compulsively playing Monopoly during the tours.

Lennon’s artistic restlessness was not limited to music. He became interested in literature and managed to publish two books with notable sales success: ‘In His Own Write’ in 1964 and ‘A Spaniard In The Works’ in 1965.

The Beatles gave only two concerts in Spain. But that tour was not the only time that the Beatle stepped on Spanish soil. In 1966, Lennon moved to Almería to shoot ‘How I Won The War’, a comedy directed by Richard Lester set in World War II.

The cover of Sgt. Pepper’s Lonely Hearts Club Band (1967) is a dense collage of faces and characters in which even those conspiracy clues about Paul’s death are sought. However, during the creative process, John proposed that Jesus and Adolf Hitler be included in it. Obviously, the rest of the members of the group flatly refused the incorrect request.

Lennon’s Obsession Of The No. 9

It was said that John Lennon was the first of the Fab Four to try marijuana and that he introduced the rest to its use. Nothing is further from the truth, the person responsible for it was nothing more and nothing less than the famous folk singer-songwriter, Bob Dylan. On August 28, 1964, they were together in a hotel room in New York and, after a few drinks, Zimmerman let them taste his joint. Lennon took it and gave it to Ringo designating him as his “official fitting room”. Starr, who did not know about passing it, smoked it as if it were a cigar. You can imagine how it ended.

The Beatles had made history with their self-titled album released in 1963, which became the fastest-selling debut album in England. For that reason, in November of that year, they performed at the Royal Variety Show in London, an annual televised event in which various artists perform live for Queen Elizabeth. Before introducing the song “Twist and Shout”, John, who was always the most scathing and rebellious of the group, launched a working-class joke, in the face of the English Monarchy, which read: “Those of you who are in the cheapest seats, please clap your hands. And the rest, make your jewels ring .”

John Lennon: “WE ARE MORE POPULAR THAN CHRIST”

In 1996, the Beatles were ready to give one last tour of the US, when the most conservative society in the US erupted with anger. In March of the same year, John Lennon had given an interview to the British newspaper London Evening Standard, where he commented that Christianity was in decline and that the Beatles had become more popular than Jesus Christ.

John Lennon secretly got married in 1963, when he got his girlfriend Cynthia Powell pregnant, with whom he had his first child, Julian. Brian Epstein, who was the baby’s godfather, suggested that John hide his marriage and parenthood for a time, so as not to affect the group’s popularity with teenage fans. The marriage finally ended in 1968, when Cynthia suspected her husband’s affair with a Japanese artist. That artist was Yoko Ono, whom he met on November 7, 1968, the day before his exhibition “Unfinished Paintings And Objects”, when he received exclusively John Lennon to see his exhibition.

John And Yoko On The Bed Of Peace

John and Yoko got married on March 20, 1969, and knowing that this celebration would get all the media attention, the newlyweds decided to use publicity to promote world peace, in the middle of the Vietnam War. Both spent their honeymoon in the presidential suite of the Hilton Hotel in Amsterdam, for a week, between March 25 and 31, inviting the world press in their room. They did the same in Montreal, on May 26 at the Queen Elizabeth Hotel. During their seven-day stay, with various guests, they recorded the pacifist anthem “Give Peace a Chance” on June 1.

When Lennon Arrested For Possession Of Drugs

On October 18, 1968, John and Yoko were arrested in London, by the anti-drug squad, in the morning. Police searched the home and found 219 grams of cannabis and took the couple to Paddington Green Police Station. There they were accused of obstructing the work of the police in carrying out a search warrant.

He bought an island in Ireland called Dorinish Island which was known to the surrounding people as Beatle Island. A philanthropist by nature, the Beatle allowed large numbers of people to live there. However, when he died, Yoko Ono, his controversial wife, sold the island and donated the earnings to charity.

The Car Accident With Yoko And Sean

He was the worst driver of the band due to his scandalous myopia. He got his license at the age of 24 so he wasn’t the only one who didn’t drive. He stopped getting behind the wheel after suffering an accident while traveling through Scotland in 1969 where his car flipped over with Yoko Ono and her son Julian inside. After that, while 17 stitches were being sewn into his wound, he decided to use a chauffeur for the rest of his life.

Lennon Didn’t Believe In The Beatles

At least he affirms it in his song God, published as a solo artist in 1970. In this song, he lists a series of people and concepts in which he does not believe: magic, the i-ching, the Bible, the Tarot, Hitler, Jesus, Kennedy, Buddha, the Mantra, Gita, Yoga, the kings, Elvis, Zimmerman or the Beatles.

Lennon And His “Lost Weekend”

In September 1973, with The Beatles already separated, John Lennon also separated from Yoko Ono, after four years of marriage. It was the first time the musician had been single in a long time, having been married to Cynthia and to world fame, since his early 20s. At the age of 33, Lennon began to connect with friends old and new, such as Keith Moon of The Who, his former partner Ringo Starr, David Bowie, and Phil Spector, the producer with whom he recorded the incidental album ‘Rock N’ Roll ‘, which it came out two years later.

The former Beatle was accompanied by May Pang, Yoko Ono’s young assistant. The latter handled the finances of her husband, who had to raise money by selling Ringo his white mansion in Tittenhurst, where he had lived and recorded “Imagine,” a year earlier.

Lennon’s “Lost Weekend” lasted 18 months, until a concerned Yoko Ono called Paul McCartney, to step in and get him out of bad influences. 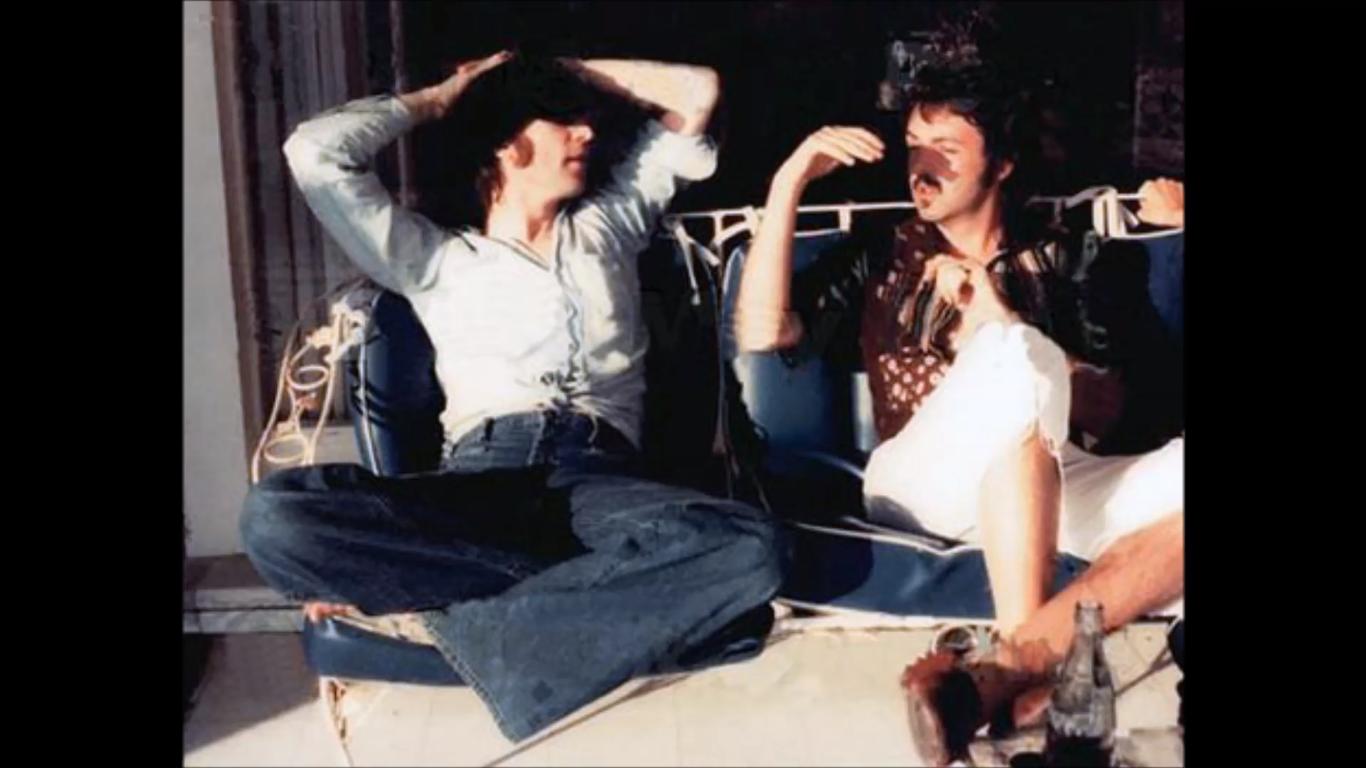 The last photo of McCartney and Lennon together. New York (1974) Souce: YouTube

In 1975, Lennon appeared on a British music program called The Old Gray Whistle Test. The entire program was running on a budget of £500 and this time they could only pay him £15. For some reason, he asked that his salary be spent on buying some English chocolate chip cookies that he couldn’t find in the US. Sure enough, they paid him with cookies.

John Lennon had become a father at the beginning of Beatlemania, so constant travel made him an absent husband and father to his family. When he divorced the mother of his first-born, Paul McCartney composed the song “Hey Jude”, to lift the spirits of Julian, who was going through the harsh divorce of his parents. After the “lost weekend”, Lennon returned with Yoko and the two started a family, with the birth of Sean, on October 9, 1975. In order to avoid making the mistakes of the past, John leaves the recording studios and hangs up his guitar, to dedicate himself to being a full-time father. John was by his young son’s side and, incidentally, managed to reconnect with a pre-teen Julian, who stopped by more often than before.

Finally, on December 8, John Lennon was assassinated at the entrance to the Dakota building in New York, upon returning from the studio, where he was working on the music of Yoko Ono. A distraught fan shot the musician multiple times in the back, leaving the world heartbroken. Hours later, the streets of New York woke up filled with people who flooded the streets with tears and anger, for the unjust death of one of the greatest musical idols of the 20th century.