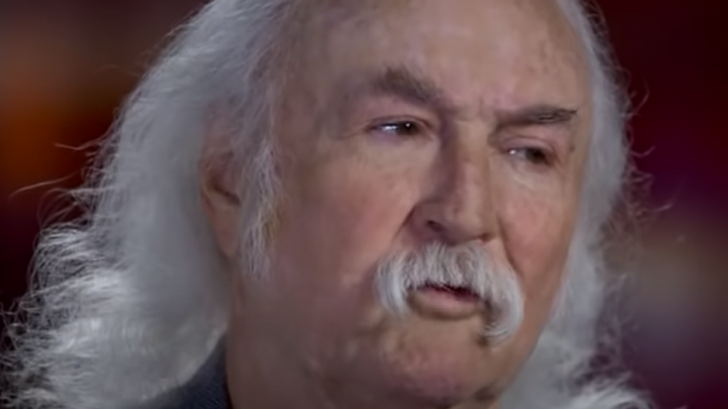 Over the course of his career, other musicians have frequently invited Crosby to participate on their recordings so that he might improve them with his harmonically inventive voice abilities. Crosby played with both anticipated, Mitchell, James Taylor, Jackson Browne, Carole King, and of course, Stephen Stills, Graham Nash, and Neil Young and unanticipated artists such as John Mayer, Gary Wright, and David Gilmour of Pink Floyd.

Crosby passed away on January 19, 2023, at the age of 81. Whether Crosby collaborated alone or frequently with Nash, his credits as a collaborator are many and varied. Some of the appearances we considered to be the most notable are mentioned below under the 20 David Crosby Best Collaborations.

Crosby was given the task of producing Mitchell’s debut album. He took her to Sunset Sound Recorders, where he attempted an experiment that utterly failed by placing mics all over the place as she sang at the piano. However, he eventually did Mitchell and her songs a favor by limiting the recordings to Mitchell alone, with Stills contributing bass to one track. In 1974, they would reconvene for Mitchell’s Court and Spark, contributing backing vocals to the songs “Down to You” and “Free Man in Paris” with Nash. They would meet once again for 1975’s The Hissing of Summer Lawns, joining Nash on the album’s first track, “In France They Kiss on Main Street.”

On the rendition of “Wooden Ships” by Jefferson Airplane, which he co-wrote with the band’s Paul Kantner and Stills (who played organ on the album’s “Turn My Life Around”), Crosby is given credit for the sailboat ambiance. The same year, Crosby, Stills & Nash released their interpretation of the trio’s self-titled debut album. Additionally, he collaborated with Jack Casady and Jorma Kaukonen on Hot Tuna’s Burgers in 1972 and made an appearance on Grace Slick’s debut solo album, Manhole, in 1974.

For his former bandmate’s self-titled debut solo album, Crosby joined Rita Coolidge, John Sebastian, and Priscilla Jones in the vocal chorus on the songs “Love the One You’re With,” “Sit Yourself Down,” “We Are Not Helpless,” and “Go Back Home.”

Paul Kantner and Jefferson Starship, Blows Against the Empire (1970)

As a member of the original Starship band, Crosby contributed vocals to the songs “Mau Mau,” “Starship,” “A Child Is Coming,” and “Have You Seen the Stars Tonite,” on which he also played guitar and received co-writing credits.

Naturally, Crosby was going to be on his closest friend Nash’s debut solo album, playing electric guitar on the song “I Used to Be a King.” Crosby also appears on the record’s follow-ups, Wild Tales in 1973 and Earth & Sky in 1980.

Crosby sang backing vocals for “Are You Ready for the Country” and, together with Stills, “Alabama” on Young’s fourth (and most popular) solo album, Harvest. The following year, Crosby also made two appearances on Young’s Time Fades Away live album.

When Browne released his self-titled first album in the early ’70s, which featured the iconic smash “Doctor My Eyes,” Crosby and Nash were both on board. Three years later, they contributed backup vocals to the album’s title track from Browne’s masterpiece The Pretender. In addition, Crosby returned for the films World in Motion (1989) and I’m Alive (1993).

The opener tune and smash single “Mexico,” as well as “Lighthouse,” were written by Crosby and Nash when CSN(Y) was on sabbatical. Crosby and Nash returned for “Nothing Like a Hundred Miles” from Gorilla’s follow-up, In the Pocket, in 1976.

The sixth and last Lou Adler-produced album by King featured backing vocals from Crosby and Nash. Additionally, the trio sang harmony with King on “You’ve Got a Friend” from her In Concert CD from 1994.

On his sixth solo album, The Dream Weaver requested the Crosby-Nash duo and Michael McDonald of the Doobie Brothers to sing.

Crosby was happy to assist an old friend by singing with Nash on the Michael Ruff-penned song “Cry on My Shoulder” on Nash’s Grammy Award-winning comeback album. Crosby would later return for “Circle Dance” on 1994’s Longing in Their Hearts.

Collins enlisted Crosby to sing harmony on the hits “Another Day in Paradise” and “That’s Just the Way It Is” for his fourth solo album. In 1993, Collins returned the favor on Crosby’s Thousand Roads.

Don Was, who had also produced Raitt’s Nick of Time, sought Crosby once again to provide background vocals on the Dylan album he and his “brother” David Was produced at the start of the decade.

Willie Nelson, Across the Borderline (1993)

For Nelson’s 40th album, which included duets with Dylan, Raitt, Paul Simon, and Sinead O’Connor, Crosby was one of the group of supporting vocalists enlisted. However, it is unknown if Crosby ever boarded Nelson’s illustrious bus.

On his most recent two solo albums, Crosby collaborated with the Pink Floyd guitarist twice, along with Nash. On an Island’s title song and its follow-“A up’s Boat Lies Waiting” both include them. While promoting Rattle That Lock, Gilmour remarked to this reporter, “They have wonderful voices.”

The Eagles guitarist gave it everything he had on Road to Forever, his first solo album in 29 years. The album’s opening song, “Fall By the Grace of Love,” features vocals from Crosby, Stills, and Nash.

Once more, Don Was contacted the duo to incorporate their harmonies into one of his projects; this time, it was the title tune on Mayer’s fifth studio album.

Crosby and Nash were among the high-profile guests on Walsh’s first new album in 20 years, Analog Man, for the song “One Day at a Time.”