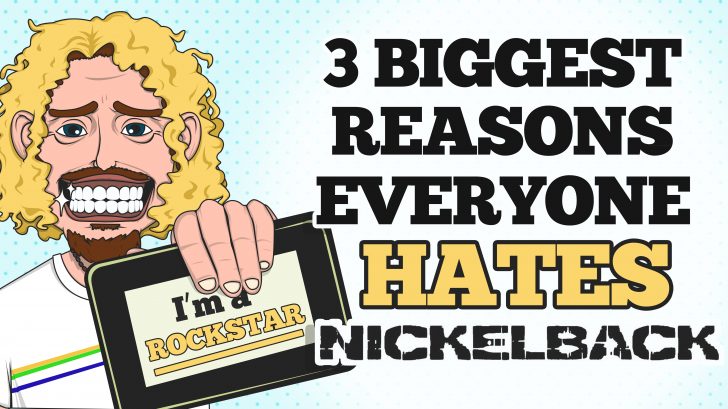 The only exact reason why so many people seem to hate Nickelback is because of how popular they are, selling over 50 million albums all over the world. They are even better than the artist today…The hate for Nickelback has become an inside joke over the years. I guess, just enjoy the music that you like…

So to answer your question in a summed up way…

1. Because the Internet told them to

Is it necessary to believe everything you see or read on the internet?

Just like some of the other famous people, Nickelback is one of the most hated bands on the internet. Most of these haters think it’s just “cool” to condemn people who have made a lot happened for themselves… What’s up with that?

Truth be told, we are one of those people who loves to criticize them because of what we see or read about them. Agreeing on something with a little knowledge of what really is and it doesn’t make any sense… IT’S POINTLESS… And no matter what we do, it will never stop as they became the advertisement of the word “MEDIOCORE”.

So, how many years have you hated Nickelback??

2. Jealous they built an empire off simple rock progressions

YOU THERE…! What have you offered into the world of ROCK and ROLL???

I smell jealousy in here… There is no denying that at some point in their career, they have produced some really good stuff… Something worth listening to.

But the hate has remained intact in people’s mind… Why don’t we just let it go folks. We are talking with no visions here. They made something happened by themselves.

Just because they are something that you’re not, it does not give us the right to attack them. Not that any of my opinion matters, just go ahead and do your thing… The fact is still a fact, they are still better than any of us…

3. They don’t like Chad Kroger’s voice even though every other early 2000’s grunge band had the same style

Have you heard the band CREED folks? Same voice and same style but not the same hate…

What’s up with the hate on Chad’s voice, he has the same one as Scott Stapp of Creed and maybe just like with STP’s late vocalist Scott Weiland… They sound all just the same, and yet no love for Nickelback…

He can even sing better than you… Are we just pretending or are we ignorant? Well, maybe they don’t care what we say or what we think about their music. They make more money than any of us, anyways….