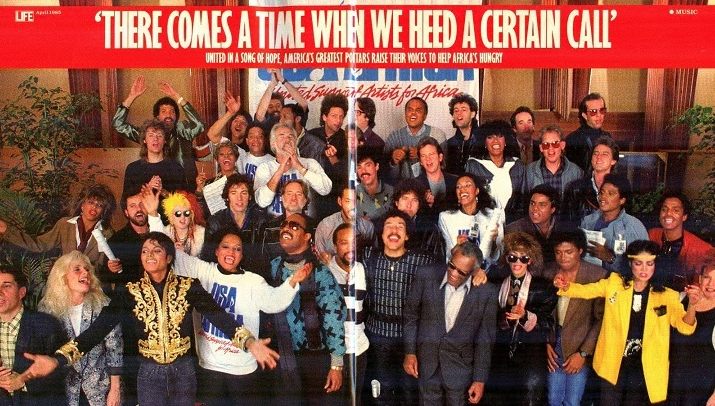 The song was written as a charity single by 37 of the world’s most talented and famous artists, who made up United Support of Artists (USA) for Africa. The songwriters were mega music world players, Michael Jackson, Quincy Jones, and Lionel Richie. Jackson and Richie wrote the song 7 weeks after the success of Band Aid’s (UK) charity track  “Do They Know It’s Christmas.” The writing was completed in a week at Michael Jackson’s Hayvenhurst home in Encino, California.

The first official night of recording was January 22, 1985 at Kenny Rogers’ Lion Share Recording Studio on Beverly Boulevard, also in California. This night was just Lionel Richie and Michael Jackson recording a vocal guide for “We Are The World,” with guidance from Quincy Jones and Stevie Wonder. It took 6 takes!

With so many mega hitters planned to join in during the studio recordings, Quincy Jones decided that there needed to be a lot of perspective involved in the lyrics.

“One thing we don’t want to do, especially with this group, is look like we’re patting ourselves on the back. So it’s really, ‘There’s a choice we’re making,” Quincy contextualized.

On January 24, 1985, producer Jones shipped out cassettes to every artists who was invited to record “We Are The World.” The casettes had specific instructions”

“My Fellow Artists, The cassettes are numbered, and I can’t express how important it is not to let this material out of your hands. Please do not make copies, and return this cassette the night of the 28th. In the years to come, when your children ask, ‘What did mommy and daddy do for the war against world famine?’, you can say proudly, this was your contribution.”

The final night of recording took place at A&M Studios in Hollywood, CA on January 28, 1985. Michael Jackson was the first to arrive- at 9pm. Many of the artists to arrive after were coming straight from the American Music Awards ceremony. A sign tacked to the door welcomed the artists into the studio:

“Please Leave Your Egos At The Door”

The actual singing started at 10:30 pm. Two Ethiopian women also joined in the studio, as part of the recording’s profits would go to aid a recent famine in Ethiopia. As hours passed, the track was completed at 8am. The song is intended to be a song of “compassion” for the world. Upon it’s release in March, the single sold all the original 800k albums and went to number 1 on the charts- globally.

“We Are The World” became the most successful selling single in US pop music history. and was the first-ever single to become certified multi- platinum. Then became 4x Platinum through the Recording Industry Association of America.

The song raised $63 million dollars for the famine in Africa ($141 million with inflation).

Check out the video below to watch all 37 artists record together!