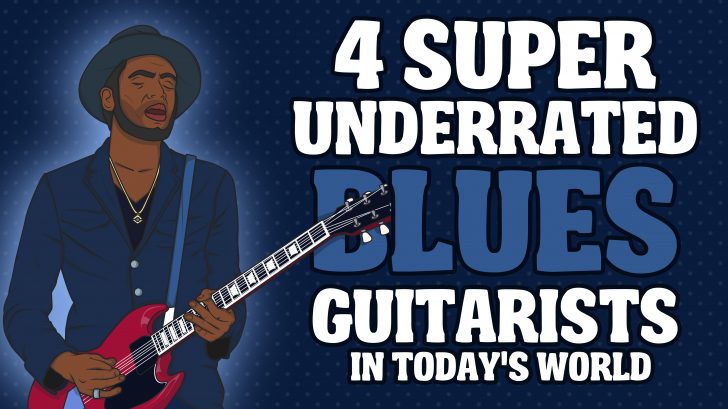 The superheroes of blues. They brought balance to the force! The new Jedi masters of blues music. They are the chosen ones and yet they are so underrated! AHHHHH!!!! The biggest problem in blues music today is that many artists are unknown and that’s the main reason why they are underrated, not being famous… You should notice these blues guitarists, people! They resurrected the blues music back to life! Nowadays, you don’t often see younglings having an interest in blues music because we are now living in a pop cultured generation. But gladly, these underrated blues guitarist in today’s world has given us hope.

Proceeding on this track, here are your 4 Super Underrated Blues Guitarists in Today’s World.

Sit down and wear your seatbelt on!

Listen to Joe’s song “Sloe Gin” and be amazed by how great of a guitar player Joe is and start wondering why he’s not at the top of the list as one of the best blues guitarists in today’s world. You’ll see three combinations of guitar legends into one (Jimmy Page, Jeff Beck and a bit of a Clapton). Compared to other blues player today, Joe can also give you that great rhythm that blends in with his band and that is something you don’t see with other guitar players.

It is pretty hard to determine the world’s best guitar player with having all these other talents out there but the guitar solo of this song says it all.

Joe Bonamassa is definitely one of the greatest blues players we’ve never heard of!

It’s not an everyday thing for you to see Kenny Wayne Shepperd’s name on the list as one of the top blues players. Why don’t we consider Kenny on that list, that slow jam blistering blues solo of his may change the way you think of him. To hear him play, one can only imagine that this person plays from the heart who don’t lack imagination on how to produce a sound that changes your musical perspectives.

Kenny Wayne Shepherd can shred with a sweet soothing sound. He’ll surely bring you back to 90’s best years!

Listen to the guitar solo part of his song “Blue on Black”.

The force is too strong with this one!

Do you want to see Marvin Gaye and Jimi Hendrix merge into one?

Too good to be true! Ladies and Gentleman Gary Clark Jr. our new GUITAR HERO!!! To be a good singer is something, but having tremendous guitar playing skills is another thing. Clark’s bluesy solos are surely mind blowing! The emotions he pours on his guitar playing are definitely breathtaking. His song “Please come home” is one of the reason why we should be considering him as one of the greats today and that this song is also one of the best guitar solo performances in this generation’s blues music.

If we are about to change the list, let’s consider putting Gary Clark Jr. in it!

Considering he already played in the White House in front of the Former First Lady Michelle Obama at the age of 16 (you, what have you achieved by that age?). Christone ‘Kingfish’ Ingram is basically one of the most underrated blues guitarist in today’s world.

And why is that?

The kid can do anything with his guitar. Watching him play makes you feel like you’re living in the blues era of the 60’s and 70’s. A true passion for blues music. The way he plays will take him places, he will keep the blues music alive.

He will bring balance to the ‘blues’ force!