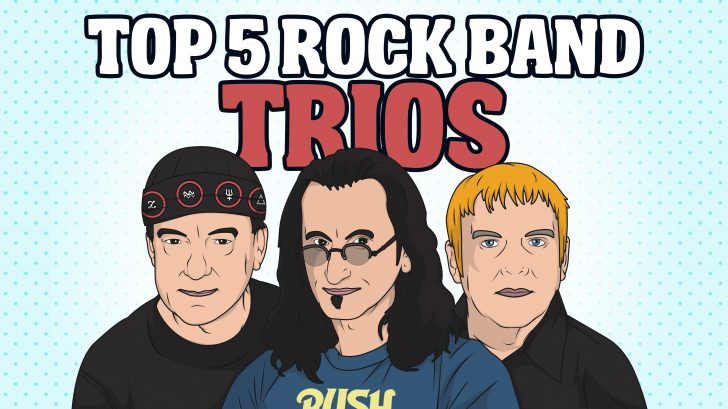 THREE IS THE MAGIC NUMBER

Why just have three members of a band? Well, because that is all they need. A bassist, a guitar player, and a drummer and anyone of each member could handle the vocals. It is pretty real that a trio can rock our world out. Some of us never knew that some of the bands here consisted of three members. We were somehow caught up with their music. The level of musicianship in a trio band is much higher than any other four-man band or any headcounts. That being said, you should check out these bands who made the cut below as the TOP FIVE ROCK BAND TRIOS.

How could a lot of people ignore an amazing trio such as this one?  It’s a shame that many people don’t recognize Triumph.

They kind of somehow sound very similar to the band RUSH, though the difference is that the lead singer is the drummer. They are most notably known for their songs Magic Power, Hold On and Lay It On The Line.

The three were very awesome in every way. They had a more “complete” sound than any other bands who consists of four or more members.

Surely recognizable by their long beards except for their drummer Frank Beard who just ironically have the last name of Beard. Blues, Hard Rock, and Rock N’ Roll never sounded finer. The sweet guitar tones of Billy Gibbons and Dusty Hill’s are definitely one of the best, smoothest, and definitely roughest in rock n’ roll.
These guys are technically strong that they were able to produce sounds that people want to get up and rock and roll.

Even your children might still be listening to these three awesome Rock Gods. They have influenced a lot of bands today. Tell me if any other band can make sounds like this little three-man band. I bet you can’t.

This band is definitely one of those earliest super trio groups in rock history and considered one of the best rock trios in history. Jack Bruce had the extraordinary vocals and one of the best master bass players.  As for Ginger Baker, he was definitely phenomenal drummer. No one was ever innovative as him in his prime. And yeah, how could we forget. Who could not recognize Slowhand?  Eric Clapton the legendary guitar hero.  If we are talking about pure talent and probably any musicians would understand this. Cream definitely has the most of it.

You should tell your kids about these guys. Let them be aware that a legendary supergroup powerhouse existed a long time ago that was Cream. They should start and end with Cream.

Just like Cream, one of the earliest three-man band in history. No one can definitely forget who they were, most notably known for their technical skills.  Jimi Hendrix can put on a show, setting his guitar on fire or play it with his teeth. Man, what a force of nature. Mitch Mitchell was one of the most awesome drummers back then but Noel Redding an amazing bass player didn’t seem to have any interest in their project.

Well, arguably we can all say that Jimi Hendrix could be counted as three persons himself, getting all the credit. And you probably didn’t know that they were a trio, or did you?

THE BEST TRIO OF ALL TIME! FULL OF LIFE, MUSICAL EXTREME COMPOSERS, WRITERS, AND ARRANGERS! They have so much talent, energy, and personality. They were definitely adored by many Rock FANS! Geddy Lee’s powerful voice is (arguably) unmatched, Neil Peart’s drumming can make any drummers look like amateurs while Alex Lifeson guitar playing skills complete everything for Rush music…

I guess it’s pretty obvious that they would top this list. Their tremendous ability to play is widely recognized by everyone. They’ve created such evolving music for us to enjoy. So, there would be no doubt that these three are the best trio band ever. It’s a wonder of how could such three amazing people make such great and amazing music. KUDOS to these guys!