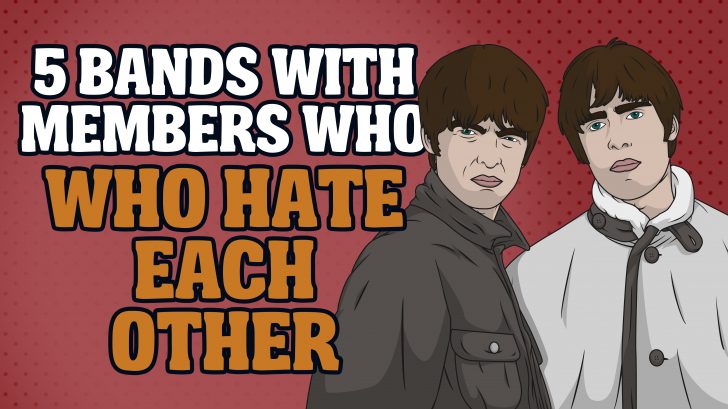 Bands may seem to have such a well put-together act on stage but there are times that that’s just part of the show! Behind the scenes, even the biggest, most popular, most talented band members have had some beef at some point. Just imagine spending every single day with the same people and in small cramped spaces such us tour buses and airplanes too, add years of doing that, plus the fame, and larger-than-life egos, and for sure a bit of hate and annoyance is bound to surface. Band member rivalries can be likened to sibling rivalries, except that more and bigger things are on the lines. Sometimes, the tension even shows on-stage or just explodes into feuds that audiences just love to eat up.

Here are five bands whose members have hated each other’s guts:

In the early ‘80s, two of the original members of KISS— Ace Frehley and Peter Criss — already parted ways with the band. While KISS is one of the most recognizable (and marketable, they literally milked everything they can get their faces on) rock bands of all time, they also have one of the drama-filled feuds band members have ever had.

The drama all started from the two deadly vices of rockstars: drugs and alcohol. Drummer Peter Criss and Guitarist Ace Rehley often indulged in their very rockstar lifestyle, but lead singer Paul Stanley and bassist Gene Simmons were adamantly against it and decided that Rehley and Criss were “not fit to wear the makeup anymore”. The estrangement got so bad that Stanley even said they don’t deserve to be in the band and that he didn’t want to perform with them during their Rock & Roll Hall of Fame induction. (They still did, btw).

However, in 2014, Frehley fired back at Simmons and Stanley saying that those two only hate him because he was a drug addict. He claims that he’s been clean for years but they still won’t forgive him.

Even in the early ‘90s, it’s already been public knowledge that GNR did not always get along. All Rose and Slash hated each other and nobody really knows what the root of the problem is. It may be Axl’s tendency to run things amuck or each other’s egos and creative differences, but the band’s old road manager Doug Goldstein claims that the reason is someone you’d never guess would cause tension: Michael Jackson. Yes, the King of Pop himself made it difficult for Guns N’ Roses to keep it together.

Goldstein has shared that after Slash agreed to play guitar on Jackson’s new song “Black or White,” Axl was pissed off and did not agree with Slash’s decision.  At that time, Jackson was up for investigation for child molestation and since Axl was allegedly molested by his father, he wasn’t exactly a keen supporter of Jackson then.

Well, they did go on their reunion tour called  Not In This Lifetime in 2016, so it seems like thence buried the Michael Jackson hatchet. Hopefully.

Over the past 30 years, Van Halen has been fronted by three men., and it doesn’t always end well for the members.  The original line up — Eddie and Alex Van Halen, David Lee Roth, and Michael Anthony — certainly did not have an amicable split, and haven’t since reconciled. Eddie Van Halen and David Lee Roth’s had issues between them that ended in a feud. In a recent interview, Eddie claimed that Roth doesn’t want to be friends anymore and that’s totally fine with the two of them. Eddie seems to have a thing about trash talking his former bandmates as he had more bad things to say about the rock band’s ex-bassist Michael Anthony, whom he claims can’t play bass. Anthony has since been replaced by Eddie’s son Wolfgang.

Sammy Hagar replaced Roth as the lead singer and had a ten-year run with Van Halen, though that ended bitterly as well. Hagar tried to reunite with the band from 2003 to 2005, but that reunion also went in ruins when Hagar accused Van Halen of unprofessionalism.

Journey is hard not to associate with original lead singer Steve Perry. Over the years he had with the band, his issues just surfaced. In a nutshell, it was just a matter of Steve Perry claiming to have grown tired of the band and felt like he never truly was part of it. So he left. Arnel Pineda, a singer from the Philippines (who does sound a lot like Perry) replaced him.

Journey then performed at their Rock and Roll Hall of Fame induction, and Perry was there, watching in the audience.

Other members Neal Schon and keyboardist Jonathan Cain have also been feuding, mostly on creative and artistic direction for the band. They have been blaming each other for their 2011 album Eclipse which was a flop.

Hopefully all these guys find a way to fix their internal beef before they explode.

Ah the Gallagher brothers! No other band members have more sibling rivalry or any internal rivalry for that matter than Liam and Noel Gallagher. They just hate each other’s guts like the plague. Early in their career, the tension already started showing on stage. Noel tried to justify and water down their rivalry saying in a 2000 interview,

“It was just drunken, f**king nonsense. … It’s just two brothers in a band who have strong opinions about how things within that band should be.”

The implosion was inevitable, their drunken opinions escalated, and all the fights and the unfriendly banter caused the band to break-up for good in 2009. The brothers’ fights were unavoidably displayed to the public that even as early as 1994, their unique brotherly feud already gained a nickname “Wibbling Rivalry”. Liam would curse out his brother to the end, and keeps calling him a “potato” countless times on social media.  Noel also stated in 2005  that Liam’s “actually frightened to death of me. I can read him and I can f**king play him like a slightly disused arcade game.”

Now that they are older, they still can’t stand each other. One thing’s for sure, they are not each other’s “wonder wall”.