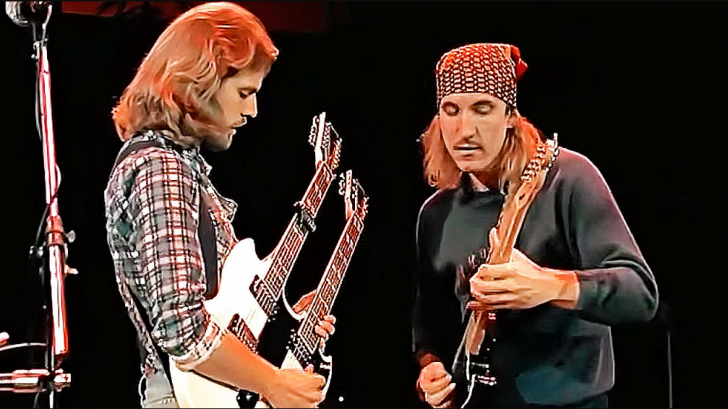 There are ´normal´ guitar solos and guitar solos that give meaning not only to the song in which they perform but also to the existence of the performer and even to the listener who joyfully enjoys them as a tearful epiphany.

These are exciting and emotional solos that, beyond their variable technical complexity, transmit sentiment and build a bridge between the artist and the audience, from the beating heart to the beating heart of deep direct communication without the need for words.

These are the 5 Career-Defining Guitar Solos In The 70s’:

It is one of the best songs by Pink Floyd, and it is precisely, because of David Gilmour’s cathedral work on guitars. It has a couple of solos, but the end stands out because it is not that it makes your hair stand on end, it stops time in a state of, indeed, comfortable and lysergic numbness.

It is a debate that has been overcome for decades: we are facing the most mammoth piece of hard rock work. Led Zeppelin brought together the whole of rock in 10 minutes, with its cane part, its evocative section, its perfect crescendo, and its incomparable solo. And not content with doing it once, Jimmy Page took a chair many others, maybe not in the same legendary spirit, but almost, as in ‘Since I’ve been Loving You’. But the song Stairway To Heaven is definitely the stairway to heaven.

The first song from the first album of ‘Van Halen’. There is no better cover letter than this Eruption perpetrated by Eddie Van Halen, one of the most influential guitarists of all time, who applies various techniques such as quick plucking, bendings, and, above all, the signature tapping of the house. The face of the stars of the time when hearing this in 1978 had to be a firecracker.

Don Felder and Joe Walsh perform the famous guitar solo of the Eagles’ title song as a duet. Perfect to add as a soundtrack to any trip on desert roads, or whether in California.

Allen Collins and Gary Rossington set fire to their Gibson Firebird I and Gibson SG, respectively, to shape a guitar battle of more than four minutes into an already epic song of up to nine minutes. Because of this composition, many saw in Lynyrd Skynyrd the American response to the British Led Zeppelin.