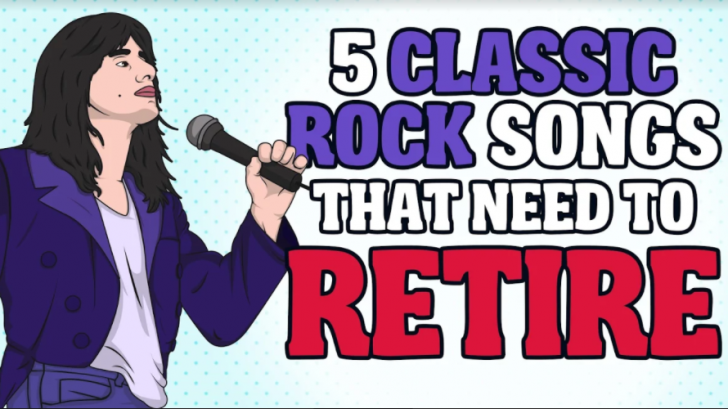 How to ruin a good song on a daily basis. Play it over and over again. Aren’t you all fed up that once a good classic suddenly became like a radio advertisement. Seems like they are only being played for you to stay tuned in. But that’s not even the worst part. The worst part is the songs are in a loop. Shuffled but in a loop. Hey, what if I tell you that we are ready to listen for something new or not even new, there are far better songs out there and you just keep ignoring them… No matter how big you make a song is people will eventually find it intolerable in the long run.

Here are the 5 Classic Rock Songs that needs to get married and stay out of our way, forever…

Before long, we used to find ourselves amused by this song, but now we are baffled and confused. Yeah sure, it’s one of Floyd’s masterpiece. The thing is that it is overplayed. But perhaps, because for some reason the hype on this song is well-deserved. It has the finest tune.

This song will surely test your temper by turning on the radio and every time you do, this is the one song that’s always been played…

Well, I guess you just have to develop a survival mechanism for your ears or something. Do yourself a favor and don’t ever turn on your radio again. By a record or something and dispose it if you’ll get fed up.

I think developing a new set of list of songs is a good and swell idea for radio stations.

People are not wrong about this song, this is a satisfactory for us. It’s not funny to even call this song a waste, although the funny thing now is that it is essentially the most overplayed classic rock song in every radio stations, worldwide!!!

More and more, it seems like every radio station wants to impregnate us with this song, this is especially noticeable everywhere! Morning, afternoon, and even late at night. It’s almost as if all the DJs has forgotten that there are other classic rock songs out there!

The fiasco of posers, they listen to this song just to show other people that they are a fan of classic rock! What a bunch of reta***.

Think of it, you’ve had a bad day at work, or simply a bad day and anywhere you roam you hear this song, what does it tell you? You don’t stop believing! Frustrated by the inability to find it amusing, and still, you accidentally sing along with it.

Your instinct proved you wrong, you falsely accused yourself that you love this song. WAKE UP! Stop believing that this is the only great song by Journey! Apologize to yourself!

It seems like you’re a hardcore Queen fanatics! And the only song you know is this one!

We have once again arrived at a moment where radio stations can make other people listen to this all day. There are those who will definitely argue that this has already happened way back then. So when will it stop? The heavy repetition of this song has become a religion.

That is why we are here to tell each and every one of you that this song is controlling you from hearing other classic rock songs!

It wouldn’t hurt you to play Highway To Hell once in a while instead of this one.

We all have existed to bear witness to the greatest classic rock song of all-time! We had to be! It needs us to hear it! So that gives it some kind of leverage.

I would like to thank Led Zeppelin for giving us this legendary song, for the astounding masterpiece, which has awakened us for decades. That being said, let this masterpiece to take its rest, because we can’t help not to hold a grudge on every classic rock radio station who always overplay this piece of work five to ten times a day! Seems like you’ve found an advertising material for people to keep tuning in on your station! That’s a cheap shot! So, in closing this, I look forward to hear other great classic rock tracks who are in need of more attention. I hope you don’t take any offense…