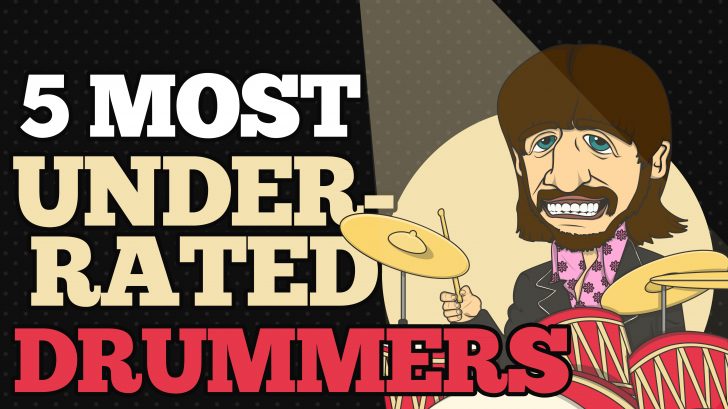 We have the overrated and here we have the underrated. We also have our own favorites, but do you think you know what real drumming is? We tend to look at a drummer’s skill as being flashy, but not on their technicality and versatility. You might even think that a drummer is great because of the band he/she is playing for, it all comes down to that. Somehow, there is also the idea where the band is one of the greatest and the drummer is only there for display, and that drummer become so underrated… You don’t hear them being mentioned all the time… I bet, some of you don’t even know the name of the drummers here listed until now. (Well, except for one or two)…. Given all these circumstances, here are your 5 Most Underrated Drummers- They Deserve Way More Credit!

We never heard of him being mentioned as one of the greats!

Have we all forgotten his awesomeness? Guys, remember “Hot For Teacher”? Those beats, kicks ass!!

As one of the co-founder of the hard rock band Van Halen. Alex may not have the luxurious fame of his brother, guitar legend Eddie Van Halen, but never forget that he’s one of the major reason why Van Halen became so successful. His flamboyant drumming skill is responsible for setting the tone for Van Halen.

Compared to this era’s drummers, Alex is (arguably) unmatched with all that speed and rhythm, and may be the main influence in today’s double bass drumming.

The badass drummer of all time! Master Baker!

Best known as the founder of the rock band Cream. He may not have the same reputation as much as John Bonham but the style he puts into his drumming is unfairly matched. To be able to play like him would definitely be an extraordinary gift!

He sets a good example to be an inspiration on how to become a great drummer. The energy he brings on stage, the chops, the coordination, the creativity, the versatility and the footwork are only the things that make him a real great drummer.

He’s definitely the real deal, there’s no doubt about it…

As the drummer of the band called Three Dog Night. Floyd Sneed is definitely one of the most underrated drummers of all time. The versatility in his drumming techniques is indescribable. Having such a reputation of sounding like two drummers at the same time might strike you of why he’s not on the list of great drummers of all time.

The Beatles are inarguably the best rock band in the history of music. And yet, we wonder why Ringo Starr is not considered as a great drummer…

You gotta love his style, simple but in a creative way and it’s the coolest thing ever! He may not be flashy but Ringo Starr is the only one who can play like Ringo Starr. Every drummer should learn from Ringo. The technicality of his drumming is surely crucial for every songs of The Beatles and serves as one of the DNA’s of The Beatles.

The modern drummer of the 70’s!

Best known for his work with The Tube and a founding member of Journey, Prairie Prince is an amazing talent! Sounding like a modern drummer back in the 70’s and 80’s, that’s got to tell you something. He will definitely drive you crazy along with the beat.

The greatest thing about Prairie Prince is that he’s one of the most brilliant drummer who have set foot on the face of the planet, and it’s a shame that he is now somewhat forgotten by most of us.

If you want to define what drumming is –it’s Prairie Prince.