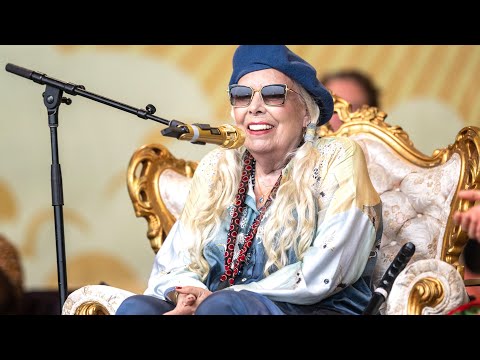 We’d wager that if you asked any musician today, Joni Mitchell’s name would come up numerous times. Her influence is complex to describe, yet it can be traced in almost every kind of modern music. This is owing in part to the reason that she began her journey as a female folk singer producing material in the middle of a male-dominated rock period. She turned a blind eye to the established norm.

She enjoyed performing in front of small crowds.

Joni Mitchell’s ability is well known now, but when she was just beginning, she went ignored. Furthermore, several of her early concerts took place in small settings where tickets were maybe unavailable.

“I liked playing the coffeehouses,” Mitchell revealed in a 2020 interview, “where I could step off the stage and go sit in the audience and be comfortable, or where there wasn’t a barrier between me and my audience in the clubs. The big stage had no appeal for me; it was too great a distance between me and the audience, and I never really liked it. I didn’t have a lot of fame in the beginning, and that’s probably good because it made it more enjoyable.”

Mitchell began his career as a painter.

Although Mitchell is well-known and respected for her musical career, she has indeed stated that painting was her first passion. She just went on to explore music when she learned she can potentially make money from it when she was young. Mitchell noted in a 2007 conversation that “music was firstly a hobby to make money to smoke at art school.” Yet, Mitchell later discovered her own artistic place in songs, but it still seemed significantly different from painting.

Glenn Frey, the guitarist for the Eagles, conducted a weekly poker game in the Hollywood Hills in the 1970s. Frey subsequently stated that Mitchell participated in these activities on a regular basis. “In 1974, I moved to a place at the corner of Ridpath and Kirkwood in Laurel Canyon, and we had poker games every Monday night during football season,” he said. “Notorious card games. Joni Mitchell got wind of those card games, and she always was a good hang, so she started coming every Monday night and playing cards with us. We’d watch football from six to nine and then play cards until the wee hours.”

Her legendary record Blue was not a commercial success initially.

“Like all of my albums, Blue came out of the chute with a whimper. It didn’t really take off until later. Now there’s a lot of fuss being made over it, but there wasn’t initially,” Mitchell revealed this during a conversation with Cameron Crowe.

“The most feedback that I got was that I had gone too far and was exposing too much of myself. I couldn’t tell what I had created, really. The initial response I got was critical, mostly from the male singer-songwriters. It was kind of like Dylan going electric. They were afraid. Is this contagious? Do we all have to get this honest now? That’s what the boys were telling me.”

She is a warrior.

Though grief has visited Mitchell several times, he has also been troubled by a few major health problems. Mitchell got polio as a youngster, which landed her in the hospital for many weeks. Fast forward more to Mitchell, 72, who had a brain aneurysm rupture in 2015. Mitchell had to learn to walk again after the incident.

Mitchell, on the other hand, fought to overcome these losses both times.

“[O]nce again I couldn’t walk. I had to learn how again. I couldn’t talk,” Mitchell revealed her brain aneurysm in a 2020 conversation. “Polio didn’t grab me like that, but the aneurysm took away a lot more, really. Took away my speech and my ability to walk. And, you know, I got my speech back quickly, but the walking I’m still struggling with. But I mean, I’m a fighter. I’ve got Irish blood! So you know, I knew, ‘Here I go again, another battle.’”

What is life? Joni Mitchell singing A Case of You with Brandi Carlile!#NewportFolkFest pic.twitter.com/61KbnaQFAj