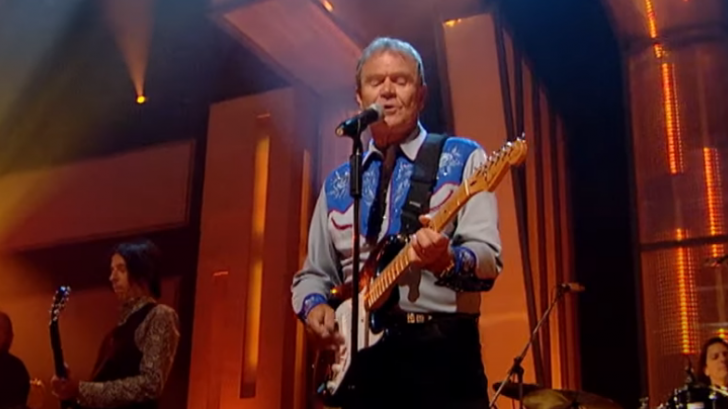 Glen Campbell was one of the great legends of country music, although it should not be forgotten that he was also a member of the Wrecking Crew, a legendary group of musicians sessions that recorded a huge number of hits recorded in Los Angeles in the 60s, with Campbell putting his guitar at the service of the Beach Boys, Elvis Presley or Frank Sinatra. Below we look at the 5 Glen Campbell Songs That Defined His Career & Country Music:

Campbell was trying to develop a solo career that would take off triumphantly in 1967 with his hit singles ‘Gentle On My Mind’. The artist’s trademark, throughout his entire career, was a melancholy mix of country and pop in which his soft and very natural voice easily embroidered the most romantic and nostalgic themes.

“Jimmy saw a guy out in the middle of nowhere, working on high line wires, that’s where he got ‘lineman for the county,’” Campbell once recalled of “Wichita Lineman,” the Jimmy Webb classic written specifically for Campbell. The track, featured Campbell’s former Wrecking Crew bandmates, is considered by many to be the best single of Campbell’s 50-plus-year career.

Campbell’s incredible rendition of Jimmy Webb’s penned Soldier’s Lament, released at the height of the Vietnam War, reflected the singer’s ideas about the war. Rhinestone Cowboy (1975)

“Maybe the best song I’ve ever sung,” once mentioned of his song, a portrayal of a road-hardened travel singer who proudly carries on to the next show. Rhinestone Cowboy topped the charts and was his comeback single at the time, and instantly became the biggest hit of his career.