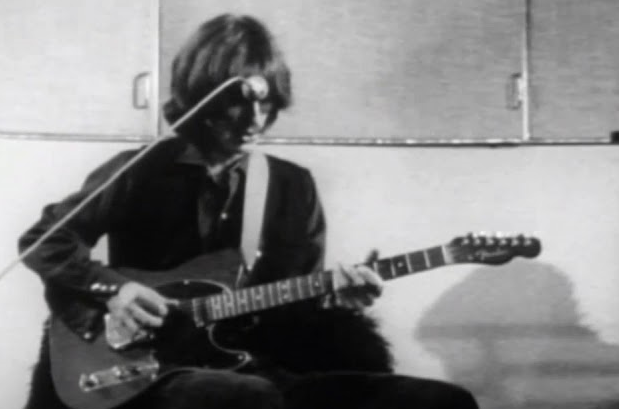 It may have been a Lennon-McCartney thing when writing the bulk Beatles’ discography, but it was George Harrison, the coolest and the greatest among the Beatles, who gave harmonies and matured sound for the band’s music. We look back at the 5 Guitar Solos From George Harrison:

George used his “Lucy” 1957, Gibson Les Paul, with a Leslie speaker, and there he managed to get the solo with a turned up the heat on his melody and dynamics, reminding you that he’s one of the greats when it comes to guitar playing.

George Harrison’s amazing backward guitar solo in this Lennon-penned track is one of the best and greatest guitar moments in his history with the Beatles.

3. And Your Bird Can Sing

Written primarily by Lennon, but it became a gem when George Harrison impeccable added his harmony-lead guitar melodies. The song would become an influence later on to southern rock bands such as The Allman Brothers and Lynyrd Skynyrd.

The ironic song to include in the list, but it was indeed one of George Harrison’s greatest guitar moments with the Beatles. The solos that bring the track to its peak and was the fab four’s most powerful statement expressed by George’s guitar.

1. While My Guitar Gently Weeps

Well, this is definitely George Harrison’s signature tunes. He wrote the song in 1968, sadly, the rest of the band didn’t have any interest in the song so he asked the help of his friend, Eric Clapton to sit in on the recording session. And the other three were on their best behavior just by Eric Clapton sitting there, watching them.