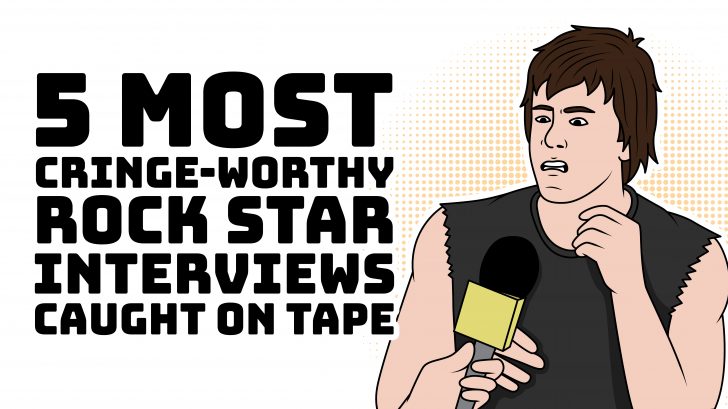 Interviews can be unpredictable at times. Although on the surface interviews can seem like an insider look at getting to know the artists who are being interviewed, it doesn’t always end up that way. There have been incidents when our favorite rock stars, with their notorious attitude and behavior, just get triggered by stupid questions or anything that can tick them off and they lose it — all on camera! Sometimes that’s a good thing for our entertainment pleasure but these awkward interview meltdowns can also make you cringe.

When The Bee Gees appeared on “Clive Anderson All Talk” in 1997, it seemed like everything was set up for disaster even from the get-go. The interview was dragged on with the roasting the band’s sound and fashion sense all throughout. Barry Gibb wasn’t having any of it and proceeds to walks out on the interview, closely followed by his two brothers. The most cringe-worthy moment would be host Clive Anderson’s failed attempt to salvage the show as the singers walk away one by one.

“Should we let her [Courtney Love] come up? No don’t, please”, Madonna begs as a drunk Courtney Love throws items from her makeup bag up at her while being interviewed by Kurt Loder for a post-show segment in 1995. The Hole frontwoman then proceeds to interrupt Madonna’s interview only to criticize the pop super icon’s outfit and accuse her of being mean. Madonna keeps looking away obviously asking with her eyes when this will all be over. A strange and classic television moment that will forever be remembered.

This legendary interview is part of a Bob Dylan documentary Don’t Look Back and was more a whiny rant from the music icon rather than an actual interview with the reporter. Dylan blabbers on, saying

“I don’t need Time magazine. I don’t think I’m a folk singer, but you’ll probably call me a folk singer”. He adds, “Sure, I read it [Time] on the airplanes, but I don’t take it seriously. If I wanted to find out anything I wouldn’t read Time magazine. I’m not gonna read Newsweek. I’m not gonna read any of these magazines. They’ve got too much to lose by printing the truth, you know that.”

The reporter was left speechless and astounded.

Ask terrible, non-sensical questions to a jet-lagged hungover rock singer and you got a recipe for a cringe-worthy live interview. The segment was destined to go downhill just as it started when the interviewer kept saying his guest’s name was “River Weezer”. Seems like he got those names mixed up but Rivers Cuomo didn’t even notice. The entirety of the interview was downright awkward with Cuomo giving no eye contact nor concrete answers at all. Good luck trying to watch without cringeing one bit.

The Sex Pistols’ appearance on the Today show then hosted by Bill Grundy is a possible contender to be declared as one of the most controversial interviews of all time. The interview was filled with inappropriate language and verbal travesty with the band members sneering at Bill Grundy. Siouxsie Sioux teased Bill muttering, “I really wanted to meet you,” prompting Grundy to respond “Let’s meet after, shall we?”. That set off guitarist Steve Jones who then started calling the host a “dirty sod”, “dirty old man”, “dirty bastard”, “dirty f*cker” and “f*cking rotter” all on live television.