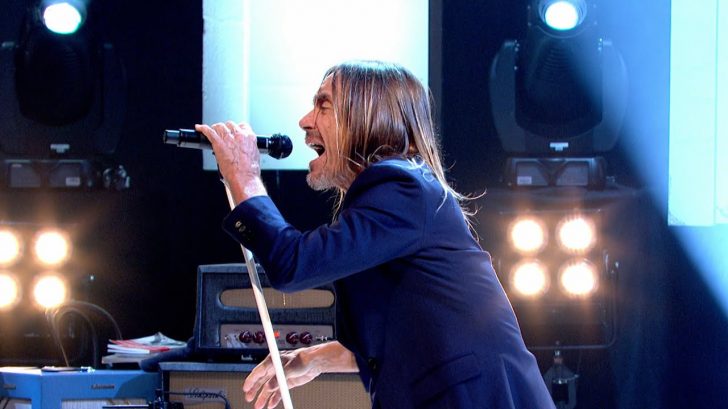 The 74-year-old artist and founder of The Stooges received the Polar Music Prize 2022 in February, a recognition of Swedish origin that has been compared to the Nobel Prize. What has Iggy Pop done to go from being, shortly after starting his career, a social jerk, one of those musicians whose obituary the newspapers had already written due to his massive substance use, to being one of the great pop personalities of today, a coveted advertisement man, a fashion icon, and a sought-after appearance in films by some of the most prestigious filmmakers of our time? We look back at the 5 Of Iggy Pop’s Wildest and Craziest Career Moments:

This is possibly the most famous tale on the list. Iggy’s habitual usage of illegal substances reportedly took a toll on his health and wellbeing. As The Stooges were closing down in the early 1970s, Iggy booked himself into UCLA’s neuropsychiatric center, hoping to kick his cocaine habit. In 1974, he was in the midst of conquering his reliance when a couple of familiar people appeared with a gift.

“We trooped into the hospital with a load of drugs for him,” David Bowie revealed to Blender in 2002. “He wasn’t well; that’s all we knew. We thought we should bring him some drugs, because he probably hadn’t had any for days!”

The clinic, sensibly, denied the white powder because Pop was recovering from a cocaine habit. Nevertheless, it would be a watershed moment in Iggy’s career, paving the way for the next phase of his professional life.

‘The Murder of a Virgin’ performance

This entry goes above and beyond the call of duty. After The Stooges disbanded in the early 1970s, Iggy Pop relocated to Los Angeles and sought to launch a solo career. On August 11th, 1974, he performed his debut gig at Rodney Bingenheimer’s English Disco on the Sunset Strip, a notorious glam rock hotspot. It was to be a memorable night for all the bad purposes.

He titled the show The Murder of a Virgin, and then before long, Pop addressed the audience, “Do you want to see blood? “, who unequivocally answered his query. The frontman then demanded that the guitarist, Ron Asheton, who’d been dressed in full Nazi regalia, whip him continuously.

However, things deteriorated further. Iggy reportedly began yelling racial obscenities at a black audience in the hopes that he would retaliate by stabbing him with the steak knife he’d smuggled on stage. Pop, thankfully, did not obtain what he desired from this heinous behavior but instead succumbed to cutting the symbol ‘X’ into his own blood-soaked chest.

Elton John in a Gorilla costume freaks him out.

This is an instance of Iggy Pop’s drug consumption taking its toll. Pop was well-known for his fearlessness in the face of anybody. Regardless, the Muskegon, Michigan, native’s ruse was challenged one evening in 1973, before a Stooges gig in Atlanta, Georgia, but in the most unusual of circumstances.

Iggy was in another dimension, so intoxicated on quaaludes that he passed out in the bushes near the Days Inn, but he managed to hit some speed and regain his stamina in time making it onstage. Unfortunately, in the middle of the performance, he was confronted by Elton John dressed as a Gorilla, which caused him to panic again and ends up losing it entirely. He believed he was having a nightmare, but it wasn’t. l. “I was like, ‘Oh my god! What can I do?’” Pop remembered in Please Kill Me. “I couldn’t fight him. I could barely stand.”

Splashing blood all over the crowd

This is yet another horrific one from the days shortly after the release of Raw Power. The group was on a four-night stint at New York’s spot to be, Max’s Kansas City, on July 31st, 1973. As The Stooges singer ascended through the audience, a chair collapsed below him, sending a complete tray of glasses shattering into the floor.

He tumbled on them, and being the irresistible juggernaut that he is, he swiftly stood up, slashed from head to toe, and continued his performance. Despite the efforts of everyone around him to stop him, Iggy made what is possibly the most terrifying decision of his career. He wrenched his body at an angle, spitting blood into the crowd.

The first effort to bind the cut with duct tape failed badly, but fortunately, Iggy’s old friend, Alice Cooper, was present to transport him to the emergency.

Pukes all over the place, then lays his manhood on an amp.

This is another nasty one, this time from August 1970. Among those in attendance at this iconic Ungano event were Alan Vega of Suicide and jazz legend Miles Davis, but this didn’t deter the unflustered Iggy Pop, who continued to do his old stunts. Pop gushed everywhere as he approached the mic to perform, a consequence of the narcotics he was taking.

Following that, he apparently drew out his manhood and placed it atop an amplifier, much to the crowd’s surprise and awe. This trifecta of insanity was concluded when Pop approached Andy Warhol starlet Geri Miller, grasped her by the face, and pulled her and her metal chair all over the spew-covered floor. It’s incredibly scary.