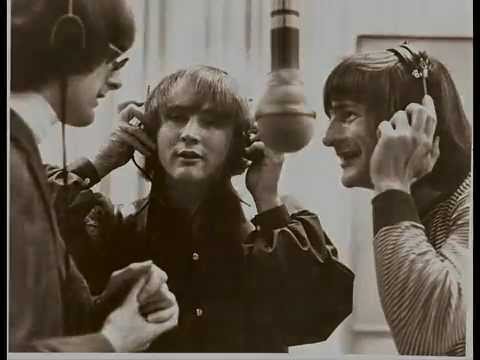 The Byrds, are one of the best rock groups of the mid-1960s, and pioneers in the musical genre of Folk Rock, psychedelic rock, and country-rock, regarded as the American response to the British invasion spearheaded by the Beatles.

In January 1991, The Byrds were inducted into the Rock and Roll Hall of Fame, the occasion that the original five members were seen performing together for the last time. Today, McGuinn, Crosby, Hillman are still active, but Gene Clark died of a heart attack in 1991, and Michael Clarke died of liver failure in 1993.

The Winnebago Camper in which The Byrds traveled, a rudimentary van-caravan rented for their tour at the end of 1965, a crucial year in the mutation of the global pop sound, increasingly decentralized in its influences, was a washing machine continuously spinning with the sounds Ravi Shankar’s retro avant-garde and especially John Coltrane’s still recent work, looping through a rudimentary but effective sound system: a cassette tape recorder connected to a Fender amp, bumping into the potholes in his makeshift home. rolling.

“Here, take this to McGuinn and tell him to write something decent for your fucking movie,” an already fed up Bob Dylan must have snapped at Peter Fonda, giving up after enduring his insistent brawls over and over again to get scratched on a subject destined for the soundtrack to his recently edited debut feature ‘Easy Rider’ (to the Minnesota singer-songwriter the ending seemed like a fraud and refused to give them songs), while he slid the stained paper napkin, say, of stands of daisies and micheladas, in which he had just scribbled the opening verses of what would become ‘Ballad Of Easy Rider’; a simplistic but effective haiku translated in our country by the SolyNieve Expert Group such that: “The river flows, It flows to the sea / Wherever that river goes, That’s where I want to be.”

The Byrds’ conscious nod to director Stanley Kubrick and his comedy Noire ‘Red Telephone, We Fly To Moscow’ (‘Dr. Strangelove’, 1964), which ends with Vera Lynn’s original interpretation of this radio classic rooted in the British collective subconscious, with which young combatants said goodbye to their families during World War II. The BBC included it in its programming of emergency broadcasts, canned ad hoc to have at least a forecast of one hundred days of service, in the hypothetical case that the nuclear catastrophe were unleashed on the Thames; This last fact underlines the bad temper of the director of ‘Lolita’ by choosing it as the sound background in the succession of real atomic mushrooms, which explode in rhythm with the melody in a kind of macabre waltz in the last sequence of the film.

An endearing character from bassist Chris Hillman’s childhood was the starting point for this delightful baroque country-pop composition in the vein of the Beach Boys’ naive tale ‘Sloop John B.’. In the opinion of the writer, one of the peaks of the career of a group was already reduced to a trio after the expulsion of David Crosby, the band’s official ballplayer since its inception. He would never recover from his dismissal, and sadly the group would be forever denied in its creative brilliance, never again reaching similar levels of creativity and fantasy.

Roger McGuinn sings to the Universe with his soul wide open, chanting with his voice numb from his cosmic vantage point, preaching his particular vision of Einstein’s theory of relativity, in this bizarre marvel that borders the New Age in the lyrical, but that assimilates like never the melodic tics of his admired Dylan.