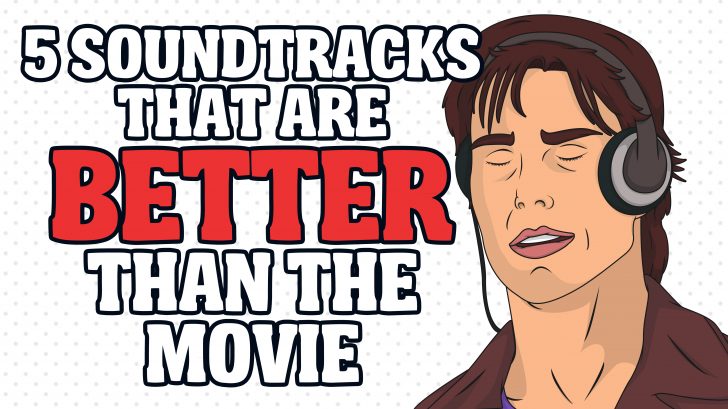 There are movies that make you want to take back the last 60 minutes of your life and more just so you can never set eyes on it again – a total waste of time, basically. But in some cases, they have one redeeming quality – the soundtrack. If it weren’t for the songs, we would’ve sorely wished the films never existed because they’re either mediocre or absolute garbage.

Luckily for them, someone knew which songs to pick. We’re willing to forgive some of them because of that. Besides, we may not be experts in movies but we know how important the right music is especially when it comes to making unforgettable scenes. Case in point: it’s hard to listen to Steppenwolf’s “Born to be Wild” without conjuring up images from “Easy Rider.”

“Purple Rain” the song is nothing short of an epic masterpiece but the movie, well, not so much. The latter is a rock musical drama which stars, who else, Prince. It was his debut film and he played the character of a young musician trying to deal with abuse at home, romance, a rival singer and problems within his own band.

We love Prince but the plot here is shall we say, a bit ludicrous. In fact, it’s actually best to think of it as an extremely long music video. That way, you won’t feel as though you just threw away your precious time.

“He [Prince] said, “What about the music?” I said, “We want at least 12 songs. Do you want a double album?” He said he didn’t but that he had about 100 songs and they were all ready to go.” – Purple Rain Director Albert Magnoli

But the soundtrack is another story. Basically, the weak script’s saving grace was the songs. The album is unforgettable to say the least, and features some of Prince’s finest musical moments.

“I Am Sam” follows the story of a mentally handicapped father (Sean Penn) fighting for custody for his daughter (Dakota Fanning). He is obsessed with the music of The Beatles and in fact, named her Lucy Diamond after one of The Fab Four’s most legendary hits.

The actors’ performance was compelling but overall, the script was way too cheesy and tacky. The writing gets sappier the longer you watch. But it’s not “the worst movie of all time” because we can think of five films deserving of that title.

“Getting Eddie was the lynchpin to everything. He’s friends with Sean [Penn]. He gives you such unbelievable artistic credibility.” – Producer Rick Solomon

The soundtrack features covers of The Beatles classic hits. According to Solomon, they received the blessing of Paul McCartney and Yoko Ono. We know there are hundreds of cover versions but several here are too good to pass up like Eddie Vedder’s rendition of “You’ve Got to Hide Your Love Away.”

Retitled “Pirate Radio,” this is a film about a group of rogue and eclectic DJs who stood up to the British government by playing generation-defining pop and rock songs instead of classical music. The plot sounds interesting enough but when you actually watch it, it’s disappointing even for a comedy movie.

Some say it didn’t do justice to the rich catalog of stellar classic rock songs on its soundtrack and we’re inclined to agree.

“This is a tremendously entertaining set that does a good job of balancing the very familiar (“I Can See for Miles,” “The Letter,” “Crimson and Clover,” “My Generation,” etc.) with some left-field choices like “Yesterday Man,” “I’ve Been a Bad Boy,” and “The Happening.”” – AllMusic’s Stephen Thomas Erlewine

From The Beach Boys’ “Wouldn’t It Be Nice” and The Who’s “I Can See for Miles” to The Kinks’ “Sunny Afternoon” and David Bowie’s “Let’s Dance,” it’s effective in bringing out your nostalgia but apart from that, the movie barely has anything to offer.

It’s Tom Cruise so this should be good, right? Well not exactly. Director Cameron Crowe is the creative genius behind “Almost Famous” so you can’t really fault us for having high expectations. “Vanilla Sky” was a let-down, however.

Crowe had some experience in musical journalism and he used to be a contributing editor at the Rolling Stone magazine so it goes without saying, the soundtrack is something we looked forward to. Besides, his then-wife was Heart’s Nancy Wilson so…

“In the days after completing Almost Famous, the opportunity to keep our film-making team together was too attractive to pass up.” – Cameron Crowe

“Vanilla Sky” is just underwhelming but the music is stellar. From Bob Dylan’s “4th Time Around” to Peter Gabriel’s “Solsbury Hill” – we could put it on loop every day. Also, Crowe somehow had enough convincing powers to make Paul McCartney record the title track. That’s a pretty awesome feat.

This follows the story of France’s iconic queen Marie Antoinette from her betrothal at 15 to the French revolution. The movie bagged the Academy Award for Best Costume Design because the costume is the only other thing we liked about it in addition to the songs used.

It’s amusing at times but for the most part, it’s just boring and dull. There’s a lot of fluff and no real substance. Thank god it was saved by the music. From The Strokes “What Ever Happened?” to The Cure’s “Plainsong,” it’s no wonder why the soundtrack is considered a classic.

“In fact, its mix of new wave, post-punk, dream pop, electronica, and classical pieces really sells Sofia Coppola’s vision of Marie Antoinette as an innocent young girl, transformed into her era’s version of a hipster fashionista, who gets in way over (and ultimately loses) her head.” – AllMusic’s Heather Phares

The director might have missed the opportunity to create something majestic and epic but then again, people will most likely remember the soundtrack and therefore be ready to forgive any historical inaccuracies in the film.