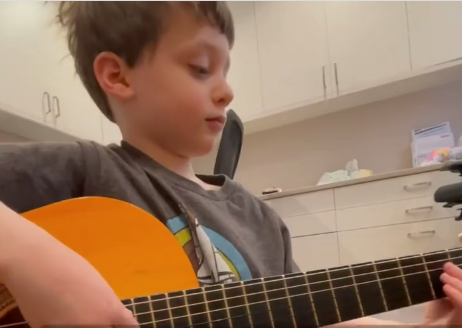 Only 5 years. Yes, 5 years old is Miles Bonham, the child prodigy who has learned to play “Stairway to Heaven” by Led Zeppelin. And the news is not only that this song has been learned from the British band, but that it has been done directly by ear. It’s pretty clear that Miles is no ordinary kid and has a real gift for music. This is how little Miles plays the song.

His name on Instagram is @milesmusickid, and there he plays almost every instrument he has been able to get his hands on in the short time he has. From the guitar to the piano through the drums or the ukulele. And if that’s not enough, he also produces his own music. And I repeat it in case it has not been clear, he is only 5 years old. And all this, obviously, has had a great impact on social networks. On his Instagram account, he has more than 300,000 followers and adds 11,000 followers on his YouTube channel.

And, how could it be otherwise, in addition to playing all these instruments, Miles knows how to sing. One of the most viral videos that Bonham has already had more than 6,000 likes and almost 100,000 visits. Let’s not think that his range is closed only to Rock since he can sing any genre like when he does it with songs by Billie Elish and Mark Morrison.

It is quite difficult for us to find the ceiling for little Miles, who is conquering the whole world with this innate ability in which, a song he listens to, a song he replicates perfectly. We’ll keep an eye on him to see what musical paths he goes in the next few years and hope he follows in the footsteps of Gun N Roses or, of course, Led Zeppelin with this “Stairway To Heaven.”