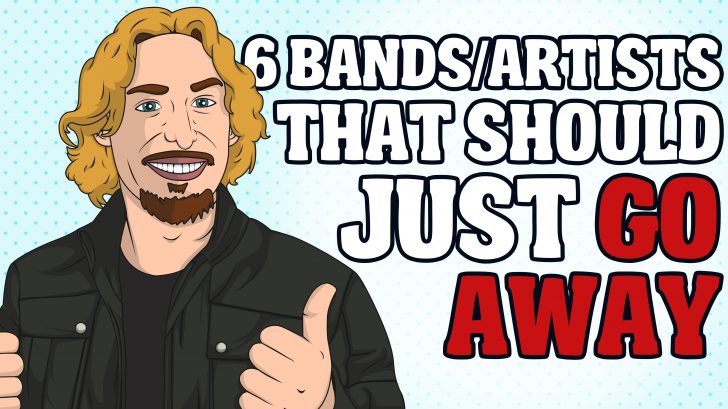 Sometimes, music gods play a cruel joke on us by giving us artists we don’t want to hear about ever again. You know those lazy days when you just want to lounge in your couch and watch TV all day long? Well, the people on this list can energize you enough to want to turn off the TV… or radio… maybe both.

Seeing them on your feed ruins your day and you can’t help but wonder why they’re still around. Also, we don’t know if we’d be impressed with those who can stand their music and actually enjoy them. It makes you think they’re in a parallel universe where awful songs are the trend.

Okay so there are those with great tunes but that doesn’t mean they should not fade into non-existence. They had their glory days and they’ve enjoyed their fame. Time to give it a rest.

P.S. You’re about to be subjected to a wide array of emotions (anger, disbelief, frustration, annoyance) – none of which are pleasant.

For the record, they had great songs. At their peak, they were churning out one amazing track after another. They’ve won multiple Grammy Awards and had more than 30 million album copies sold. The vocalist Natalie Maines has some golden pipes too. They sold out stadiums and well, good for them.

But then they covered Beyoncé’s song “Daddy Lessons” and even performed live with her and we’re not exactly huge fans of that. They were country icons so that collaboration left us confused. We’re not the only ones left unimpressed.

“What sucks is where people’s opinions used to be a truer opinion about our music, now it feels tainted. If someone hates it, it’s probably because they hate me politically. So the judgment of it just isn’t as honest and pure as it used to be.” – Natalie Maines

Well politics aside, we’d love to remember them as influential figures in country, not artists foraying into pop just because.

Bono gets a lot of hate on a regular basis and U2 is often tagged as one of the most overrated bands of all time. Sometimes, you have to wonder if they’re that insensitive or they just chose to ignore people because of* ka-ching, ka-ching.*

They just released their fourteenth studio album earlier this month and NME’s Mark Beaumont was spot on when he reviewed it and wrote that U2 were “old masters at pomping up whatever the kids are buying.”

“It was good if a song took you on a journey or made you think your hifi was broken, bad if it reminded you of recording studios or U2 …” – Brian Eno

They may not be the worst rock band there is but they’re certainly far from being the greatest. They’re massively over-hyped and we wouldn’t mind not hearing about them in the next fifty years. They had their glory days but now, their music is just horrible.

Once upon a time, KISS was tolerable and entertaining. Now, they’re inescapable and they’re like mushrooms popping up everywhere – case in point, Gene Simmons and Paul Stanley’s cameo in the comedy film “Why Him?”

And it doesn’t help that Gene seems to think that the only way to remain relevant is by doing things he knows will make people hate him more – like attempting to trademark the devil horns OR selling $50,000 boxed sets.

“The truth is, the world can exist pretty easily without you. The only way you become important is if you make yourself important.” – Gene Simmons

We don’t like calling anyone sellouts but with KISS at this point, that’s pretty much a universal fact. Besides, they’re practically selling everything from lunch boxes to coffins with their name on it. To be fair to Gene though, he’s honest about it. Still, the world would be a much peaceful place if KISS just took their millions with them and lived in seclusion.

When we heard that Canadian police punish drunk drivers by forcing them to listen to Nickelback as they get hauled to jail, we laughed out loud until we realized that was actually a cruel way to torture someone. You see, they’re big sellouts and it’s embarrassing for rock fans that they refer to themselves as a rock band.

It’s also interesting to know WHY people hate them so much that one PhD student at the University of Eastern Finland, Salli Anttonen conducted a study about it. She wrote:

“Nickelback is too much of everything to be enough of something. They follow genre expectations too well, which is seen as empty imitation, but also not well enough, which is read as commercial tactics and as a lack of a stable and sincere identity.”

Do you agree? Whether you said YES or No, the point here is, nobody will miss Nickelback if they fall off the face of the earth.

Would you believe there was a time Kanye West made good music and was actually not a douche? We know it seems highly unlikely but if you scour the internet and look for clips of his interviews from way back, he wasn’t that bad.

He seemed like the cool, chill guy you want to hang out with. Fast forward to today and he is the biggest jerk on the planet.

“More people need to know that they’re not f—ing cool. In today’s world, having money has allowed people who are extremely uncool to think that they’re cool and carry it like that.” – Kanye West

Maybe he’s creative – well, he did manage to collaborate with Adidas for his YEEZY shoes and even started his own clothing line where he sells a destroyed sweater for $2,260. But more than his overpriced, overhyped items, we see him on the news because of his infamous rants – remember when he asked Mark Zuckerberg to give him a billion dollars?

It’s always a good day when we don’t hear anything from him.

Thanks to rap music, you don’t really need some serious talent to make it big. You can say the most random words that make no sense and as long as you have a nice beat, it would likely be a huge hit. Check out the following lines and if you can decipher what they mean, please let us know:

Timbaland:
“There’s no need to lie folk, Why you sleepin’ wit ya eyes closed?”
Drake:
“Got so many chains they call me Chaining Tatum.”
Dr. Dre:
“Never let me slip, cause if I slip, then I’m slippin.”
MIMS:
“I’m hot cause I’m fly, you ain’t cause you not.”

Rap probably has only one rule: it needs to rhyme. It doesn’t have to make sense, it doesn’t even have to be a word from the dictionary. And while there are talented rappers, most of them just jump on the bandwagon.

Remember Rush’s brief foray into rap? Yeah, we want to forget that one too.