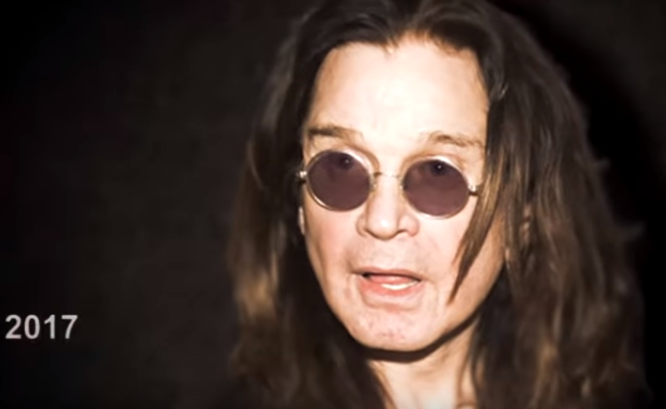 The history of music in general and of rock in particular is full of tragic deaths resulting from the abusive and uncontrolled use of all kinds of addictive substances. Too many talents have fallen by the wayside, not being able to break out of that happy spiral that ends up engulfing those who don’t realize in time that this dangerous flirtation usually has no turning back. Unless you’re Keith Richards, of course.

Ozzy Osbourne’s memoirs (Birmingham, United Kingdom, 1948), I am Ozzy, are considered to be among the craziest in rock, mainly due to their unclassifiable and unquantifiable excesses of all kinds. Surprisingly, when the rocker was closest to death, it was in an accident he suffered in 2003 with a quad (four-wheeled vehicle similar to a motorcycle) that he was driving. “The doctors told me that I was dead for some time,” the singer said.

After overturning, it fell on him, breaking his neck, clavicle and eight ribs. His lungs flooded and he was breathless and pulseless for just over a minute, his wife Sharon later revealed, adding that he was revived by his personal bodyguard.

The Depeche Mode singer claims he was clinically dead for two minutes from an overdose in 1996, in a room at the famous Sunset Marquis Hotel in Los Angeles.

He told Q: “All I saw and all I felt at first was complete darkness. I’ve never been in a space that was blacker, and I remember feeling that whatever it was I was doing, it was really wrong. Then the next thing I remember was seeing myself on the floor, on the steps outside my hotel bathroom, and there was a lot of activity going on around me… In some ways, it was very liberating. Then I came to and a cop was handcuffing me. It certainly wasn’t a place I’d like to visit again.”

Now he assures that he is calmer, but the Guns N’Roses guitarist knows well what it is to cross the line. A very excessive episode in Slash’s life took place on September 24, 1992, when after a concert at Oakland Stadium, he had a good time with his friends.

He told The Guardian in 2004: “The one where I died in San Francisco? I remember exactly what happened. These drug dealers came to my hotel room at 5 am. They had everything and I took all of it. I started down the hallway and I ran into a maid, and I asked where the elevator was and then bam! I collapsed. Little Spanish lady, it freaked her out. When you overdose, there’s a certain kind of scene where everybody is just moving really quickly and there’s noise from radios and everything; I’ve experienced it a bunch of times. They took me to the hospital but I said, ‘I’m fine’, signed myself out, went back to the hotel and we flew to the next gig.”

In full swing of the eighties, on December 23, 1987, the Mötley Crüe bassist Nikki Sixx ran around Los Angeles with friends like Robbin Crosby, Slash (of course) and “some of Megadeth”, as he himself tells in the choral autobiography of his band, The Dirty Rags. In his eagerness to perpetuate the party, he passed, of course.

Sixx’s heart stopped for 2 minutes, but one of the attending paramedics administered him a dose of adrenalin, which restarted his heartbeat. The group had just published their legendary record Girls Girls Girls during that period, and they believed they were unstoppable, however this experience brought them back to earth. This reportedly prompted their crowd favorite ‘Kickstart My Heart’ from 1989’s appropriately titled Dr. Feelgood.

The drummer of the English glam rock group Slade was enjoying the good times in the summer of 1973 when, after leaving a party where he had been drinking, he had a terrible accident with his brand new Bentley in which his girlfriend died on the spot. He was taken to Wolverhampton Royal Hospital by an ambulance called by two nurses who providentially dropped by.

Don Powell spent the next six days in a coma, his heart stopping twice. Doctors had to drill holes into his skull to relieve pressure on his brain as they fought to save his life. As if that were not enough, his arms, legs and ribs were also broken.

“I was there for quite a while before anyone told me what had happened,” he said in his memoir. “When I didn’t have the tubes anymore, I got to the toilet. Afterwards, I washed my hands and came to look in the mirror. I had no hair, my face was all smashed, with black eyes and teeth missing and that big crack in the head, held together by clamps. I was so shocked that I fell into the back wall. It was terrible. I thought, somebody has got to tell me what’s going on. I kept asking, ‘Please, tell me what has happened!’”

At the time of Pantera’s greatest commercial success and popularity after releasing the albums Far beyond driven (1994) and The great southern trendkill (1995), its vocalist Phil Anselmo suffered an overdose. It was in the dressing room of the Starplex Arena in Dallas (Texas), on July 13, 1996. Right there he was declared clinically dead for almost five minutes, after going into cardiorespiratory arrest.