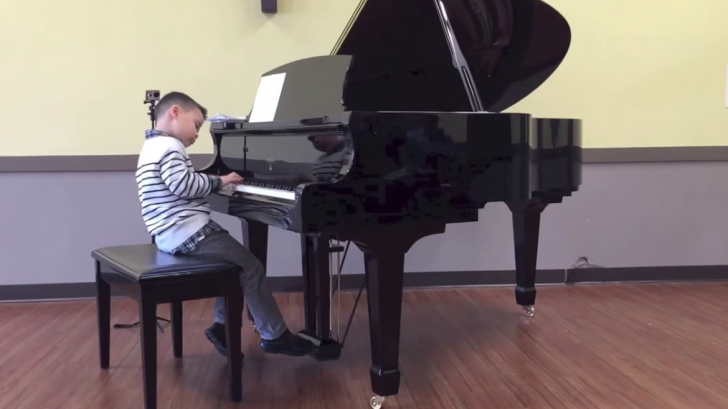 He Can Barely Reach The Petals!

Caiden Mooney is the real definition of a child prodigy. While most of us were dressed up as snowflakes during our winter recitals, Mooney covered Yes’ piano riff in “South Side of The Sky”. What’s mind blowing about this boy is that Yes bandmates retired from playing this song for 30 years because they did not believe that they had the talent to play it as it was intended. WHAT! In a 2016 interview Yes vocalist Jon Anderson says, “For instance, South Side Of The Sky – we’ve learned now how to project that best,” regarding the re- emergence of the song for a 2017 tour. Little Mooney is obviously passionate about playing the piano, and that is evident in the effortless movement of his tiny little hands across the length of the piano keys. Because he can play so well, that means he can also read sheet music. That brings me to the point that this little man to be has an array of talents most people only dream about. Caiden Mooney is either a genius or has the best parents ever- but probably BOTH.

Progressive rock is known to be among the more complicated and difficult genres of music to learn. So imagine being Caiden Mooney and learning to sing “The Wheels on The Bus” then deciding progressive rock piano is the next best choice. The band is among the originating pioneers of the rock genre and have been covered countless times by professional musicians who see Yes’ sheet music as a CHALLENGE. There are millions of stellar covers by children taking on epic rock songs- but this kid is in the same category as Mozart. Remember, Caiden Mooney is 6 years old and already mastering intense soloistic piano riffs. The little boy is incredibly lucky to have supporting people in his life to help cultivate his passion and talent at a very early stage, of what will inevitably be a budding music career. Caiden Mooney is only starting with winter music recitals but it is certain that one day his fans will include Jon Anderson and Rick Wakeman themselves.