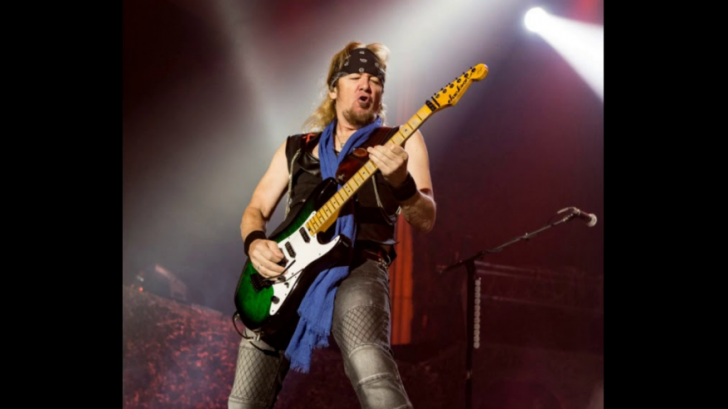 Adrian Smith is the Iron Maiden’s overshadowed guitarist, he is often less-thought when it comes to songwriting — Steve Harris and Bruce Dickinson grab that title, which is true of course, as they have written most of their songs, but Adrian Smith is the songwriter they need when things are falling apart for them. He’s the man who put together all the Iron Maiden’s punchy metal anthems. Below are the 7 evidence Maiden classics that Smith helped to write.

Iron Maiden can get heavy when they wanted to, but with Stranger In A Stranger Land, they made a different approach. The sound is so different from what we were used to – they incorporated synthesizers combining it with heavy metal.

The Wicker Man signaled the greatest comeback in the history of heavy metal. Bruce Dickinson and Adrian Smith returned with a bombastic track The Wicker Man launching it with their 2000’s new album Brave New World released in May 2000.

When Iron Maiden released this track, they insanely surprised everyone by bursting the UK singles chart peaking at No. 3 in March 1988. Included on their album, Seventh Son Of A Seventh Son — and it was surely a madness as they enjoy their huge success.

The first single from the album Piece Of Mind album released in 1983. Featuring drummer, Nicko McBrain replacing Clive Burr. Adrian Smith seems to be fascinated with Greek Mythology, as he based the song on the Greek myth of Icarus — as the title suggests.

Most of the lines from this song were taken from Marcus Antonius’s speech in Shakespeare’s Julius Caesar. Included on the album, Seventh Son Of A Seventh Son and was released as a single in the summer of 1988 peaking the U.K. chart at No.5

Anti-War protest song – 2 Minutes To Midnight will you hit you hard. Essentially, this is Iron Maiden’s War Pigs, but no matter what, this is a classic Iron Maiden anthem, through and through.

The radio-friendly anthem that Adrian Smith able to write in 1986 and the number one song on our list. Many Maiden fans have considered, The Trooper, Run To The Hill, Hallowed Be Thy Name, or The Number Of The Beast to be the trademark sound, but that truth is for, Waster Years. It’s Adrian Smith’s greatest contribution to Iron Maiden’s huge success.