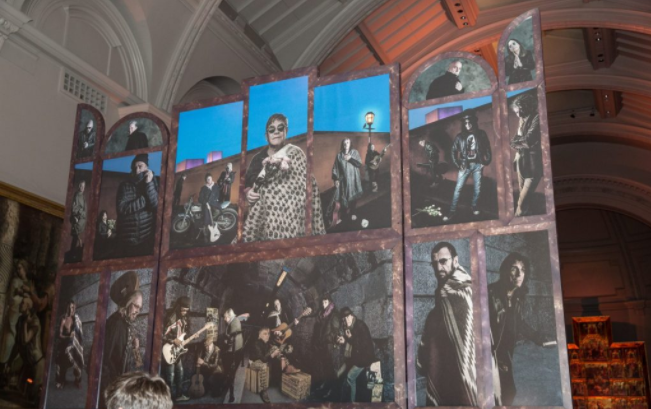 A LEGENDARY WORK OF ART!

A night to remember for these 70 Legendary Musicians who unite to create an explosive Legacy Photography Artwork!

It’s nearly impossible to overstate the awesomeness of the artwork. Alistair Morrison a well-known British Photographer and Roger Daltrey of The Who joined forces to present one of the world’s most prized photographs called “The Adoration – Searching For Apollo.”

The beauty of the artwork was displayed, at a gala reception attended by many guests and by musicians who participated in the Raphael Room of London’s Victoria & Albert Museum last November 13, 2017.

Daltrey and Morrison were responsible for this historical photographs. Inviting a stellar group of great rock legends to have the photo shoot was something unexpected. The prestigious artwork was created for a purpose in which aims to support Daltrey’s charities for “Teenage Cancer Trust” and “Teen Cancer America.”

The Adoration – Searching For Apollo, unfolds the unique legacy photograph featuring over 70 legendary rock musicians of the past decades as street buskers,  a unique insight of one the best art creation of this century. The title derives from the Spanish “Buscar” meaning “Searching for” and Apollo being the God of Culture, art, and music.

“My very first published photographs were a series of portraits of London buskers so, as part of my legacy as an artist, it seemed fitting to photograph these legendary musicians in a way that symbolised their musical roots. I have been delighted with the support received from so many musicians who understand the poignancy of gathering together in a historical image of this scale, at this point in their lives. Within the art piece, we also honour 140 musicians who sadly aren’t with us anymore. Through this endeavour, and with the help of Maddox Gallery, Mayfair who is handing the art piece, we’ve been able to raise further awareness, as well as funds, around these two fantastic charities, Teen Cancer America and Teenage Cancer Trust.” – Alistair Morrison