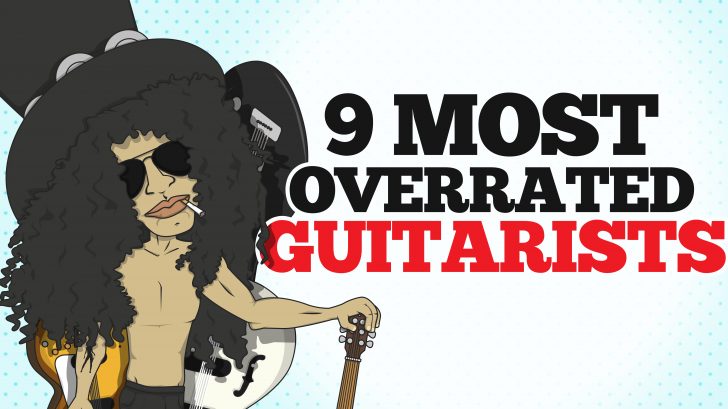 We are not trying to impose that everyone on this list is not a great guitar player or rather a great musician. Let’s not forget to remember that every guitarist on this list have brought us the joy of music. What makes this guitar player overrated is their popularity without knowing their limits. Everyone has their limits, but anyone can turn that limits into something. Yeah, of course, everything today is overrated. Even the great ones are now overrated. But as childish as this gets, every person has its own opinion. Making no mistake, that this list is something serious. Taking all that into account, we present to you the 9 Most Overrated Guitarists without any form of bias…

Clapton? Overrated? Get out of here…!

Eric Clapton surely is one of the great guitar players in history, but the hype has to end… Yeahh. Clapton has always been that good……… but noooottt that great….., not lately..

He’s now becoming the definition of an “Amazing Guitarist”, somehow, in the most what? how do I say this? Ahhh.. Yeeaahh in the most excruciatingly booorrrrriiiinggg waayyy… His guitar solos lately are so easy to copy, if you’re somewhat a skilled guitar player, you’ll know what I’m trying to say here….

Where are all this hype coming from? Maybe because Eric Clapton still continues to perform all around the world (and that’s epic!!!) for different events, such as Crossroads Guitar Festival.

That’s how you will recognize U2’s guitarist “The Edge”, effects here, the effects there, the effects everywhere.. And it’s becoming tooo much… What happen to the old fashion way of playing the guitar where the only effect you can put with your guitar playing is the soul….

I guess, that’s his job playing for one of the biggest band, and maybe that’s the architecture and design of their music.

Playing for the great “Ozzy Osbourne” has become such an honor for Zakk Wylde and the greatest peak of his success including Black Label Society. But his guitar playing skills have not gone to an extent of any higher level, his technicality are impressive but are they enjoyable??

And yesss,, you might even ask yourself if you’ll ever be as good as Zakk Wylde….,but don’t lose hope, you can always be as good as his guitar playing stance, just grow your hair that long and be as badass as he looks, the way he waves his hair and bang his head and everything…

In the early days of Santana’s career, you can definitely say that he can play the guitar.

But aren’t you all tired of hearing the same sound and tune over and over again… That became quite a Santana’s thing. “Nothing new” And will get you bored in a second. It’s kinda confusing of how someone great lost his touch and no matter how successful he became, there’s no more special and creativeness in his music.

And yet, Rolling Stone listed Carlos Santana as the 20th greatest guitar player of all time. That seems a little bit off, don’t you think?

The definition of overrated would be Keith Richards, as he plays for one of the most “also” overrated band of all time, The Rolling Stones.

There’s no doubt that Keith can produce blues solos, but he never really became great at it after all. Talk about the most influential guitar players in the world today and Keith Richards is not one of them because of the reason he never really did any unforgettable guitar solos that much as possible.

You all definitely want to have this guy’s hat!!!

One of the coolest rock and roll guitar player of all time!  And some may refer to him as The Guitar God or a Guitar Hero! But Slash is always Slash, he never tried to be anyone else, and that’s what makes him great!!!

But as this list goes on… Slash, “Overrated”…  sounding no different just like the rest of the guys here on the list.. Yeaahh! The guy can absolutely give you a hell of a show something that you might even never forget, and that is great and all…

This has to stop!

Surely “Metallica” has changed metal forever and became one of the most respectable band in the history of music.

James Hetfield don’t call him “The Reaper” for nothing cause Kirk can really kick your ass with those killer riffs! But Kirk Hammett’s overused of the “waaah” sound effects has become so tiring. Yeaaaahhh sure, that’s his signature… But is there nothing new, do we really have to hear that “waaaaahh” sound every time they release a single or a new album.

We can all hope that he can come up with something new, something different that would be catchy in the ears. With a little bit of melody and a heavy tune to it, and change all that “waaaahh” sound into a “wiiiiiiiihhh” sooouunddd…

No doubt for Jack White here, he surely is an incredible musician. But how did this happen that an incredible one became highly overrated as his career goes on? It seems that Jack White has been turning stuff into something …….. “Disappointing”.

Rock and Roll favorite son has made some great music, yeaaahh… “Some”. That’s right, you will either love or hate him by the fact that all of his projects sound every bit of similar.

Maybe that became a Jack White’s thing, lack of soul and will get you bored in no time….

This is a tough one and probably too easy… Huuhh? What’s going on?

If Kurt Cobain is still breathing today, he’ll probably list himself as one of the most overrated guitar player.

His reputation goes on as one of the legendary frontman of the grunge era, and the band called Nirvana.  Cobain is pretty much a talented musician, that’s for sure. But there’s no debating here, the guy is no maestro on the guitar.

There’s nothing more to suggest here, he probably would not want to here, anyway….