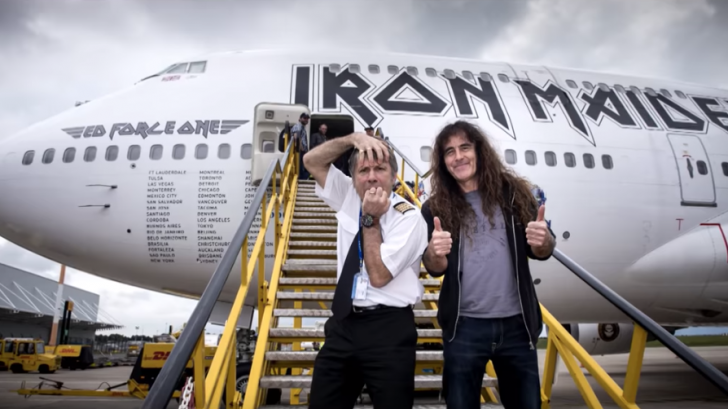 Most bands are flown all over the world in private jets… but Iron Maiden is not one of those bands. You see, they’re kinda bad ass so it wouldn’t make sense to have someone chauffeur them around the skies. No. In the years 2008 and 2009 the heavy metal band were being transported in an Astraeus Airlines Boeing 757. The aircraft wasn’t quite getting the job done so Iron Maiden had the plane configured into a combi so that their crew, instruments, and the band could reach destinations that weren’t logistically possible, with the previous aircraft.

So Iron Maiden’s new plane is much bigger than their previous Boeing 757 and 747. The new jet is named “Ed Force One,” and has Eddie painted across the side along with adopted artwork from The Final Frontier album. Front man, Bruce Dickinson pilots the plane. He beams with joy when he is interviewed about “the big bird.”

While he was pilot for Ed Force One, Bruce Dickinson had talked about the convenience of flying to all of Iron Maiden’s tour spots, “Honestly, it’s such a beautiful aeroplane. It allows us to do a European itinerary on an inter-continental basis. It’s our time machine, our magic carpet.” Unfortunately, there was a crash during their Chile tour date at the airport. The crash required that 2 replacement engines be mended onto Ed Force One. Crews worked 24 hours a day to get the plane cleared by Chilean Customs. Once the final  jigsaw was fitted onto the “heavy metal” plane, it was good to fly!

Ed Force One rocked the hell out of the skies before it landed for good. Dickinson retired from flying Iron Maiden’s plane. He had this to say in 2016, “This is my last flight on Ed Force One. Myself and Steve are going down to Gothenburg and when she gets there, she’s going to go back with the Icelandic flight crew onboard to Iceland.” He had flown Iron Maiden’s plane for their entire 2015 international tour, Book of Souls.

Bruce Dickinson had one final thought on stepping down from the pilot’s chair of Ed Force One,

“I’ll miss the big bird but you know what? The show must go on.”

You can check out the inside of the plane, meet the flight crew, and look back at all the tour dates Bruce Dickinson piloted– in the video below!