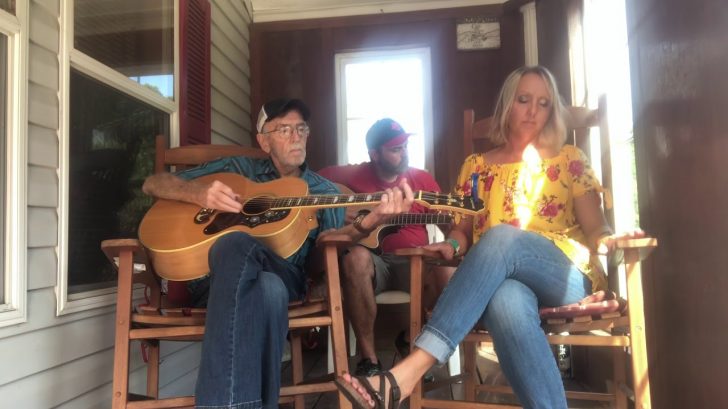 You’ll probably start to tear up a little when you hear this father and daughter duet version of “Will the Circle be Unbroken.” Sadly, that was the final duet they performed together, and the footage was originally shared on Facebook.

The song is a legendary hymn that is played by several incredible musicians. It was initially made well-known by the Carter Family and is now a well-known gospel song to everybody.

“Will the Circle be Unbroken” was sung on their front porch by Angie Sutherland and her father, Edgar Napier. Edgar is seen playing the guitar throughout the performance as his daughter sings the song. It is saddening to learn that Edgar Napier was facing stage 4 cancer and he lost the struggle on August 25, 2019. The two had been sharing a few videos back then, and they became famous for their rendition of “Lord, I Wanna Go To Heaven.”

Watching this performance was a moving experience since you could feel the daughter’s sincere emotions. Her father enjoyed playing the guitar while relaxing in front of their porch. You may watch their previous performances on her Facebook page. They have also performed in various settings.

Music runs in their blood. Angie Sutherland has quite a country vocal style, and her father is a singer-songwriter who can handle the guitar. Prior to covering “Will the Circle Be Unbroken,” the two sang “If I Loved to Be 100,” a song composed by Edgar himself.

Edgar began the song by singing and strumming the guitar. During the chorus, his daughter accompanied him, and their voices complemented each other beautifully. It also conveys the wonderful message that the Almighty loves and cares for us.