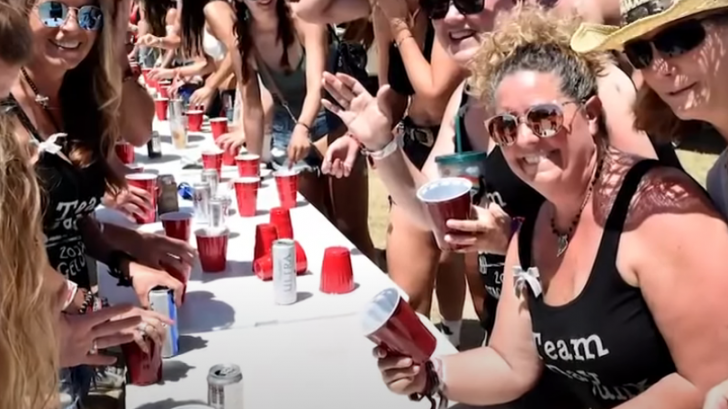 Although we are closely associated with beer consumption in countries such as Germany, the Czech Republic, and even Spain, the United States is one of the most beer-producing countries in the world.

According to reports, Americans drink around 6.3 billion gallons of beer each year, corresponding to nearly 24 billion liters.

Among the most essential industrial brewers in terms of marketing, Anheuser-Busch InBev leads the ranking, far surpassing the rest of the manufacturers with almost half of total sales.

Not in vain, despite the immense variety of proposals, Bud Light is undoubtedly the best-selling beer in the United States, ahead of other leading brands such as Coors Light, from Molson Coors Brewing Company, or Budweiser, also from Anheuser-Busch. InBev.

Also during the celebration of today July 4, Independence Day of the United States is when more beer is consumed throughout the year. For this reason, there is nothing better than touring some of the most beer-producing cities in its territory to celebrate the North American national holiday.

Cincinnati is one of the brewing cities in the entire territory and has a long tradition. The inhabitants adopted the habit of drinking large amounts of beer from German immigrants who settled in a neighborhood “on the other side of the river.” In allusion to the Rhine River in their native Germany, these immigrants began to call the Ohio River in the same way, and thus the name of the neighborhood was born: Over The Rhine, or “on the other side of the Rhine”.

It also has a large number of recent graduates and a loyal following for beer.

On the craft level, Cincinnati has more than a dozen microbreweries, including such interesting local brands as Rhinegeist Brewery, Mt. Carmel Brewing Company, and MadTree.

According to The Chicago Tribune, Saint Louis is to the United States what Prague is to Europe. And not only because of the atmosphere or the music but also because American Budweiser is made in this city.

In 1852, Eberhard Anheuser, a German immigrant who was dedicated to the production of soaps in St. Louis, acquired the Bavarian brewery, which belonged to another compatriot immigrant. Only eight years later did he expand the business with another factory, renaming the company E. Anheuser & Co. The business took its final form in 1861 when Adolphus Busch, Anheuser’s son-in-law, acquired half of the company, giving rise to Anheuser-Busch.

But in addition to this giant, Saint Louis is home to microbreweries that each produce up to a dozen different beers, such as 4 Hands Brewery, Schlafly Bottleworks, and Modern Brewery.

According to CNN in Spanish, Portland is the city in the United States with the most breweries per capita, making it a must-see for all beer lovers. The city has 11 microbreweries for every 100,000 inhabitants.

One of the neighborhoods that concentrate the largest number of these establishments is Novare Res in the Old Port neighborhood. Pioneering breweries like Allagash and innovative breweries like Bissell Brothers, Maine Beer Co., and Liquid Riot can be found there.

Behind Portland on the list of breweries per capita in Asheville. As they explain from Vix, the city is a great idea for beer lovers for two reasons. First, because its price is relatively low compared to other cities in the United States. And secondly, because it has a long tradition of independent craft beer production and concentrates numerous bars dedicated to this drink that are also micro-manufacturers.

One of the more established brands is The Green Man Brewery, with its own microbrewery since 1997, and Dirty Jack’s Tavern, with live music every night.

Wicked Weed Brewing is also a reference for its commitment to unusual beers, such as sour and wild-fermented beers.

There is also All Sevens Brewing, one of the most popular local beers.

Grand Rapids calls itself America’s “Beer City” and according to some reports it lives up to its title.

Brewers like Founders Brewing have put this city on the map with the invaluable help of the 80 or so breweries throughout the area.

Other relevant brands are Brewery Vivant, located in a former funeral home, or The Mitten, formerly a fire station.

The first Massachusetts brewery is said to have sprung up just 17 years after the Pilgrims arrived. Since then, the state leads the craft beer revolution in the country.

As far as Boston is concerned, the city is a specialist in lager beer and more than 50 breweries have been established there, influenced by the immigration of the Irish in the 19th century.

Samuel Adams Boston Lager, from the Boston Beer Company, is made here, a patriotic beer that was born as a tribute to one of the leaders of the struggle for independence from the United States, so there is nothing better than this beer tribute on a day like today. The company is considered the second largest craft brewer in the country, behind Yuengling.

The city’s beer tradition is also felt with the American Craft Beer Fest, the largest celebration of limited production beer on the East Coast that takes place in May and in which more than 600 craft beers participate.

San Francisco is considered the birthplace of the California craft beer boom. Micro and nano breweries reign supreme in the Bay Area, which has become a mecca for beer lovers.

There is the Anchor Brewery, founded in the late 1800s and rescued from almost certain closure in 1965 by beer guru Fritz Maytag. Maytag inspired a new generation of brewmasters who spread throughout the city.