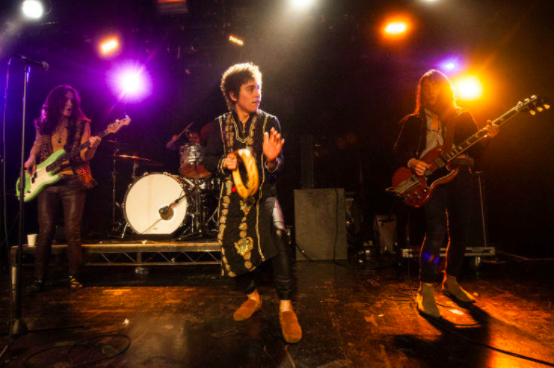 A healthy dose of the new generation of old-school rock

In the age of hip-hop-influenced electro-pop, a young and avidly woke rock band breaks through the surface, bringing with them a fresh take and modern outlook on classic rock n’ roll as a well as an unwavering determination to make rock cool to the kids their age.

Opening up to Rolling Stone, rising rock stars Greta Van Fleet talks about their fairly young career, their musical influences from generations before them, their influence to their own generation, and how they navigate the music industry with their sound and style.

The four young boys of Greta Van Fleet, twins Josh and Jake Kiszka (21), their younger brother Sam (19), and their drummer Danny Wagner (19), are already looking like they’re living the rockstar life – with their shirts unbuttoned to the navel, and their crazy fans following them all around just like groupies back in the day. But when lead singer Josh Kiszka accidentally spilled a bottle of colored pills from his pocket during a live appearance on a Chicago radio show, he was met with shocking stares as it looked like he was already too much in to the life of a rockstar. Turns out, he is not. They pills were, in fact, not drugs, but multivitamins. Two of the band’s members aren’t even old enough to drink yet but the youngsters did point out that they prefer a healthier lifestyle than what is expected of them  – favoring nature hikes in Nashville than hedonistic acid-fueled night parties.

Their healthy lifestyle is a breath of fresh air to the world of rock n’ roll, as is their music – though reminiscent of7 70s golden age of rock n’ roll (they are most frequently compared with Led Zeppelin, and even Robert Plant is much impressed).  And it’s not just Robert Plant, Greta Van Fleet has garnered some legendary fans including

Elton John, who asked them to play his annual Oscars party last March.  The piano man has said to the band, ‘This is probably the best rock & roll I’ve heard in 20 f*cking years,’ shares Sam.

But what is the rock n’ roll to band and how do they plan to make it cool again for people in their own age bracket? Josh says,

“Rock & roll to us is liberation. A reminder that we as human beings have a voice […] But I don’t want people to hear me talking about rock & roll and think I mean the kind of sh*t they’re putting out now.”

The boys were only barely out of middle school when they began playing gigs in biker bars around their hometown of Frankenmuth, Michigan. Even at a young age, they were already into the kind of music they are making today (the lies of B.B. King, Clapton, Hendrix, and of course, Zep), and they are only refining their sound throughout the last few years. Jake admits,

“All the modern music we were exposed to is stuff on the radio, and I can’t stomach that”

Good thing they are here to bridge the disconnect the younger generation has to the kind of music they are reviving. And their sold out shows are a testament to that, almost selling out their summer tour which are held at 2,000- to 3,000-capacity rooms, also including Coachella.

For their upcoming album, the band promises to explore “spaces unseen” in their new music. And they are welcoming their diverse fans – both young and aged, with open arms.