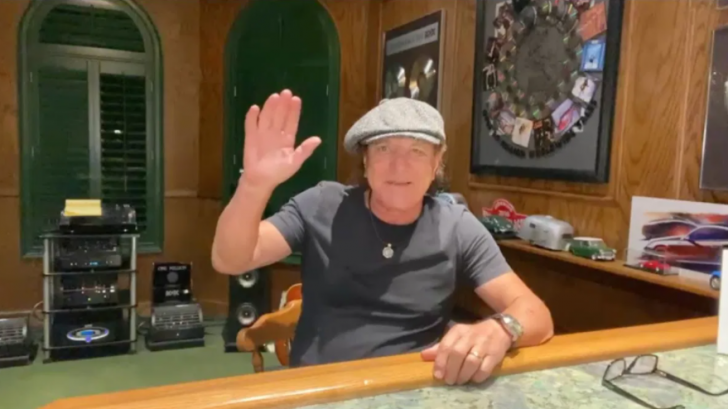 Brian Johnson is grateful to fans for sticking with AC/DC when the future seemed in doubt. Brian was forced to retire during the Rock or Bust tour in 2016 as a result of a hearing loss. At the time, guitarist Malcolm Young was at the end of a career-ending battle with dementia, and drummer Phil Rudd had been fired on legal grounds. Bassist Cliff Williams just decided to retire.

With no clear future ahead, it seemed that only Angus Young and his nephew Stevie (who replaced Malcolm) were the ones who would save the ship. The members then got together at Malcolm’s funeral in 2017 and a new project was launched. It is likely that the result, Power Up, was the result of that talk.

“We knew we’d done a pretty good thing,” Johnson says in a new video message, which you can watch below. “We wanted to make Malcolm proud, and you’ve made us proud because we’ve made Malcolm proud – if you can get your head ’round that.” He added: “We’ve just had a wonderful time. … Four years ago, we were all but over, some people thought – but they forgot about the AC/DC fighting spirit.”

He urged fans to “stay tuned” for a new promotional clip, which would be recorded with the group in different places as a consequence of coronavirus restrictions. “None of us have ever done this before, so it’s going to be brilliant, standing by yourself, miming to a microphone – because you know that we’re miming and we know that you know,” Johnson said with a laugh. “Angus is going to be playing down in Sydney; Phil’s going to be whacking the drums in New Zealand. Cliff … might even come up to join me because he’s not too far down the road; and Stevie somewhere in England.”

Johnson said the enthusiasm of Power Up’s release tasted like “the first record I’ve ever brought out,” then unexpectedly listed Malcolm as a current member. “Malcolm,” he said to himself. “I can’t help it.”

Reverting back to the point of appreciating fans, Johnson added: “You stuck with us through thick and thin, and we’ll never forget it. We never will. And when this is all over, guys – when this crap is over – we want to see you in your hometown. We’ll try everything we can to get there, play for you live and play these great tunes.”