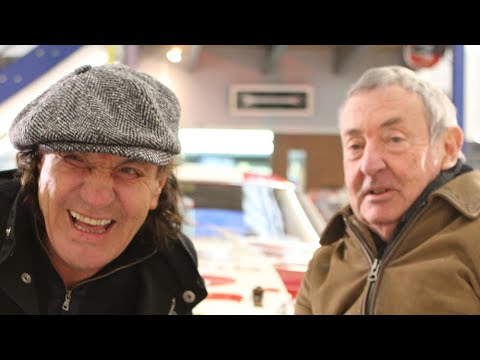 You surely know by now that both Brian Johnson and Nick Mason are car nerds. But there is something extraordinary about seeing the two rock legends giggle with joy looking at the cars Mason’s have collected.

Featuring classic Aston Martin, McLaren, and a fine selection of other race cars, the rest of Mason’s garage is no less impressive.

The son of a famous car racer, he still owns the Bentley his father raced when he was little. It is with that car where the drummer assures that his love for cars began.

In a reunion for the American series ‘A Life on the Road’, the AC/DC vocalist toured the garage of the drummer and founder of Pink Floyd, Nick Manson.

As shown in this episode fragment of the series, Nick Mason takes Brian Johnson on a tour of his spectacular garage where he shows him collector’s cars from all eras and most surprisingly all in perfect condition.

After the incredible car tour, AC / DC’s Johnson is interested in taking a tour of the classic Ferrari 250 GTO which Manson agrees to and they both go for a ride in this incredible collector’s item.