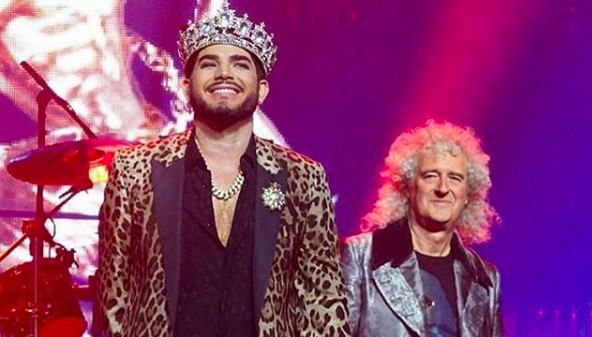 From Idol to Queen

Adam Lambert is known as a vocal powerhouse, an American Idol contestant who broke stereotypes, and now the frontman of Queen. Of course, no one could ever, ever replace the greatest rock icon that was Freddie Mercury, even Lambert himself acknowledges that. But he’s apparently that good enough for Brian May and Roger Taylor to take him on and have him tour with them all over the world.

Coincidentally, or maybe pulled by fate, Lambert’s sang Queen’s “Bohemian Rhapsody” for his American Idol audition in 2009 to the utmost awe of the judges, especially of notorious harsh judge Simon Cowell. Lambert has gone full circle since.

People may actually forget that Lambert did not actually win his season of American Idol. He lost the title to Kris Allen but it certainly did not stop Lambert from having such a successful career. His phenomenal voice has taken him to the top. He also placed fifth on the list of the 120 best contestants in American Idol’s history.

The Idol runner-up has had three hit albums, and his debut ‘For Your Entertainment’ reached no 3 in the Billboard charts, his follow up, ‘Trespassing’ was no 1 and ‘The Original High’ peaked at no 3.

Lambert has had a very successful solo career thus far. He has sold out tours across the world to much critical acclaim. He’s known to hold theatrical and flamboyant performances that surely showcase his superb vocal command. He reportedly had his voice insured for $48 million in 2012.

It was also his range and flamboyant stage command that got the attention of Queen as he too was very much inspired by Queen growing up and throughout his professional life,

In a May 2018 interview with Attitude magazine, he said: “Obviously Queen really inspired me.”

During his season on American Idol, Queen first performed alongside Adam. Since then, starting 2011 the rock legends and the superb singer have collaborated as Queen + Adam Lambert supergroup.

After a few short performances and appearances, they embarked on a successful 66-date world tour in 2014.  Guitarist Brian May always sings praise about the singer’s “awesome range and power”. Drummer Roger Taylor, on the other hand, said that Lambert had “the best range I’ve ever heard”.

Lambert shared to Wonderland magazine,  “At the beginning of working with Queen I was completely intimidated by the idea! I was like ‘What? Are you serious? You guys really want me to do this?’

“I was intimidated by what fans would say and probably expect of me. Being in the shadow of Freddie Mercury is kind of a mind-f*ck, you know?

“But over the years, I got comfortable with the show and the set of songs.”

In a May 2018 interview with Attitude magazin,  Lambert shared how he has found his own style when he’s singing with Queen, saying,

“At first I would try to hit the same notes and runs [as Freddie], then I learned to just sing the songs as they work for me, and in my style.”