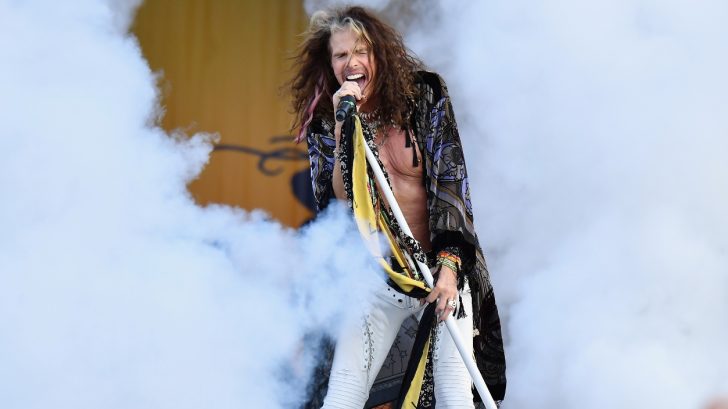 Two of the classic rock heavyweights are Aerosmith and KISS, but that’s about all the bands would say they have in common. For decades, the two groups have been locked in a bitter feud with each other. It all started when their roadies got into a knife fight on tour in 1976.

A feud broke out between Aerosmith and KISS after their roadies got into a knife fight on tour in 1976.

Fans have always known that Aerosmith and KISS never liked each other. Over many decades, they have constantly cast shadows on each other. However, according to Aerosmith frontman Steven Tyler, the feud between the two bands began after their roadies got into a knife fight on tour in 1976.

“I remember when we went out with Kiss in ’76 or something,” Aerosmith’s frontman, Steven Tyler told The Cowhead Show on WHPT Tampa. “One of our roadies got into a knife fight with their guys, so I hated them ever since.”

Tyler even went on to call KISS a comic book rock band with “spackle faces and couple of hits.”

“A Kiss lick and a Joe Perry lick — two different worlds,” Tyler continued to tell The Cowhead Show. “And I, sometimes, depending on the time of day, get offended. I hear that and go, ‘It’s all right, but do they really mean it?’ And, ‘What’s this all about?’ And that’s why I think Aerosmith has been around forever. We really do take ourselves seriously.”

Perry added, “It’s two different animals. [Kiss] went the theatrical way and used rock ‘n’ roll kind of as their soundtrack, and for Aerosmith, the music is our show.”

Tyler then went on to say that Aerosmith was “always a band that had something to prove. We always wanted to blow off whatever band it was.”

Of course, Stanley never backed out and had something to say as well.

In his book Face the Music: A Life Exposed, Stanley has some pretty nice things to say about Aerosmith:

“In some quarters there was more credibility in being a rock band, but the impact of being an all-encompassing phenomenon was more widespread and diverse,” he said. “It made us more interesting to newspapers and magazines, little kids, and preachers.”

Stanley was a bit surprised when he heard Tyler’s comments. Rockline‘s host Bob Coburn told Tyler’s comments to Stanely, and his response was this: “Look, I love Steven and Joe, and Aerosmith is a great band. Maybe Steven’s feeling a bit full of himself because he’s got an album coming out.

“The reality is, in 2003, we did a co-headlining tour and everything was 50-50, but Steven wanted very much and insisted that they close the show. I really don’t care, because as far as I am concerned, one way or another you’re going to have to come up on the stage, so you can go on before us or after us.

“And that being said, he certainly had a chip on his shoulder back then. There is some sort of — ambivalence or looking down his nose a bit towards Kiss. So I have to say that seeing him go on after us, to play to an underwhelmed audience and see people walking out didn’t feel too bad to me.

“Make no mistake. I have been doing this as long as he has — and I take myself every bit as seriously as he does. At the end of the day, I think that the tale got told.”