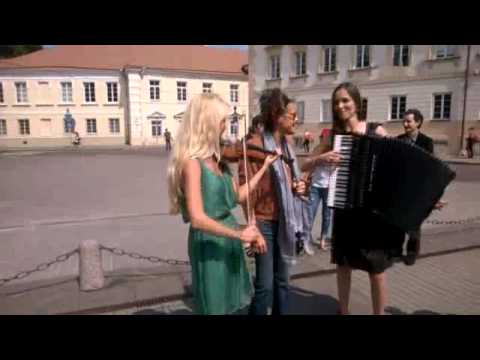 The way a rock musician handles his followers, or even average people, can reveal a lot about him. Whether it was performing for a small girl on a flight, inviting a fan onstage, or accompanying a strange busker for a spontaneous collaboration, Steven Tyler demonstrated why he is everybody’s favorite. Tyler is indeed not unique in approaching unsuspecting street artists and taking in and appreciating their ability.

This occurred in Lithuania after he encountered two street entertainers. Not only did he request a photo with the two attractive and skilled females, but he also performed a great song, much to the surprise of the bystanders. Another thing you will enjoy about this (apart from Steven Tyler himself) was that he didn’t attempt to grab the show, which might have been obvious considering that everybody who enjoys music clearly recognizes who he is.

Certainly, it was far from flawless, but that’s what makes it so appealing — its quirkiness. And Steven was obviously having a wonderful time! He’s undoubtedly grown accustomed to playing in the front of hundreds of cheering fans within arenas, but still nothing beats a spontaneous improvisation with everyone having a great time.